& Then there is this: USAF redeploys X-37B climate chaos, earthquake and tsunami inducing orbital HAARP weapon

The Infamous NASA Keeping Up Its War Programs on Humanity 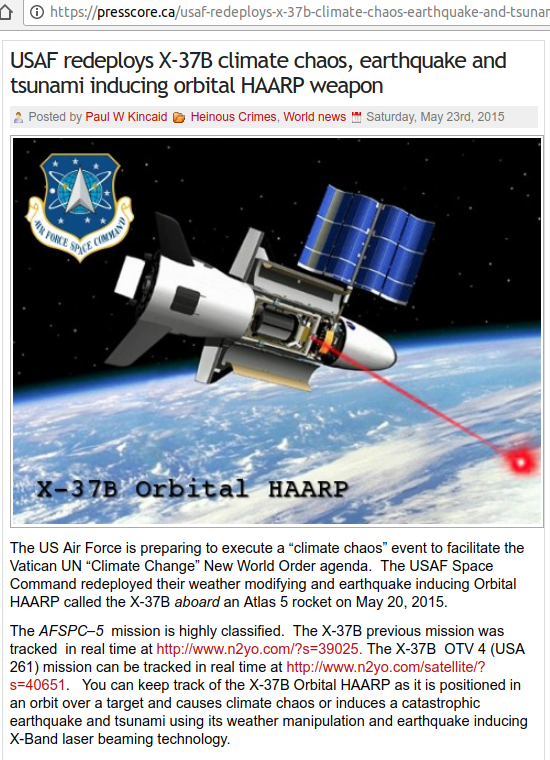 The USAF developed the X-37B as an orbiting HAARP weapon system. Because of its capabilities in causing both widespread and localized destruction by either manipulating the weather and causing climate change or inducing earthquakes and tsunamis, the X-37B is classified as a weapon of mass destruction (WMD), banned by international treaty “Environmental Modification Convention(ENMOD)”.

The X-37B was developed by the USAF to replace the Alaska land based HAARP and achieve the goal of Prompt Global Strike – a United States military effort to develop a system that can deliver a precision-guided conventional weapon airstrike anywhere in the world within one hour, in a similar manner to a nuclear ICBM.  The X-37B can be precision-guided and deliver an airstrike anywhere in the world from orbit.

How is the X-37B an Orbital HAARP weapon system? The X and B of the X-37B stands for X-Band. X-band is a segment of the microwave radio region of the electromagnetic spectrum. X-band is used in radar applications including continuous-wave, pulsed, single-polarization, dual-polarization, synthetic aperture radar, and phased arrays (HAARP).  The orbiting X-37B is outfitted with an Active directional X-band beaming Phased Array, making it a Star Wars weapon. Phased arrays creates a very narrow beam, aimed electronically, to precisely and rapidly scan, or focus energy, on the ionosphere (and steer the jet stream or create and steer hurricanes and tornadoes) or on land (and trigger an earthquake) or at sea (and trigger an earthquake induced tsunami). The 37 refers to the scintillation index at X-band (m = 0:37).

The orbiting X-37B X-band phased array antenna consists of thousands of antennae driven by transmit/receive (T/R) modules. T/R modules are multi-functional circuits that can transmit, receive, and amplify signals. While in orbit the unmanned X-37B can be precision-guided remotely by the United States military to any part of the Globe and positioned to heat up the ionosphere above a target area and create “climate chaos” (both widespread or localized extreme weather conditions) or bombard the Earth below with either X-band microwave energy or tungsten kinetic energy projectiles and trigger an earthquake and or tsunami.

US Patent 4686605 A provides us with concrete evidence and a scientifically proven correlation between seismic activity and the ionosphere, through the control of RF (Radio Frequencies) artificially induced force fields, which HAARP was designed and built to do. HAARP patents gives concrete and irrefutable evidence that they were built not only for ionosphere heating weather modification (simulate/fake climate change) but to induce earthquakes and tsunamis by transmitting earthquake inducing radio frequencies into the ground or ocean and cause changes in the earth’s magnetic field.

An earthquake is defined as “a sudden release of energy in the earth’s crust or upper mantle, usually caused by movement along a fault plane or by volcanic activity and resulting in the generation of seismic waves which can be destructive” A tsunami is defined as “a long high sea wave caused by an earthquake, submarine landslide, or other disturbance.”

Before the X-37B was built they induced earthquakes and tsunamis by beaming the earthquake frequency (2.5 hz) into the ionosphere from ground based HAARP Alaska or the US Navy sea-based HAARP, SBX-1,  and the ionosphere deflected the very narrow beam to a preselected target on the earth’s surface or ocean floor.  With the X-37B now in orbit they can beam the narrow beam earthquake inducing radio frequencies from directly over the target (Haiti, Japan, Iran, waters off Puerto Rico or California, Yellowstone National Park, New Madrid fault line).

Earthquakes identical in depth and magnitude, on the same fault are only caused by induced frequency linear projection – HAARP beaming.  A synchronized orbiting satellite can generate concentrated frequency projections targeting specific points on the earth’s surface below.  The signature of a HAARP induced earthquake are earthquakes at 10 km depth and with no fore shocks.  The earthquake inducing radio frequency was determined to be 2.5hz  but since scientists around the World can now detect and identify a HAARP induced earthquake by that frequency the United States is now using sustained propagations of between 2.0 and 3.0.

Chris of the family Masters favorited Phyllis Maka's blog post The Brits are waking up to the CORONAhoax as a means to Orwellian tyranny. (Video)
1 hour ago