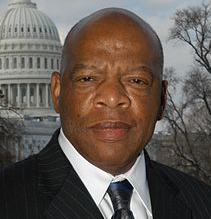 “Often called one of the most courageous persons the Civil Rights Movement ever produced, John Lewis has dedicated his life to protecting human rights, securing civil liberties, and building what he calls The Beloved Community in America. His dedication to the highest ethical standards and moral principles has won him the admiration of many of his colleagues on both sides of the aisle in the United States Congress…”

John Lewis is to be respected for his work in the civil rights movement regarding the plight of the American Negro.

I found it inappropriate to see the Democrats continuing to bash President Donald Trump at Congressman Lewis’s funeral. This was not the time or place to politicize his death. Former President Barack Obama used Rep. John Lewis' funeral to issue a stark warning that the voting rights and equal opportunity the late civil rights icon championed were being threatened heading into the 2020 election.

What Obama was referring to was Trumps fear of not having a legitimate and honest election in 2020 when using mail-in ballots. The Democrats are doing all they can to make sure that the nation uses mail in ballots that are wide open to fraud. President Trump has no problem with Absentee Ballots because they are handled in legitimate ways to verify their integrity.

President Trump has been criticized for not attending Congressman Lewis’s funeral. It should be pointed out that Lewis, as a form of descent, did not attend President Trump’s or George W. Bush’s inauguration. He believed they were both not legitimate presidents. President Trump was at odds with the congressman’s voting record on constitutional issues, like the right to bear arms which was in direct opposition to conservative support of the second amendment. The congressman’s record for not voting for constitutional issues is consistent with the low score of nearly all democrats. A review of the “Congressional scorecard” shows that the republicans consistently score higher than the democrats when voting on constitutional issues.

cheeki kea commented on Phyllis Maka's blog post BLOODY DORKS INTERFERING WITH SHOPPING CART PAGES ONLINE
"Wow, what ever your saying on fb must be awesomely True for them to panic so much, cool. Keep up…"
8 hours ago

"I remember the asbestos scandal james hardie and their bs and lies until they had to pay out 1.6…"
9 hours ago

cheeki kea commented on Phyllis Maka's blog post BLOODY DORKS INTERFERING WITH SHOPPING CART PAGES ONLINE
"I hope the internet spies do all go to jail soon, the sooner the better. At least with the border…"
9 hours ago

cheeki kea commented on Phyllis Maka's blog post BLOODY DORKS INTERFERING WITH SHOPPING CART PAGES ONLINE
"There's very little check Out when (They) check In. Countdown and out are the self appointed…"
12 hours ago

Phyllis Maka commented on Phyllis Maka's blog post BLOODY DORKS INTERFERING WITH SHOPPING CART PAGES ONLINE
"I'm on Linux (which ever OS that doesn't have firefox on it), and use Opera or Chrome…"
15 hours ago