If you don’t pay the money that the bank gives you back to the bank, plus interest, the bank then takes your stuff !

(It really doesn’t want you to repay the so-called loan; it would simply rather just take your stuff). http://www.wakeupkiwi.com/news-articles-67.shtml#Con 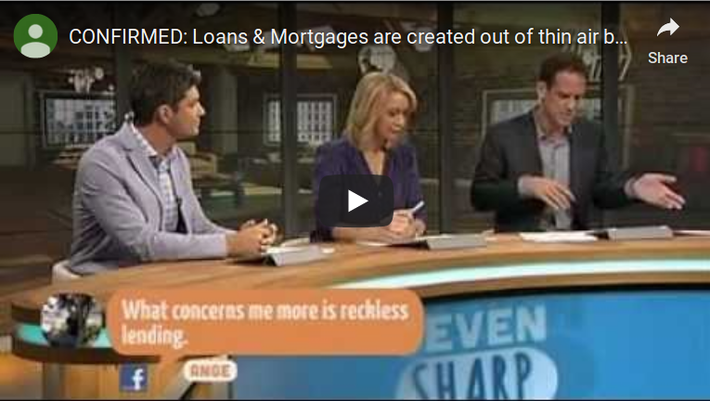 A deposit is not actually a deposit. It’s not a bailment. It’s not held in custody.  At law the word “deposit” is meaningless.

The law courts and various judgments have made it very clear that if you “give” your money to a bank, even though it’s called a “deposit”, this money is simply a loan to the bank.

So there is no such thing as a deposit. It is a loan to the bank. So banks borrow their money from the public.

“Surely they are lending money?” you say. Not at all. Banks don’t “lend” money.

Banks - again at law it’s very clear - they are in the business of purchasing “securities”. That’s it.

That’s what’s happening. What the bank is doing, is very different from what it presents to the public that it’s doing.

But, you say, “So the bank purchases my promissory note, but how do I get my money?”

The bank will then say, “You will find it in your account with us.” That would be technically correct.

If they say, “We’ll transfer it to your account”, that would be wrong because no money is transferred at all, from anywhere, inside the bank, or outside the bank.

Why? Because what we call a “deposit” is simply the bank’s record of its debt to the public. Now the bank also owes you money, and the bank’s “record” of the money it owes you is what you think you’re getting as money.

That’s all it is. And that is how the banks create the money supply. The money supply consists of 97% of bank deposits, and these are created out of nothing by the banks when they “lend”, because they invent fictitious so-called customer “deposits”.

Why? The bank simply restates - a slightly incorrect accounting term - what is an “accounts payable liability” arising from the loan contract, having purchased your “promissory note” as a customer deposit, but nobody has deposited any money.

I wonder how the FDIC deals with this because in the financial sector you’re not supposed to mislead your customers.

In such a case, you loan (“give”) the bank the title to your collateral via your signed “promissory note / security” and the bank monetizes this by selling it to the non-federal Federal Reserve Bank to get the money the bank loans (“gives back”) to you disguised as a loan.

In other words, you “give” the bank your “signature” via you “promissory note / security” which the bank then monetizes via the non-federal Federal Reserve Bank, and the bank gives you back the value of your signature as a so-called “loan”.

We are on a “promissory note” standard, instead of a “gold” money standard.

If you don’t pay the money that the bank gives you back to the bank, plus interest, the bank then takes your stuff ! (It really doesn’t want you to repay the so-called loan; it would simply rather just take your stuff).

Comment by Chris of the family Masters on July 23, 2019 at 4:13pm
About 9 years ago I discharged the credit card 'debt' by demanding proof of lending. I made a conditional acceptance offer.

There is one thing that Americans will agree on and that is that the country is in a mess. The…See More
26 minutes ago
0 Comments 0 Favorites

There are a series of rumors such as glass-breaking cops, and now this; BRICK GATE. There are a handful of witnesses who record piles of bricks conveniently ...
1 hour ago
0 Comments 0 Favorites

Doc Vega commented on Doc Vega's blog post Inside My Head
"James, thanks Buddy!"
2 hours ago

Doc Vega commented on James Roberts's blog post Exposed! Stockpiled Weapons Supplied to Rioters (Multiple Cities)
"Our police are being allowed to be target practice by these fucking hired outside professional hell…"
2 hours ago

Doc Vega commented on Doc Vega's blog post Someone's Out there
"James! That is fucking hilarious! Man, do I remember that line!  That was excellent! …"
2 hours ago

James Roberts replied to Guardian of Scotland's discussion George Floyd did die. He also had Fentanyl and other drugs in his system. Yet the death was ruled a homicide.
"Right, he has no chance at a fair trial, no more than James Fields, who was convicted of the Murder…"
3 hours ago

James Roberts favorited Guardian of Scotland's discussion George Floyd did die. He also had Fentanyl and other drugs in his system. Yet the death was ruled a homicide.
3 hours ago

James Roberts commented on Chris of the family Masters's blog post How Communist Jews Weaponized Blacks
""The Jew is using the black for muscle." - George Gobel, in The Blues Brothers"
5 hours ago

James Roberts commented on James Roberts's blog post Exposed! Stockpiled Weaponsd Supplied to Rioters (Multiple Cities)
"Who has the money to organize this? You won't see George Soros investigated and prosecuted,…"
5 hours ago

Thanks to David Knight for mentioning this on his show today!…See More
5 hours ago
3 Comments 0 Favorites