Leaf-blower wars: How Portland protesters are fighting back against tear gas and forming ‘walls’ of veterans, lawyers, nurses 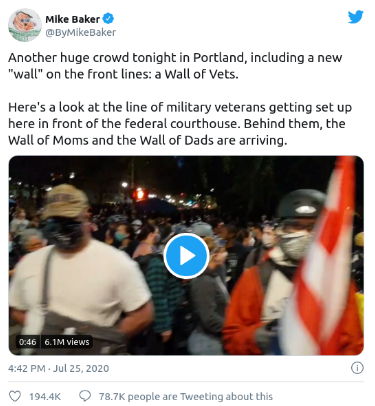 PORTLAND, Ore. — The tear gas started early Friday night, interrupting a line of drums and dancing, chanting protesters, an artist painting in oils underneath a tree in the park, and a man with a microphone speaking about the issues of racial justice and policing at the center of these nightly demonstrations.

‘‘Hey guys, don’t panic, don’t panic,’’ the man said from the steps of the Multnomah County Justice Center, one block over from the federal courthouse in downtown Portland. ‘‘All you first-timers out here, it’s just tear gas. Everybody just relax.’’

As if on cue, a brigade of orange-shirted men with leaf blowers descended on the cloud, revved their engines, and blew the tear gas away. The crowd cheered.

Every night for more than a week, federal agents have been unleashing a barrage of tear gas on crowds of demonstrators, a small number of whom have lobbed fireworks at the federal courthouse, set fires, and tried to tear down a tall, reinforced metal fence surrounding the building. The noxious fog burns and stings. Some people who get hit with the dense plumes of chemicals that cloud Portland’s streets each night feel like they can’t breathe, like their eyes are on fire, like they might vomit onto the asphalt.

Though some Portlanders have been able to get respirators, goggles, and gas masks to protect themselves from the worst effects of the riot control agent known as CS gas, many others have turned to a familiar landscaping tool to blow the chemicals away: leaf blowers.

The loud, pressurized air machines typically used to clear grass, leaves, and other lawn debris are surprisingly effective tools at clearing caustic chemicals from the air. They’re so effective that on Friday night, federal agents frustrated at being caught in up in a redirected cloud of tear gas, showed up to the demonstration with their own handheld blowers.

The leaf-blower wars were on.

‘‘I’m totally impressed with all the courage we’re seeing from just normal people who have taken it on themselves to come out here and stand up for our right to protest,’’ said Eddie, a 35-year-old Portlander who declined to give his last name out of fear of retaliation from federal officers.

Eddie, who wore a gas mask and leather jacket for protection from projectiles, said that although he’s not a dad, he was inspired by the formation of the ‘‘Leaf blower dads group’’ to bring a blower to the demonstrations. He even fashioned a leather strap out of a belt so he could sling it over his shoulder and carry it around all night.

‘‘You’ve got the moms out here on the front line and the dads backing them up with the leaf blowers,’’ he said. ‘‘It’s pretty amazing.’’

CS gas, or 2-chlorobenzalmalononitrile, has been classified as a chemical weapon. Its use is banned on the battlefield by nearly every country in the world, including the United States. But it is legal to use domestically by police and federal agents to disperse crowds.

Typically, police fire the agent once or twice to clear crowds and encourage people to move away from an area, said Michelle Heisler, the medical director of Physicians for Human Rights. But in Portland, federal agents have been unleashing the chemicals repeatedly for hours. This sustained cascade makes it difficult for peaceful demonstrators to avoid being hit and runs the risk of ensnaring bystanders in the area, she said.

‘‘The people here are not dispersing, so these federal officials are just launching massive amounts of it,’’ Heisler said. ‘‘It can blind people. It can kill people through chemical burns — especially people who have asthma or other lung diseases. This is dangerous stuff.’’

A group of self-identified Portland dads, inspired by the ‘‘Wall of Moms’’ that forms a protective human shield at the front of nightly protests near the Mark O. Hatfield Courthouse, set out to help clear the air at protests by arming themselves with leaf blowers. They are known as ‘‘DadBloc’’ and ‘‘Leaf-Blower Dads’’ and turn up to the protests wearing orange shirts to complement the moms’ yellow ones.

Each night, their numbers have swelled. Friday, they were joined by other groups — the veteran-led Wall of Vets, green-shirted Teachers Against Tyrants, the pizza-box carrying ChefBloc, health-care workers in scrubs, and Lawyers for Black Lives, who showed up in suits and ties.

Central Scrutinizer commented on Aaron's blog post “IT’S A FULL-BLOWN COMMUNIST PLOT” — Whistleblower Reveals the Plan
"Where can one acquire these "Weaponized Fireworks"?? Sounds like a blast (pun intended)"
3 hours ago

"OMG, you are one clueless b00b... 1.)anybody who keeps thinking these felons are there for We, The…"
3 hours ago

Phyllis Maka commented on Phyllis Maka's blog post New Zealand is going full-blown fascist after Tony Blair advisor installed as prime minister
"They have these new types of smoke alarms they put in just this year, in state houses, although…"
5 hours ago

Chris of the family Masters commented on Phyllis Maka's blog post New Zealand is going full-blown fascist after Tony Blair advisor installed as prime minister
"Our communist made a rule no more than 10 people in a house any time. Are their henchmen going to…"
7 hours ago

Phyllis Maka commented on Phyllis Maka's blog post New Zealand is going full-blown fascist after Tony Blair advisor installed as prime minister
"Tony Blair is war criminal didn't know she was his adviser it makes sense now. We are not the…"
8 hours ago