Central Barcelona has reportedly been paralyzed as mass protests which international reports estimate to number over a half-million people are driven by outrage at harsh prison sentences for pro-independence leaders handed down by the top Spanish court.

Protest leaders are vowing "the streets will be ours" as they push for Catalan independence, and as riot police have begun clashing with stone-throwing activists, who are also in some places of the city setting makeshift roadblocks ablaze. 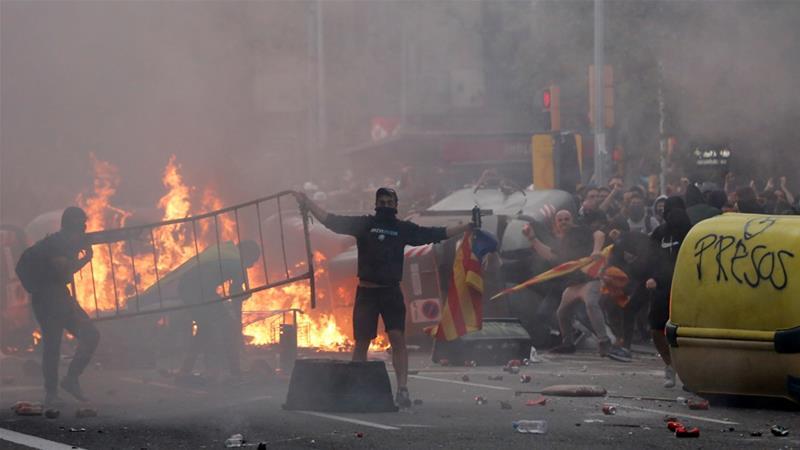 Pro-Catalan independence protesters near the police headquarters in Barcelona on Friday, via the AFP.

With night fall, reporters on the ground are describing what's beginning to resemble a war zone, with increasing violence against police, as also both far-left and far-right agitators are said to be infiltrating the crowd and engaged in increasing violence and vandalism.

The turmoil began Monday after Spain’s Supreme Court handed out extreme prison sentences to nine politicians who spearheaded the referendum on Catalonia’s independence in 2017. 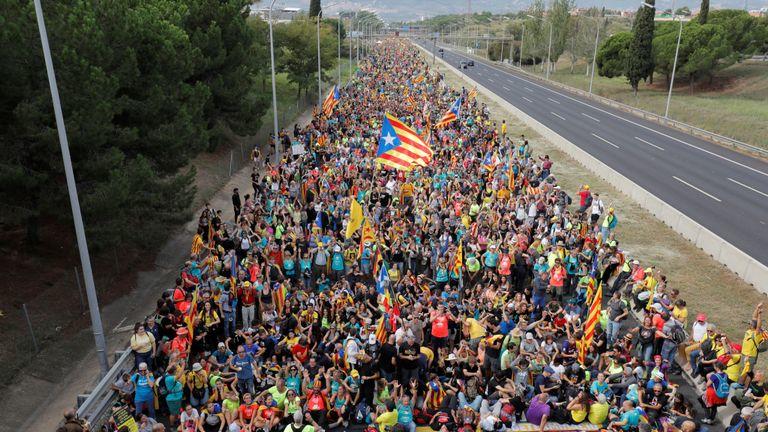 They were given a whopping 13 years behind bars for what amounts to pro-independence activism, but which Madrid sees as an "illegal" secession attempt which undermined the state.


Though protests started out relatively minor by some student groups, a mass body of people began marching from various parts of Catalonia earlier in the week, and then began inundating Barcelona starting at about noon on Friday, resulting in absolute gridlock.

In total about five separate marches converged at once on the city, also amid a general strike in solidarity with the jailed activists.

Five #MarchesForFreedom, coming from every corner of Catalonia, have arrived today in Barcelona to protest against the unjust imprisonment of the Catalan leaders. Later in the day, a mass demonstration has taken place in the city center. Free them all #DemocracyInJail 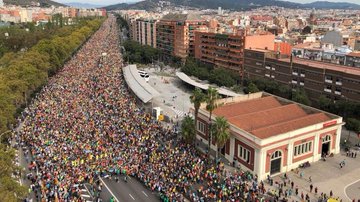 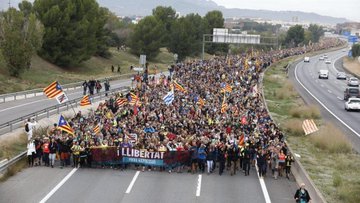 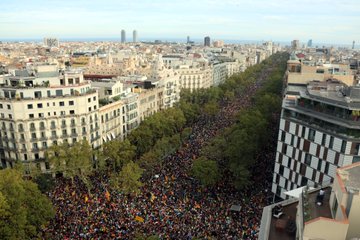 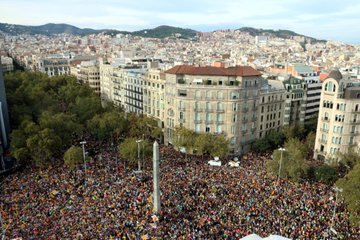 Acting Spanish Prime Minster Pedro Sanchez warned those inciting riots and violence would face the swift justice of security forces: "There is no space for impunity in relation to the serious acts of violence we have witnessed over recent days in different cities in Catalonia," he said.

Indeed it appears the state's response is set to escalate, give at the end of the week of unrest Spain's civil guard is to be deployed in Barcelona, Madrid authorities have announced. The civil guard is essentially a militarized police force which has authority to deploy across the whole country. 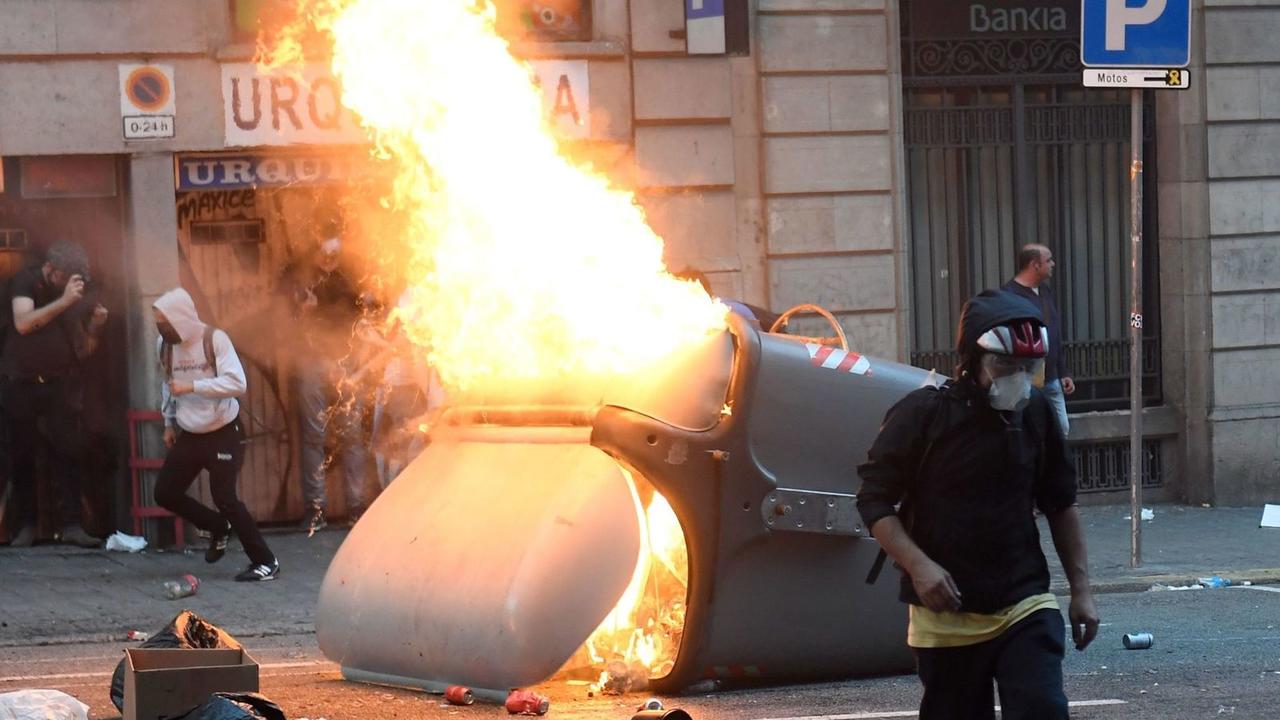 Meanwhile, demonstrators were said to have blocked at least 20 major roads in and around Barcelona, also causing a much anticipated soccer match between Spanish rivals Barcelona and Real Madrid to be postponed.

#Barcelona.
5th day of protests against an oppressive Spain that charges against its own civilians in Catalonia.

Someone PLEASE tell me why the police needs to do this against peaceful protesters.
Europe, open your eyes!!!#SpainISaFascistState 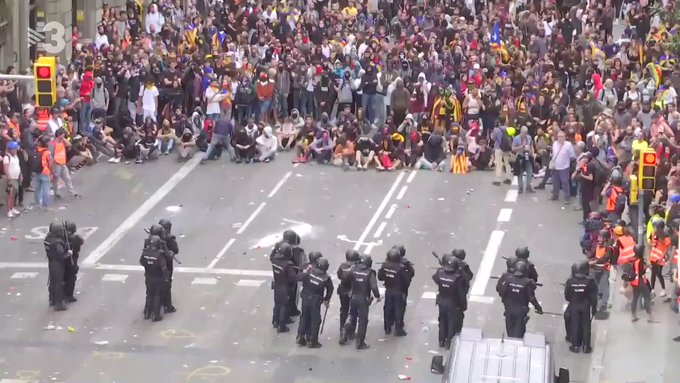 Throughout Friday about 100 people were reported injured as the protests spread throughout the northeast region, a number expected to grow. 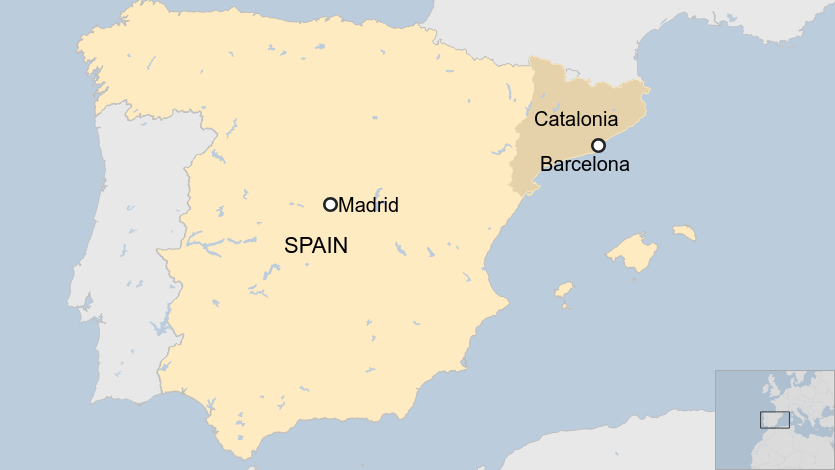 Home to about 7.5 million people, the wealthy and linguistically distinct Catalonia region has its own parliament and flag; however, Catalan nationalists have long complained Madrid over-taxes the region for the sake of Spain's poorer regions and cities.

"I remember the asbestos scandal james hardie and their bs and lies until they had to pay out 1.6…"
11 hours ago

cheeki kea commented on Phyllis Maka's blog post BLOODY DORKS INTERFERING WITH SHOPPING CART PAGES ONLINE
"I hope the internet spies do all go to jail soon, the sooner the better. At least with the border…"
12 hours ago