THE CAFR SWINDLE: THE BIGGEST GAME IN TOWN

CAFR (Comprehensive Annual Financial Report) Collateral Accounts: Taxes And Government Fraud Against Citizens Around The World
July 7 2015 | From: CAFR1
[Taxation and selling of government assets is the massive conspiracy, when the hidden surplus of Trillions of dollars is not discussed by the bankers and government controlled media.] 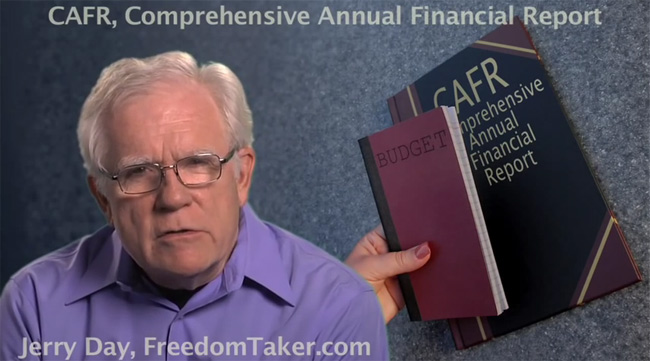 Taxes are no longer necessary. This video exposes a deliberate and massive swindle that is perpetrated by every government agency from your local school district all the way up to the State / Federal / National governments.

This brief video does an excellent job of exposing how the 'budget' scheme actually operates and how local and national government has been systematically screwing us all since - forever. Warning: this will make you furious!

Below the video is an earlier article re-posted with more information. It is so critical that the public are aware of this information - the governments and their sellout politicians know what they are doing and must be held accountable.

A key agenda behind the CAFR swindle is ensuring that communities and countries never make any real progress and in fact degrade over time. It's all part of the Agenda 21 / NWO grand plan.

It is perhaps not widely known that governments and councils use complicated accounting practices to hide their wealth from the people, providing 'justification' for rates hikes and other methods of wealth extraction.

In a world where council rates and infrastructure costs are conitinually on the increase, in most places the CAFR (Comprehensive Annual Financial Report) Accounting system is used, which hides wealth and provides the 'powers that be' with more reason to financially rape and pillage the people.

While much of the content below pertains to the US, the principles in play with CAFR Accounting are used in most countries.

First, what is a CAFR? A CAFR (Comprehensive Annual Financial Report) is government's complete accounting of "Net Worth".

It has been reported that trillions of collective dollars not shown in government Budget reports are shown through Government CAFR reports and they are virtually never openly-discussed by the syndicated NEWS media, both the Democratic and Republican Party members, the House, Senate, and organized public education.

With, and being that the CAFR is "the" accounting document for every local government, and with it being effectively "BLACKED OUT" for open mention over the last 60 years, that this fact of intentional omission of coverage is the biggest conspiracy that has ever taken effect in the United States. Read more at: Rense

As more and more cities, counties, districts, and states across America falsely declare their near - insolubility, bankruptcy warnings, fiscal deficits, and budgetary quandaries, I am left with the sinking feeling that “the people” just can’t wrap their heads around how to point out these misleading and downright fallacious claims made by their councils, mayors, and professional con-men in places of public trust.

So today I want to share with you a simple way to factually stand before your local or state political “leaders” and give indisputable proof that, when stating the “facts” about their own budget shortfalls, limited choices, and necessary raising of your hard-earned monies as taxation (revenue) to “balance the budget”, your own little criminal syndicate of elected mayors and council men and women are lying bold-faced to the entire citizenry through the act of subterfuge and omission.

This little factoid is uniform throughout the entirety of the financial structure of government, as reported in the audited Comprehensive Annual Financial Report and required by Federal and State laws. It is always reported in the same fashion and under the same heading as all other governments (municipal corporations).

The figures are not disputable. The truth is unshakable. And yet the doublespeak will never end… For even as you present this one simple line item to the scoundrels themselves behind their raised and protective pedestals, they will still attempt to deny what is undeniable, be it in ignorance or in deceit; usually a mix of both.

Read the full story at: RealityBlogger

Update: How The New Zealand [And Other Western Countries] Government Hides Billions (Trillions) In Slush Funds
October 9 2014 | From Narkive

Globally, The Biggest Financial Scandal In History / Annals Of Mankind

Budget reports: Only need to show what is necessary to meet obligations

Transactions for local governments are missing

Total worth is missing

United Nations (1946) created CAFR to take over and steal wealth

Only shows shortfall of budgetary revenue versus annual operating costs for the year, never shows 'cream'

US Federal $30 Trillion cream at top not reported


Total non-signatory to the 1740 Waitangi Treaty (with amusing numerous versions), this Tainui Kiingitanga warrior demands from the New Zealand government [the following]:

1. What Is The Total Cash Gross Receipts Income ?

2. What Are The Total Investments ?

5. What Are The Liquid Assets ? (Billions / Trillions)

We Know Know That The Constant Cries For More Taxation Are Entirely Bogus:

New Zealand CAFR (Comprehensive Annual Financial Report) where literally hundreds of Billions of dollars are hidden or not listed / discussed by the same banker controlled media.

Taxation and selling of government assets is the massive conspiracy, when the hidden surplus of Trillions of dollars is not discussed by the bankers and government controlled media.

Definitely, this utopia world they have created for themselves is totally RS, absolute BS and they will get their heave-ho come next election, if not sooner, or maybe there won't be any more of that, things are changing, all the OLD traditional systems seems to be falling apart. Depends how soon other countries will leave the EU (the Vatican's parliament) with Britain first, then France, Italy, Sweden, Netherlands... don't know about Australia but New Zealand, needs to get out of that QE2 strangle grip that fraud has on us. Trump needs to get back in. Mexico, have taken back their country, hopeful Obrador can hold it that way for the next 5 years.

Big lying Govt.nz would well have us believe it Has been thrown out, with a shining example of lunacy manifesting into a "wellbeing" budget instead of a traditional one. Imagine that valued on "social connectedness" when it's all just been shot out the window (of opportunity) All this touchy, touchy feel good factor is BS and going nowhere, except in decline.

The whole thing needs to be thrown out, money is fake anyway, and the accountancy of it all is practically madeup to make it look either good, or bad, depends on who they're pandering to, to the public, or to themselves, they have a story for each episode.

'At the top of the heap' you know this?...   "the Central Banks and commercial banks can never go bankrupt because the money created is never recorded in their cash accounts and maintain this practice since they're not responsible to anyone except perhaps to the Rothschilds. GAAP accounting rules are not met and deliberately not honoured."

MONEY created out of thin air at no cost the moment it is lent out is intentionally never entered in the banks bookkeeping. None of it is reported in any ledger that must show up on balance sheets, NADA. All is kept in silence, hence the real secret of money creation lays in not accounting for it.

When a mortgage is in arrears, not only is the property confiscated by the bank, but the repaid part of that loan plus the property are a total profit for the bank, while 'debtor' remains liable for its repayment.

This MASS swindle provides the Khazarians the power to buy and manipulate everything and everyone on earth, including governments."

So they practically MAKE IT UP to make it either look good, or bad, one for the public and the other for themselves, whether it's central, or local govt. We the people are the mugs.

Comment by Chris of the family Masters on July 15, 2019 at 3:07am
Looks like our trust accounts are those unaccounted billions. This cannot be explained to the masses for the obvious reason. It would be admitting to the monumental fraud, trading people on stock exchange.

"In other news, this happens everyday in the US and the (((MSM))) is totally silent about…"
52 minutes ago

Mr. Sizzle commented on stormtruther's blog post Watch Bill Gates Laughing While Saying ‘We Take GMO Organisms & Shoot Them Right Into Little Kids Veins’
"The Matthew 18: 6,7 quote is quite appropriate for what Bill Gates of Hell should face."
1 hour ago

Less Prone favorited Doc Vega's blog post How Disinformation has Been Used to Change our Modern Society We Were Warned a long Time Ago!
2 hours ago