“We Are The Death Merchant Of The World”: Ex-Bush Official Lawrence Wilkerson Condemns Military-Industrial Complex October 12 2018

“We Are The Death Merchant Of The World”: Ex-Bush Official Lawrence Wilkerson Condemns Military-Industrial Complex
October 12 2018 | From: Salon - http://www.wakeupkiwi.com/news-articles-61.shtml#Complex

The military-industrial complex "is much more pernicious than Eisenhower ever thought," says the retired US colonel.

Col. Lawrence Wilkerson is tired of “the corporate interests that we go abroad to slay monsters for.”

“I fault us Republicans for this majorly,” he confessed - although a good many prominent Democrats have also jumped on the neoliberal bandwagon.

In a 2011 speech, for instance, Secretary of State Hillary Clinton declared, “It’s time for the United States to start thinking of Iraq as a business opportunity” for U.S. corporations.

“In many respects it is now private interests that benefit most from our use of military force,” he continued.

“Whether it’s private security contractors, that are still all over Iraq or Afghanistan, or it’s the bigger-known defense contractors, like the number one in the world, Lockheed Martin.”

Journalist Antony Loewenstein detailed how the U.S. privatized its wars in Iraq and Afghanistan in another interview with Salon. There are an estimated 30,000 military contractors - https://foreignpolicy.com/2015/10/30/cashing-in-on-the-decision-to-... - working for the Pentagon in Afghanistan today; they outnumber - https://foreignpolicy.com/2015/05/29/the-new-unknown-soldiers-of-af... - U.S. troops three-to-one. Thousands more are in Iraq.

Lockheed Martin simply “plans to sell every aspect of missile defense that it can,” regardless of whether it is needed, Wilkerson said. And what is best to maximize corporate interest is by no means necessarily the same as what is best for average citizens.

“We dwarf the Russians or anyone else who sells weapons in the world,” the retired Army colonel continued.

“We are the death merchant of the world.” 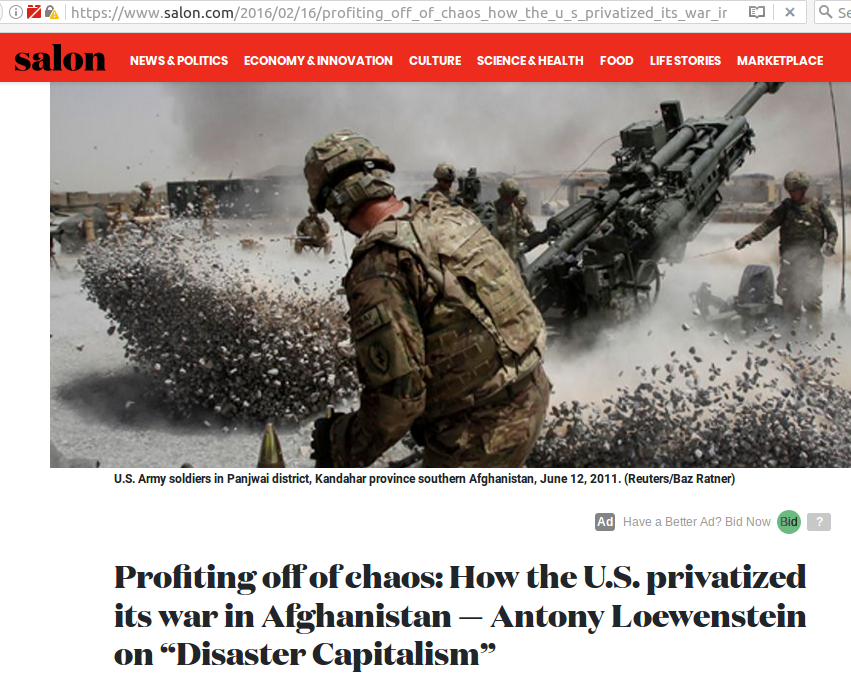 Never too late for us. Gee, it only took this General 15 years to figure out the blatantly obvious, or at least state it.

Bunch of traitors run the nation, you know what an Oath to the Constitution means to a military officer?  Apparently nothing.