Why Is Ernst And Young The Auditor At So Many Companies That Have R...

Reader note: Just a reminder with this Ernst and Young article to protect your 401K and stock portfolio from the massive corruption of the interlocking directorships that legal and financial auditors are not disclosing in the annual reports. You can sue them for your losses as it is a vast conspiracy to separate YOU from your investments. Learn more and get the action plan in the link below:

In Cat Report #538we explain how the scam works and gave you sample letters to write to your portfolio manager, the auditors, and attorneys who prepare the annual reports, etc. It will only take a few minutes to get this important “homework assignment” finished. Make it a priority today and put Ernst and Young on notice that patriots aren’t taking their bullshit anymore!

If there's one tie that binds some of the more recent and obvious implosions in capital markets - Luckin Coffee, Wirecard and NMC Health to name a few - is that Ernst & Young has been the auditor.

The big four accounting firm has "missed red flags or failed to aggressively pursue them" at many of these companies ahead of their scandals, according to a new write up by The Wall Street Journal.

Regulators are now taking a look at E&Y's work, the report claims, as a result.

E&Y has stood by its work and has attested that it has high standards. But it's tough to not want to try and notice that a trend is emerging with companies that are blowing up spectacularly. 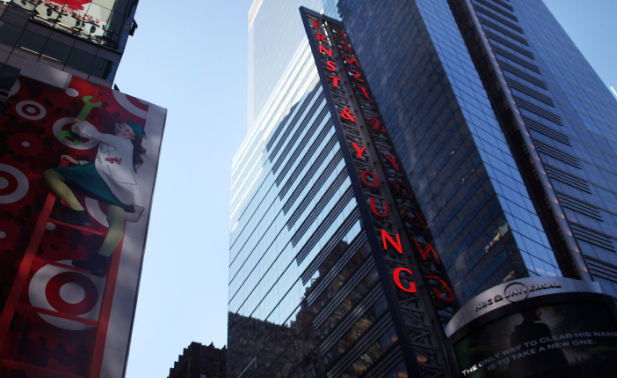 E&Y also said it had roles in uncovering the fraud at two companies. The company has advocated for auditors to play a larger role in detecting fraud at companies, which would shift the onus on an industry that has been quick to back away at that responsibility for  years.

E&Y has had "ties with executive and board members" at some of the troubled companies - including former E&Y partners sitting on companies' boards and audit committees.

The firm charges lower fees for audits than other big four firms, allowing them to take on more work. They also focus on younger, quick moving companies. For example, they prepared the audits for Google and Facebook, among others. It has a history of trying to attract companies that are looking to go public. 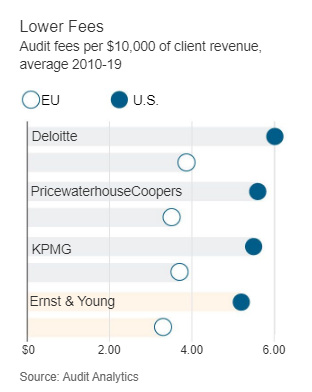 A former U.S. Securities and Exchange Commission chief accountant said that "EY prices its audits exceedingly competitively low to attract these companies with the hope that when they go public, they will make up for the initial discounts of audit fees."

The fees paid from companies can put pressure on auditing firms; both to offer low prices and to make sure that adequate resources are devoted to an audit. Many audit firms have started to take on consulting and tax work, in addition to audits, to help supplement their audit fees.

E&Y claims that auditing remains its "cornerstone" of its business. 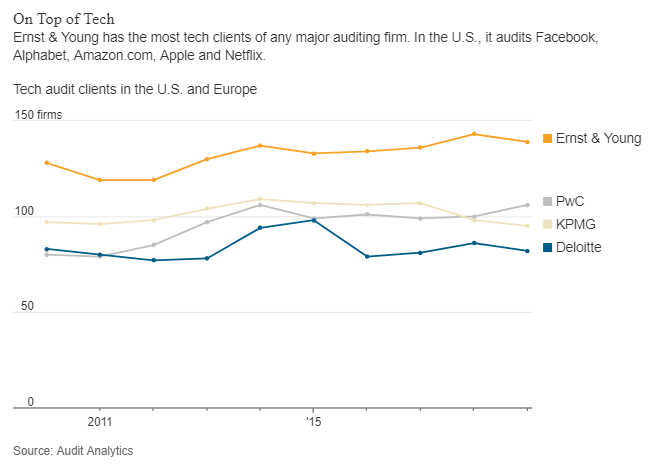 Wirecard is probably the most well known example of an E&Y client blowing up recently. The company was plagued by short seller allegations and whistleblowers for years and eventually collapsed when $2 billion it claimed to have had was found to simply not exist.

During E&Y's audit of Wirecard, they failed to notice that the entity supposedly holding the cash wasn't licensed to operate a trust business, as was claimed. The information was available on a Singapore government website. The owner of entity is now being charged with falsifying bank balances.

E&Y eventually caught on to the scheme after being helped along by KPMG, who was looking at the company's books at the company's request.  E&Y said they had been given "false bank confirmations" and statements for the account. 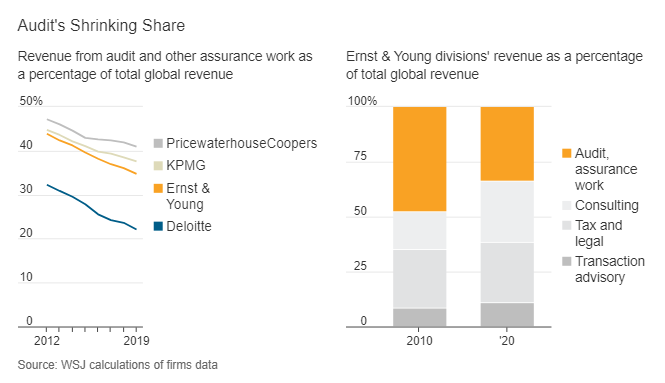 E&Y said: “It was ultimately the work of EY Germany that exposed a fraud expertly designed to circumvent all the checks and balances.”

Now the auditor faces both shareholder lawsuits and scrutiny from German regulators.

And outside of Germany, in the UK, the Financial Reporting Council has said that E&Y needs to be "more skeptical". The regulator told the company: “There should be more emphasis on challenge of management.”

E&Y has responded that they are doing just that: redesigning their audits with an air of skepticism.

E&Y was also the company that signed off on WeWork parent We Co.'s accounts before its plan to go public about a year ago. That IPO was rejected by the public market and the company's valuation crippled shortly after it announced its intent to go public. 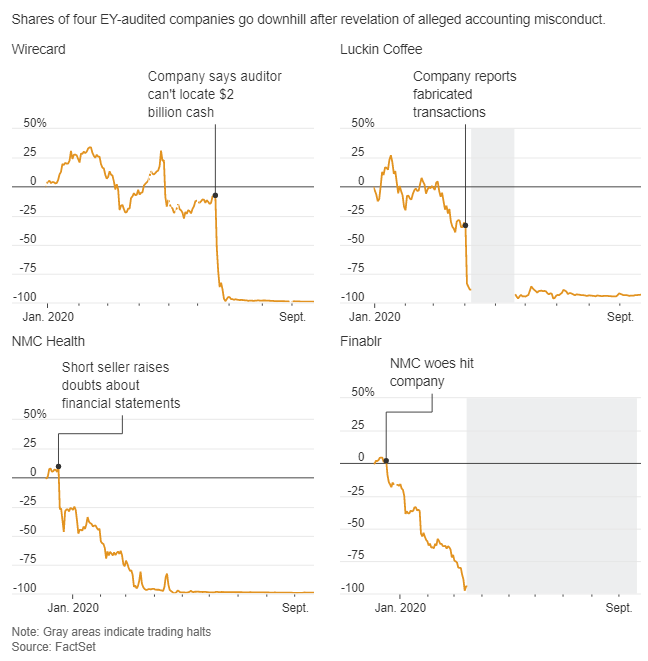 But it wasn't just Wirecard and WeWork that proved to be a mess for E&Y - they also helped Luckin Coffee go public in May 2019. The company raised money on public markets as recent as January 2020 and E&Y had issued a letter to the underwriters of the deal saying it had no issues with Luckin's finances.

But a month later, Muddy Waters Capital published a report about Luckin's sales, claiming they were overstated. E&Y assured the company's board there was no issue and Luckin issued a response accordingly.

Then, E&Y discovered that there were, in fact, issues. Co-founder and Chairman Charles Lu, after being informed of the fraud, transferred the equivalent of $160 million out of Luckin and into another of his public companies. 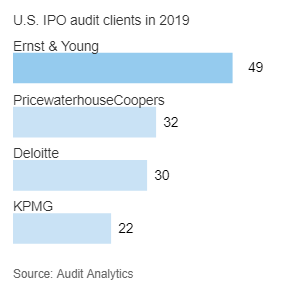 Finally, in April, E&Y admitted it found $300 million worth of fabricated revenue. The company faked the sales by selling "coffee vouchers" to large companies that were linked to founder Charles Lu.

E&Y claimed its "comfort letter" to the auditor wasn't the same as an audit. The firm ultimately tried to take credit for finding the fraud.

“It was EY China’s audit teams that discovered the underlying fraud,” the audit firm concluded.

"We are at war, but most of us are oblivious of it."
23 minutes ago

rlionhearted_3 commented on Chris of the family Masters's blog post That Mask is Giving you Lung Cancer
"Almost exactly the same as a Dr friend told me."
5 hours ago

Central Scrutinizer commented on Aaron's blog post WOW! Look at the repugnant New World Order meme on this new CORONA cover of TIME magazine!
"somebody's got too much time here...people will see into this bullshit what they want I…"
7 hours ago

Now it's out in the open:"Responding to the beheading of a school teacher by an Islamist in Paris,…See More
9 hours ago
0 Comments 0 Favorites