As Common Core champions like Jeb Bush, Bill Gates, and the U.S. Chamber of Commerce continue to attack parents, teachers, and taxpayers for what they claim are “myths” spread about the centralized standards initiative, many parents across the nation are not convinced.

They are refusing to subject their children to the stress, pressure, and confusion associated with the Common Core by opting out of the assessments aligned with the standards, or by withdrawing them from school and choosing homeschooling instead.

WHNT 19 News in Alabama reports a growing number of families making the decision to withdraw their children from school in order to homeschool because of “confusion,” “chaos,” and stress related to the Common Core standards.

“It [Common Core] has caused chaos in our house, and it’s not worth it,” said Lori Peden, who has withdrawn two of her children from McBride Elementary in Muscle Shoals, Alabama. “The teachers are not comfortable teaching it. They’re frustrated. Parents are upset, kids are not making good grades. That’s what I’ve seen.”

Peden said she never had plans to homeschool her children, but did so after she observed her son struggling with Common Core math assignments in which he was required to find and learn up to half a dozen different pathways to the same final answer, an endeavor that created confusion and constant stress.

“In math, they take a very long road to go a short distance,” said Peden. “You’re fighting over which method to use and how to figure out how he needs to do it. It’s a lot of time wasted, a lot of effort wasted.”

Megan King, a parent from Kansans Against Common Core, is also homeschooling two of her children because she is unhappy with the Common Core standards.

“My oldest is in middle school, and is on an advance track that I felt comfortable leaving him where he is at, but even with him I am seeing problems in the area of English,” King told Breitbart News.

King said she pulled her kids from public school as Common Core was being implemented.

“I noticed the dumb and confusing way math was beginning to be taught, and as I looked more and more into Common Core, I didn’t like what I was seeing on so many levels,” she explained. “My 4th grader had only read one literature book through the year. I asked his teacher about their reading and she said they had been reading small non fiction books (informational text).”

“I just felt my kids were not going to learn at a level I know they can and should be learning at,” King said.

Though homeschooling has been an adjustment for the entire family, King said the results have been worth it.

“I do recommend homeschooling,” she said. “It’s very rewarding, but I had to quit my job as a preschool teacher in order to homeschool, so we have had to really tighten our belt financially. But, even if a state finds its way out of Common Core, it will be years before things are what they were before No Child Left Behind and Common Core, so we, as parents, have to get creative and find new ways to educate our kids.”

Justin and Jennifer Dahlmann of Kansas also have decided to homeschool their children in response to the implementation of the Common Core standards.

KAKE.com reports that the Dahlmanns, who have four daughters from ages two to nine, said Common Core had been implemented at their children’s private school.

"Our own kids were taking these standards that are driving the curriculum and we didn't know anything about it," Justin said. "That's when we started doing the research on it and realized how overbearing it was."

The parents asserted that the Common Core standards are making education more confusing, as opposed to encouraging more rigorous critical thinking, as the standards’ supporters tout.

Homeschooling, for the Dahlmanns, is, in some ways, a form of protest of the “top down” Common Core standards.

“If this does nothing more than wake people up to becoming more involved with their children, that’s great,” Justin said. “But absolutely parents need to become more involved in this.”

William Estrada, Director of Federal Relations of the Home School Legal Defense Association (HSLDA) wrote in December of 2012, that he believes “children – whether homeschooled, private schooled, or public schooled – do best when parents are fully engaged.”

Estrada said that centralized education policies do not encourage parents to be engaged in what and how their children are being taught.

“The CCSS [Common Core State Standards] moves education standards from the purview of state and local control to being controlled by unaccountable education policy experts sitting in a board room far removed from the parents, students, and teachers who are most critical to a child’s educational success,” Estrada wrote.

Not just the Common Core - but especially the Nazi Vaccinations - would be enough for me to home school my children.  They are not getting "schooled" they are getting brainwashed and indoctrinated with the NWO Agenda 21 - just like Hitler's brown Shirt kids that turned in their own parents to the Nazis. 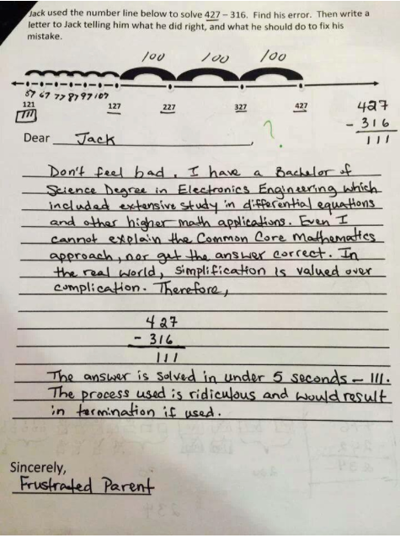 Sandy is now a member of 12160 Social Network
17 hours ago
Welcome Them!