[T]hose urging the city to halt the run believe that the thousands of Marathon volunteers could direct their efforts towards post-Sandy relief and cleanup, "and they also argue that the event will divert thousands of police from important hurricane-related duties." But despite petitions circulating, work started up again yesterday on the Marathon route.

A tipster, who wishes to remain anonymous, told us there were lots of workers in and out of the park today, who had "started before the storm and then came back starting yesterday." Trailers are lined up from around 71st to 66th Streets on Central Park West, a food truck was set up today, and "generators have been sitting there at least a week." The tents that were taken down prior to the storm have also been set back up, and there is a stage set up near 73rd Street.

Considering all the volunteer help and NYPD attention that's already being diverted to the Marathon, the added sight of generators and food being channeled to the event is probably going to strike some New Yorkers as a little misplaced—we're thinking of the ones who are currently lined up waiting for the National Guard to ration out MREs and bottles of water.

The residents of Staten Island are pleading for help from elected officials, begging for gasoline, food and clothing three days after Sandy slammed the New York City borough.

“We’re going to die! We’re going to freeze! We got 90-year-old people!” Donna Solli told visiting officials. “You don’t understand. You gotta get your trucks down here on the corner now. It’s been three days!”

Staten Island was one of the hardest-hit communities in New York City. More than 80,000 residents are still without power. Many are homeless, and at least 19 people died on Staten Island because of the storm.

Head on a pike

The mask comes off!

Why is the American flag pictured in behind the .... do I realy expect an answer?, no.

Is it the flag of New York City behind him? 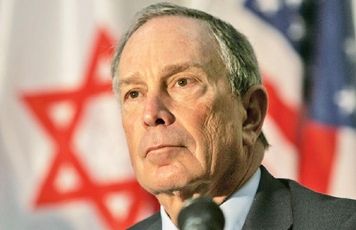 Makes me want to puke.

lol, great pic Suzie! You know what they say about little dogs having a syndrome where they can't help themselves but to yip, yap and attack all bigger dogs or predators. Me thinks that Bloomberg must suffer with the same kind of syndrome. It's either that or the little weenie (and not the dog) syndrome... if you know what I mean? ;)

Permalink Reply by Central Scrutinizer on November 3, 2012 at 8:06am

By ANDREW GROSSMAN and MATTHEW FUTTERMAN

Mayor Michael Bloomberg and organizers of New York City Marathon cancelled the race Friday amid growing concerns that holding the event would divert resources from cleanup efforts in the wake of superstorm Sandy. 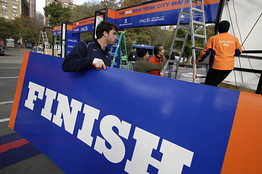 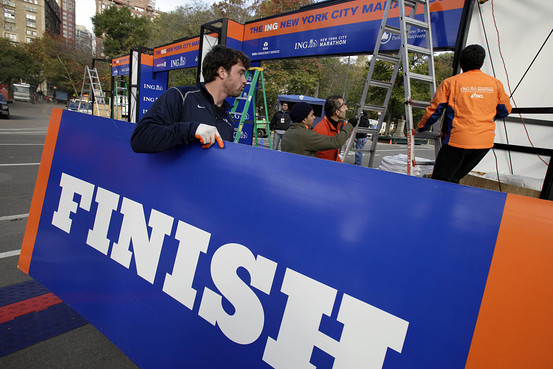 
Workers assemble the finish line for the New York City Marathon on Sunday.

Mr. Bloomberg had said as recently as early Friday afternoon that the marathon, scheduled to start Sunday morning, would go on and serve as a demonstration that the city was recovering from the storm and moving forward.

But other elected officials from around the city said holding it so soon after a major storm would be an insult to hard-hit residents still cleaning up and worried that it would get in the way of recovering from a storm that killed at least 41 people in New York City alone.

"We would not want a cloud to hang over the race or its participants, and so we have decided to cancel it," Mr. Bloomberg and the organizers said in a joint news release. "We cannot allow a controversy over an athletic event—even one as meaningful as this—to distract attention away from all the critically important work that is being done to recover from the storm and get our city back on track."

The city left more than a dozen generators desperately needed by cold and hungry New Yorkers who lost their homes to Hurricane Sandy still stranded in Central Park yesterday.

And that’s not all — stashed near the finish line of the canceled marathon were 20 heaters, tens of thousands of Mylar “space” blankets, jackets, 106 crates of apples and peanuts, at least 14 pallets of bottled water and 22 five-gallon jugs of water.

This while people who lost their homes in the Rockaways, Coney Island and Staten Island were freezing and going hungry.

Michael Murphy, of Staten Island, who had no power and no heat, said yesterday, “We needed 100 percent of the resources here.”

Chris of the family Masters posted blog posts
8 minutes ago

Something Is Missing In Buffalo Picture

tjdavis favorited Parrhesia's discussion Did You Know That A 2021 Report Predicted The Monkeypox Outbreak On May 15th 2022 ?
13 minutes ago

The Day The Martians Landed