Well, what are the odds?

A single positive PCR test for the virus isn’t going to cut it anymore.

For some reason, as of today, the organization decided that those tests for the virus we’ve been relentlessly assured are the gold standard for detecting infection are, in reality, just a mere “aid for diagnosis.”

Clinicians now, not only can, but “must” also consider a wide array of other factors, like “timing of sampling, specimen type, assay specifics, clinical observations, patient history, confirmed status of any contacts,” and even something called “epidemiological information”—whatever that exactly is—before diagnosing anyone with COVID-19.

WHO has also suddenly decided that, if you don’t show any symptoms, you’ll need to get a second test for confirmation as well. 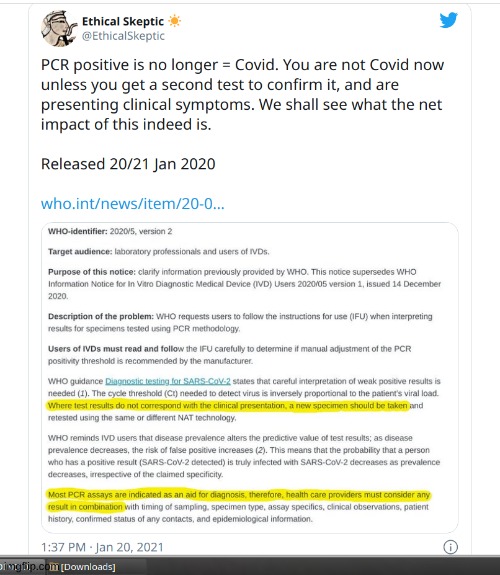 That’s a whole heck of a lot of extra hoops a person has to jump through to make the list of those officially infected or killed by COVID-19.

But, if you expect WHO to also recommend going back and massively decreasing the daily case and death counts used to terrorize us into submission for almost a year now by applying their new criteria retroactively, you’ve yet to understand that “following the science” has everything to do with following but nothing at all to do with science.

In fact, if you look closely, you’ll notice these new tighter guidelines—though released today—were actually all typed up and ready to go on January 13.

Wonder why they waited a week?

Whatever the reason, you may not be too surprised to learn that WHO is just returning to what used to be standard operating procedure.

Up until COVID hit in 2020, neither WHO nor the CDC had ever considered a single positive PCR test sufficient for diagnosing viral infection.

Indeed, as I reported in a recent column outlining how—contrary to the media’s attempts to convince you the Chicoms tried to cover-up the virus—China’s Communist Party rulers were, in reality, fomenting a panic in their ENGLISH language media before there could have possibly been any reason for concern:

One of the few comical episodes in this year-long Chicom-induced nightmare occurred when some conscientious staffer at WHO inserted a bracketed note saying WHO recommends testing people “only if“ they have symptoms in the transcript of a speech their boss Tedros gave that was entirely devoted to insisting that every nation in the world needed to immediately start testing people without symptoms.

Moreover, there are very good reasons why the loose COVID-19 diagnostic criteria in place right up until Joe Biden became president had, in the past, always been ruled out by both the CDC and WHO.

As my regular readers know all too well, the standard test for COVID-19 detects dead viral remains—not live infectious virus—which could wind up in your mucus or saliva in countless ways that have nothing to do with being infected.

As a result, it turns out that the way we’ve been administering PCR tests means they’ve been misdiagnosing infection virtually 100 percent of the time.

Even if PCR tests actually did detect infection, however, there’d still be a huge problem.

The small false-positive rate that any test is bound to have means that mass testing for COVID-19 together with taking a single positive test as sufficient for diagnosis—AKA, what we’ve been doing all along—is bound to create a fake pandemic even in the absence of any real one.

Suppose, for the sake of example, the virus didn’t even exist. Testing 10 million people would still result in 100,000 false-positives even if the rate were just a piddling one percent. 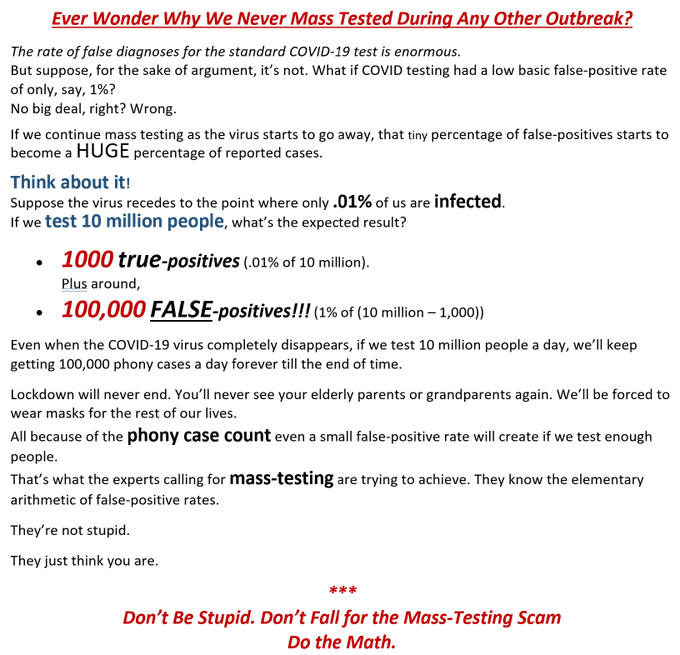 So, no matter how you slice it, the policies we’ve been following at WHO director-general, Tedros and Anthony Fauci‘s behest were guaranteed to create a phony pandemic from now till the end of time—as both of them had to know all too well.

And, of course, if we return to the policies we’ve always followed in the past, as WHO now recommends, COVID-19 case and death numbers will start precipitously dropping just as Joe Biden takes office.

Kenneth Alan Sharber replied to Twilight Zone's discussion BREAKING: Supreme Court Refuses to Review Pennsylvania Election Cases – Alito, Gorsuch and Thomas Dissent
"    I think a Sting operation is continuing. They are reading a bill out loud before they…"
22 minutes ago

When one learns of the CDC & Anthony Fauci's history of lies, damn lies & complete…See More
31 minutes ago
0 Comments 0 Favorites

"Nuclear winter or a natural cataclysmic event doesn't look that bad after all does it?"
40 minutes ago

Chris of the family Masters commented on Larry Flinchpaugh's blog post American Children Ten Times More Likely To Die From Suicide Than COVID
"Nobody dies from COVID. It does not exists...."
1 hour ago

Larry Flinchpaugh commented on Larry Flinchpaugh's blog post Wet your hands with clean, running water (warm or cold)
"I always thought it had to be hot water!"
1 hour ago

Guardian of Scotland commented on Chris of the family Masters's blog post What are the black flags at the US Capitol and why are there so many buses around the Congress?
"I do not know why those are up now everywhere but those are POW /MIA flags"
5 hours ago