2.0 Who Or What Is THE CROWN? By John Hardon Jewish Banishment And The "City" Of London 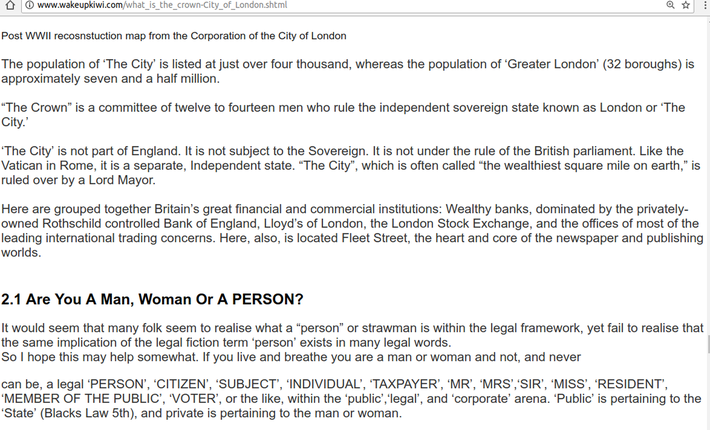 If in your thoughts, language or paperwork you classify yourself as any of the above, then you are firmly stuck in the matrix of the illusion.

Forget worrying about whether as a man or woman you fit into a classification status box with such legalese terms as, ‘natural person’ etc. But keep in mind that when dealing with any ‘public’ entity, you are dealing with legal, NOT ‘private’ lawful, and the definitions within the legal framework will always refer to artificial entities, a/k/a legal fictions.

A man or woman is commonly known within the layman law community as foreign (Black’s Law 5th Edition, “Foreign” - belonging or attached to another jurisdiction; non-resident person, corporation, executor) to the public (legal/political) and therefore in the public arena.

Theoretically in the legal system, a real sentient man or woman does not appear and cannot be seen in the public. This is why, when addressing a public entity on a private document, it is commonly practiced by the layman law folk, to refer to the private side first and then doing business as, i.e. Gordon Brown, d/b/a First Lord of the Treasury, and Prime Minister. Don’t refer to them as Mr Gordon Brown or Prime Minister Gordon Brown, as you would then be going straight to the public side (legal title and fiction). If you do, you cannot have a meeting of the minds and a private agreement with an artificial entity and legal fiction.

Please be aware that Mr, Mrs, Miss and Sir can all be considered legal appellations and therefore point straight towards a legal Title, which signifies legal ownership and therefore fiction. Folks can get very drawn into the name that appears on documents from a public entity, and some believe that if it isn’t in CAPITALS or doesn’t have Mr or Mrs, etc, preceding the name, then it must be directed at the man/woman. It is easier to be aware that any and all presentations coming from the public are always directed at the fiction and artificial entity – remember a man/woman cannot be seen by the public.

Some folk still consider themselves as a ‘Taxpayer’. Yet look on any Tax related paperwork and what name do you see? The legal fiction! And where does the paperwork originate? The public! So a taxpayer is a ‘Member of the Public’ and therefore an artificial entity and legal fiction – a man/woman is not a taxpayer.

A ‘Resident’ signifies an entity that is residing within something. For instance, the property you may be sitting in whilst reading this article will have a legal title and therefore the legal ownership will be within the UNITED KINGDOM (UK); mind you, ultimately, if you keep on going down the rabbit hole maybe even the Vatican appears?

Men and women are not part of or within the legal fiction, UK, and therefore a man or woman is not a resident of the UK, only an artificial entity and legal fiction can be a resident of the UK. So, do NOT use the term ‘Resident’ or ‘Residence’ (Blacks Law 5th Edition, Resident, any ‘person’ who occupies a dwelling within the ‘State.’) on any private documents. Always use c/o address, omit the postcode or place between four-corners, i.e. [SW1A 2TL], and state, ‘Non Domestic without the UK’ – being that you are a man or woman you cannot be part of the UK Corporation.

Even the term ‘Individual’ means artificial entity and legal fiction within the legal framework (Blacks Law 5th Edition, Individual, denotes a single ‘person’ as distinguished from a group or class). The legal system is written to facilitate commerce, fictions, the use of fraud and deception and to create division and elitism. So the legal system is not written for the protection of men or women, but the protection of commerce.

Therefore every legal defined term is theirs, so let them use their legal definitions on themselves. The easiest way to overturn all legalese presumptions and assumptions on your documents is to add the following statement: “All words herein are as John: Doe defines them.”

Legal and Lawful are not the same thing! Lawful is based on Common Law of the Land and is where you agree NOT to harm another living man/woman, damage property or cause fraud in contracts, whereas Legal is giving your consent to follow Company Policies known as Statutes and ACTS, which are not true laws and are based upon Admiralty Maritime Law of the Sea. This is by contracting with said Corporations by answering to the Strawman or Person's name.


2.2 Everything Is About Contracts Comment by Chris of the family Masters on February 25, 2021 at 12:32pm
Legal is about the commerce, lawful is about men and women.

Patrick C Conway favorited Phyllis Maka's blog post Family members are speaking up about the vax totally changing others in the family that got it. - Jim Stone
1 hour ago

Less Prone commented on Patrick C Conway's blog post What is going on with 12160?
"Doc Vega, There is plentiful propaganda about Germany from the beginning of the last century until…"
5 hours ago

cheeki kea commented on Phyllis Maka's blog post Family members are speaking up about the vax totally changing others in the family that got it. - Jim Stone
"I think for the vaxxed up there's a sense of sacrifice on their part and that very action in…"
5 hours ago

"All bachelors, wake up. There's a rich widow in England, if only you can stand her guts for a…"
5 hours ago

Central Scrutinizer favorited Patrick C Conway's blog post What is going on with 12160?
5 hours ago

Central Scrutinizer commented on Patrick C Conway's blog post What is going on with 12160?
"'...any Publicity is good Publicity...and Free!" ~C. Beatty tried to contact the…"
5 hours ago

Less Prone commented on Larry Flinchpaugh's blog post Stimulus Checks Forever? One Lawmaker Wants $2,000 Checks Every Month.
"Importing the problems of the developing countries does not solve the original situation it only…"
5 hours ago