What really happened on 9/11?  Foreign terrorists and hijackers didn’t attack the US on September 11, 2001 and bring down the World Trade Center Towers – the U.S. government did that, using controlled impact of unmanned aerial vehicles (UAV) and planted tactical nukes.  The story of the century isn’t about the hijackings of US commercial airlines, it is about the US government using thermal nuclear bombs against another civilian city, for the third and fourth time. This time the 2 nuclear bombings were treasonous – against the US people and on US soil. U. S. President Harry S. Truman authorized the US Military to use two atomic bombs against the Japanese civilian cities of Hiroshima, August 6, 1945 and Nagasaki August 9, 1945. U.S. President George W Bush authorized the US CIA to detonate two atomic bombs (thermal nuclear devices) in New York City on September, 11, 2001.

It is this disclosure that forced Dick Cheney to go public to distract the public from the irrefutable evidence of nuclear detonations and say he ordered Flight 93 shot down. https://www.youtube.com/watch?v=QC1QAR5gQrc

The US government of George W Bush and Dick Cheney used controlled impacts of US military Boeing aircraft and thermal nuclear devices on US soil, against US civilians, on 9/11. The US government killed thousands on September 11, 2001. They are the ones who attacked the US and the US people. They are the ones who brought down the World Trade Center Towers. bin Laden, Islamic extremists, al Qaeda, the Taliban, and Saddam Hussein had nothing to do with 9/11. George W Bush and Dick Cheney planned it, ordered it, executed it and killed US civilians, on US soil, on September 11, 2001.

At the bombs hypocenter or ground zero of a thermonuclear explosion a temperature is generated of 500 million degrees Fahrenheit. Everything vaporizes instantly at the center of one of these blasts. Underground nuclear detonations of low depth produces a mushroom cloud and a base surge ( a base surge is a cloud which rolls out from the bottom of the column produced by a subsurface burst of a nuclear weapon.), both seen here in the above photo taken on September 11, 2001.

One the greatest tragedies resulting from the Sept 11, 2001 attack on the WTC towers in New York City is the plight of the heroic rescue workers who saved thousands of lives on that day. A study published in April of 2010 found that about 20% of the 14,000 responders have permanent lung damage. A large number of those 9/11 first responders has contracted blood cancers at an unusually young age, and top doctors suspect the disease was triggered by an unprecedented “synergistic mix” of toxins at the World Trade Center site. These growth of these cancers among Ground Zero workers, and others, are consistent with exposure to radiation contamination.

The WTC Medical Monitoring Program is now studying a group of Ground Zero workers, including cops, construction workers and volunteers, suffering from cancers such as leukemia, lymphoma and multiple myeloma. The blame has been placed on the ‘toxic dust’ clouds which engulfed the area surrounding the towers. While there is little question that particulate matter such as pulverized concrete impacted the health of those who were standing in the blast radius of the falling towers, the huge number of responders who contracted illnesses including rare cancer types is more akin to those who survived the nuclear bomb detonations in Nagasaki and Hiroshima Japan.

How does this comparison make any sense? The 9/11 Commission Report officially stated that the city of New York was hit with planes, not a nuclear missile. As it turns out there is a dirty little secret omitted from the 9/11 Commission Report. The World Trade Center Towers were brought down by explosions containing a large quantity of uranium – from underground nuclear detonations. Experts have always said that the towers were intentionally collapsed by controlled demolitions. Structural engineers from around the World have said that it is impossible to cause a collapse of a skyscraper from a fire caused by an aircraft impact. There have been several major high rise fires throughout the World before 9/11 and since then and none have caused a collapse of the structure. The engineers have even used the Empire State building catastrophe as proof of their claim.

On the foggy morning of Saturday, July 28, 1945, a U.S. Army B-25 bomber smashed into the north side of the Empire State Building. The majority of the plane hit the 79th floor, creating a hole in the building eighteen feet wide and twenty feet high. The plane’s high-octane fuel exploded, hurtling flames down the side of the building and inside through hallways and stairwells all the way down to the 75th floor. The plane exploded within the building. One of the engines and part of the landing gear hurtled across the 79th floor, through wall partitions and two fire walls, and out the south wall’s windows to fall onto a twelve-story building across 33rd Street. The other engine flew into an elevator shaft and landed on an elevator car. Some debris from the crash fell to the streets below, sending pedestrians scurrying for cover, but most fell onto the buildings setbacks at the fifth floor. Still, a bulk of the wreckage remained stuck in the side of the building. After the flames were extinguished and the remains of the victims removed, the rest of the wreckage was removed through the building. The plane crash killed 14 people (11 office workers and the three crewmen) plus injured 26 others. Even though the B-25 bomber had impacted the building at a high rate of speed and the high octane fuel exploded and inflamed 3 floors of the inside of the building the structural integrity of the Empire State Building was not affected.

More recently, on Feb. 12, 2005 in Madrid, the Windsor Tower burned for over 20 hours, which led to a fire stronger and hotter than that in the WTC, but even the collapses of the Windsor Tower caused by the very strong and long-enduring fire were minimal and limited to the upper floors.

These known facts explains a great number of anomalies present in the analysis of how the World Trade Center Towers fell. One of the common questions that has puzzled many independent observers was how jet fuel, which burns in open air at about 300 deg C, was able to compromise the integrity of steel, which melts at 1,000 deg C. The presence of depleted uranium at Ground Zero settles this conundrum.

According to Rudy Giuliani, the mayor of New York City on September 11, 2001, the fires raged at ground zero ‘for a hundred days’ after the towers were hit. The presence of a high-energy compound such as uranium helps explain how this was sustained long after the jet fuel would have been gone and how the health of so many 9/11 first responders was devastated.

On August 29, 1949, the USSR detonated its first nuclear fission bomb, dubbed “Joe-1” by the U.S. It produced the same type of mushroom cloud and a base surge as witnessed by billions of people around the World on the morning of September 11, 2001. Storax Sedan was a shallow underground nuclear test conducted in Area 10 of Yucca Flat at the Nevada National Security Site on July 6, 1962 as part of Operation Plowshare, a program to investigate the use of nuclear weapons for mining, cratering, and other civilia.... The 100 kiloton Sedan nuclear bomb was buried at a depth of 635 feet. The detonation produced a mushroom cloud and base surge – typical of shallow-buried nuclear explosions. The cloud is highly contaminated with radioactive dust particles and produces an intense local fallout.

Experts, both military and civil engineers, have concluded that the only plausible explanation for what happened to the World Trade Center Towers on September 11, 2001 is that small underground nuclear detonations were involved in the collapse of the WTC towers. The over ten million degrees of heat created by a thermonuclear detonation sublimated all water within the concrete of the structure in a moment. Water explodes extremely quickly into 24-fold volume and totally pulverizes the concrete. Burning radiation is absorbed in steel so quickly that steel heats up immediately over its melting point 1585 °C (approx. 2890 °F) and above its boiling point around 3000 C (approx. 5430 °F). Super hot groups of steel pillars and columns, torn from wall by pressure wave, are sublimated. They immediately turn into a vaporized form, binding heat as quickly as possible. Vertical bursts are not possible for a gravitational collapse or for cutting charges which are used horizontally but on the morning of September 11, 2001 we saw exactly that – a nuclear detonation.

Concrete evidence of nuclear detonations at WTC on 9/11

Many have wondered what caused the steel beams of the World Trade Center Towers to instantly disintegrate? Instantaneous rusting effect of a nuclear detonation explains this. Add the amount of heat generated by a nuclear detonation and you have an instantaneous vaporization of all material (steel beams, concrete, glass, sheet metal, desks, phones, computers, papers and people) within the epicentre of the blast (ground zero). Cast iron melts at approximately 1,375 °C (2,507 °F). It’s boiling point is about 2862 °C (5182 °F). The heat inside a nuclear explosion can reach millions of degrees Fahrenheit – between 50 and 150 million degrees Fahrenheit. The U.S. Army Corps of Engineers (seen above walking past burned out vehicles) were immediately on scene in a supporting response and recovery role in New York City following the thermal nuclear attacks. 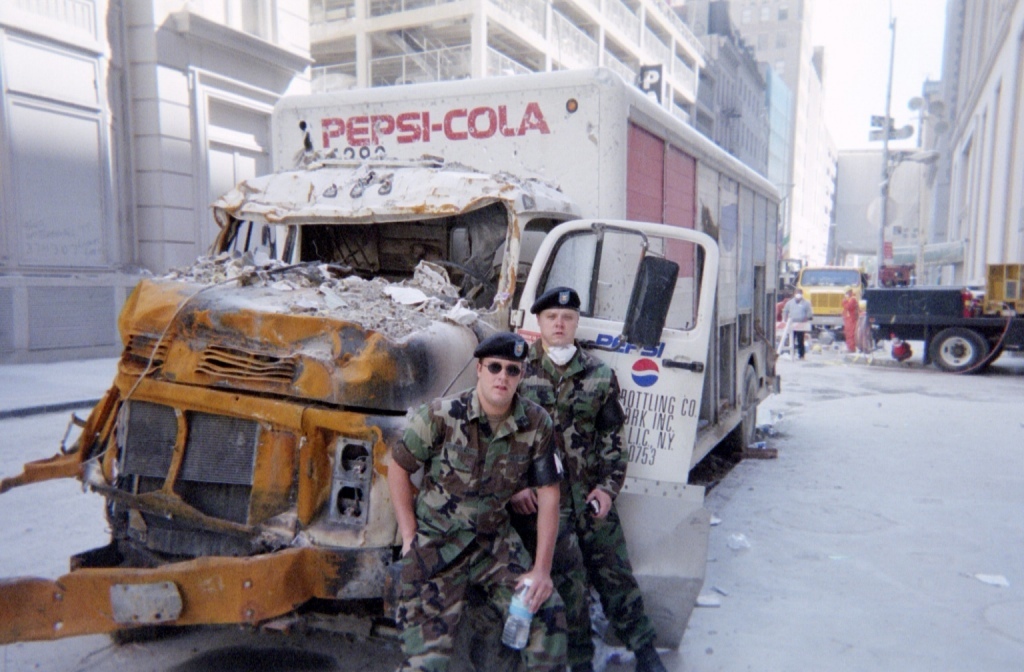 The intense flash heat generated by the nuclear detonations caused vehicles around ground zero to ignite. The WTC fires were all on the floors high above ground yet everywhere around ground zero, vehicles were photographed burned out. The heat was so intense that rubber tires evaporated. Notice that the fire truck wasn’t hit by debris from the nuclear excavation of the WTC Towers. It was parked beside a building that is still standing. Windows in the building have not been blown out. The front tires are completely gone while the rear tires remain. Dust could not melt the tires. A nuclear detonation heat and shockwave does this type of damage. Phyllis Maka commented on Phyllis Maka's blog post “Nobody can force anybody to take the vaccine,” Bolsonaro adding “We’re dealing with lives, where is our freedom?” [IT'S BEING HIJACKED BY NO GOOD BEINGS]
"Anything coming from Them not meant to be beneficial to us, only to Them."
41 minutes ago

cheeki kea commented on Phyllis Maka's blog post “Nobody can force anybody to take the vaccine,” Bolsonaro adding “We’re dealing with lives, where is our freedom?” [IT'S BEING HIJACKED BY NO GOOD BEINGS]
"And meanwhile here we read about (pro vaccine) GPs squabbling for the scraps ( leftovers that are…"
54 minutes ago

Phyllis Maka commented on Phyllis Maka's blog post “Nobody can force anybody to take the vaccine,” Bolsonaro adding “We’re dealing with lives, where is our freedom?” [IT'S BEING HIJACKED BY NO GOOD BEINGS]
"Good on him, we need more like him."
57 minutes ago