Senator Rand Paul: Leave control of elections up to the states 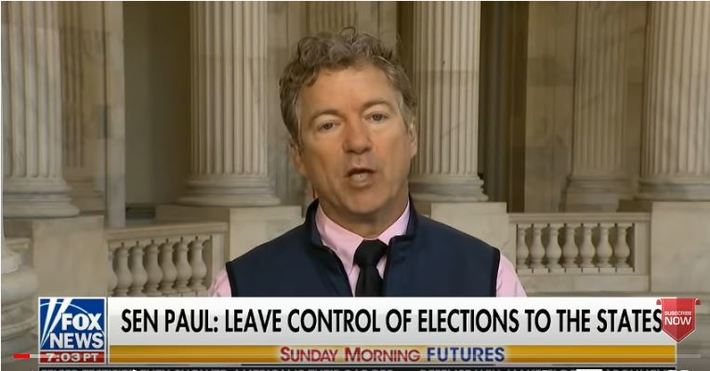 The Associated Press news article in the News Press, along with the majority of the mainstream press, inaccurately claims that there is no evidence of voter fraud.

Actually there are many examples of likely fraud.

Consider this:
• Meaningful access to vote tabulation was denied.
• Votes were accepted after the dead line.
• Counties with more votes than registered voters.
• Some State legislators in swing states were not allowed by law, to select the electors.
• Dominion voting machines likely hacked.
• Undocumented aliens voted.
• Evidence of hundreds of thousands of ballots appearing out of thin air.

Biden is using the fake claims of no voter fraud and Capitol riots which were inaccurately blamed on Trump, as an excuse to criminalize dissent and ban conservative voices from social media sites. Additionally, he plans to use bill HR 1 to take control of the election process making it virtually impossible for the Republicans to ever regain a congressional majority or control of the White House.

Congress can’t force the states to change their voting laws, but can restrict federal money for state projects to those states who do not comply with HR 1.

It will take both patriotic Republicans and Democrats to halt this assault if we are to return to a Constitutional Republic including the Rule of Law.

Central Scrutinizer commented on KLC's group MUSICWARS
"no probs Burps..... "Now back to our regularly scheduled programming...." Next Up?, four…"
2 hours ago

Central Scrutinizer left a comment for Voco Veritas
"About time ya got here VV....sheeesh, We've been waiting for ya ;) Greetn'z &…"
3 hours ago

Central Scrutinizer left a comment for Jane Bower
"About time ya got here JB....sheeesh, We've been waiting for ya ;) Greetn'z &…"
3 hours ago

Central Scrutinizer left a comment for Zulugroove
"About time ya got here Groovy Zulu...sheeesh, We've been waiting for ya ;) Greetn'z &…"
3 hours ago

cheeki kea left a comment for Zulugroove
"Greetings Zulugroove, That's a great name and it's really groovy to have you here at the…"
4 hours ago

cheeki kea left a comment for Jane Bower
"Greetings Jane, Awesome that you have joined up at this site today. "
4 hours ago

cheeki kea left a comment for Voco Veritas
"Greetings to you Voco, So great that you've joined us all here at the site."
4 hours ago

Less Prone commented on Doc Vega's blog post America Already at War With China (Just not Declared)
"We, nations, people and individuals are being played. We live in a world of deception, lies and…"
7 hours ago

First they have to really go after guns…funny I use to agree with this.Next they will say the…See More
7 hours ago
1 Comment 0 Favorites

Larry Flinchpaugh left a comment for Otto Sontheimer
"I haven't seen you on 12160 yet?"
14 hours ago

Larry Flinchpaugh left a comment for mark flinchpaugh
"I haven't seen you on 12160 yet?"
14 hours ago