The NAZI EU Vatican- Facebook Zuckerberg's Boss [SNIPPET- from presscore.ca - I know your suffering and your poverty - though you are rich]

On June 3, 1997, Bergoglio was appointed Coadjutor Archbishop of Buenos Aires with right of automatic succession. On 28 February 1998, Bergoglio became Metropolitan Archbishop of Buenos Aires. In that role, Bergoglio created new parishes which required more priests and a lot more money being required paid by the state to the Catholic Church. One of Bergoglio’s major financial initiatives as archbishop was to increase the Catholic Church’s presence in the slums of Buenos Aires. Not to care for the poor, but to profit. Under his direction, the number of priests assigned to work (with pay by the state) in the slums doubled. 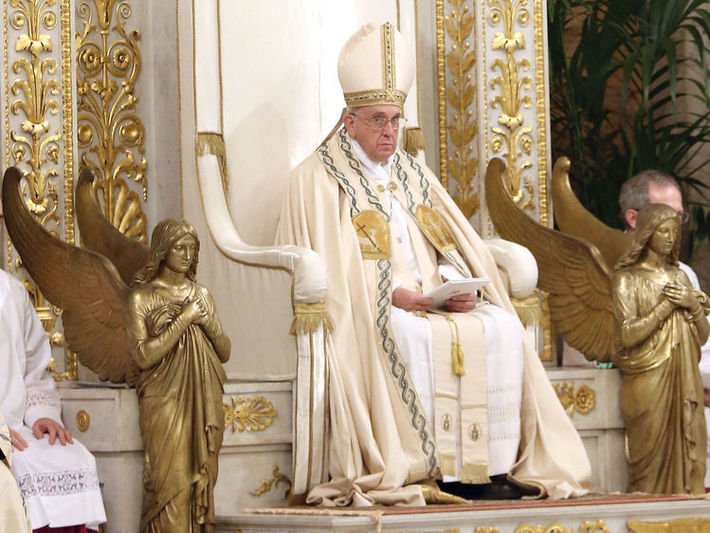 Also early in his time as Archbishop of Buenos Aires, Bergoglio sold off the Archdiocese’s shares in multiple Argentina banks and laundered the funds and investments into those of private accounts in international banks and to the IOR (Institute for the Works of Religion), commonly known as the Vatican Bank. As a result, Bergoglio robbed multiple Argentine government controlled banks and forced all of the Argentinian archdioceses into near bankruptcy. The Federal Reserve did the same thing in the United States, at the very same time as Bergoglio was robbing the Argentine banks.

Soon after becoming de facto Pope (and the Crown) he had the Bank of Canada (a Crown Corporation) Governor sell off all of Canada’s gold reserves and transferred all deposits to the Bank for International Settlements (BIS). http://www.fin.gc.ca/n16/16-107-eng.asp

Pope Benedict resigned, not because of bad health or because of Catholic clergy (including bishops and cardinals) child molestation and male prostitution scandals, he resigned because the stolen and laundered money from the U.S. and European Debt Crisis financial fraud schemes were traced to him – the Crown.

I know thy works, and tribulation, and poverty, (but thou art rich) and I know the blasphemy of them which say they are Jews, and are not, but are the synagogue of Satan

"wAIT....wha???.... how refreshing... and here I thought all human logic circuits, rational thinking…"
4 hours ago

"I got Slapped Upside the Head for sharing your post!"
8 hours ago

Guardian of Scotland commented on Aaron's blog post Unmasking The Mask Hoax – Bow Down Anyhow… Submit To All Unlawful Authority Or Else!
"I do not trust anything the CDC has to say about anything. I would like to see exactly where on the…"
11 hours ago

Phyllis Maka commented on Phyllis Maka's blog post If Trump wins and the Democrats steal the Senate in 2020? the House will impeach and the Senate will convict
"We are here now being awakened to do the job of clearing out this 'muckety muck of all…"
12 hours ago

Chris of the family Masters favorited Phyllis Maka's blog post If Trump wins and the Democrats steal the Senate in 2020? the House will impeach and the Senate will convict
15 hours ago

cheeki kea commented on Phyllis Maka's blog post If Trump wins and the Democrats steal the Senate in 2020? the House will impeach and the Senate will convict
"All this will come to light sooner or later, and that's when we will see the parents blamed, -…"
16 hours ago

cheeki kea favorited Phyllis Maka's blog post If Trump wins and the Democrats steal the Senate in 2020? the House will impeach and the Senate will convict
19 hours ago