THEY ARE LOSING THEIR CONTROL OF THE PEOPLE THE MASS SWINDLE DOES NOT WORK ANYMORE !

Legal “persons” have no gender

Legal “persons” have no race

In legal-land, “PERSONS” AREN’T REAL – THEY ARE FICTIONAL

[NO WONDER WE SEE YOU GOING ALL STUPID, JUST DON'T DRAG US REEEAAAL FLESH AND BLOOD HUMANS INTO YOUR STUPID ACTS]

When the UNITED STATES went bankrupt in the 30s because of the banksters orchestrated “great depression”, so-called “federal” government representatives pledged (hypothecated) the future earnings and productivity of the American people to the banksters as payment of the debt.

1. To pledge (property) as security or collateral without delivery of title or possession.

Franklin Delano Roosevelt (FDR) was put in office in 1933 to administer this new system of government/economics. It was called The New Deal and sold both to Congress and the American people as an emergency solution to a national economic nightmare.

The state of emergency declared at the time has been maintained ever since.

The creation of the US Dollar / FEDERAL RESERVE NOTE actually brought in Rothschild’s New World Order and it was displayed on the one dollar bill in 1935 for all to see:

The motto inscribed beneath the pyramid in the Great Seal of America is “Novus Ordo Seclorum” which is Latin for “New Order of the Ages”, and synonymous with the “New World Order”. 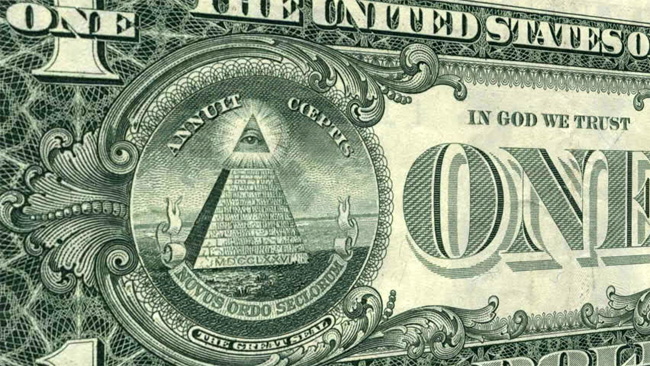 The accomplished researcher David Wilcock actually disputes this translation of Novus Ordo Seclorum: “This passage is indeed quite revealing. What we learn is that "Novus Ordo Seclorum" does not mean "New World Order" as many conspiracy theorists would claim, but actually "A mighty order of ages is born anew."

We need to remind ourselves that the FEDERAL RESERVE NOTE (the US Dollar) is the currency of the private Federal Reserve banking cartel - not the currency of a sovereign nation.

The hypothecated population’s earnings had to be tracked and taxed, so UNITED STATES citizens were encouraged to sign up for ‘federal’ Social Insurance aka Social Security. Not coincidentally the Social Security Act was also passed in 1935. [Today it is almost impossible to work, open a bank account, or make a doctor’s appointment without presenting a Soc Sec number.]

This is all true! Learned about it in the mid 1990s when I tried ti educate people about it then they called me an extremist! I thank people like Norman Dodd and Edward G. Griffin for their incredible work. Men like this are the true patriots who will go largely unnoticed!

That amount I'd take in cash. Big "tr" would be hard to produce...

hmm... that promissory note is such a tiny amount in their world of "plucking money out of thin air" why not go the whole hog, put a big fat Tr at the beginning of -illion and upset their cart, after all their world is just an artificial world of no substance.

And when we at it, How about I'll give you a promissory note for $5 million. You'll deposit it as the banks asset and bring me back $4.5 million. Keep $500,000 as a payment for your trouble.

Yeah commercially sensitive information he says, ha they certainly do have something to hide. They (all central & commercial banks) don't keep accounts of the "pretend" loans, the necessary funds that people are led to believe they have, they don't have the monies in the banks to give out in the first place. So in actual fact they are being deceitful and fraudulent, under the Fair Tradings Act that would be a crime.

My local bank wanted their leaflets put on our notice boards at work. Advertising for home loans, services and contributions to staff kiwisaver with the usual... normal lending criteria applies etc, etc and "our friendly staff will be happy to advise and answer Any questions" So I took a brochure to a bank and asked them straight out " Do you engage in Rehypothecation ? -the teller was confused and scarped off to get a team leader, who then rushed off to get the manager, who then motioned me into his office stating..." I-I- um can't answer that question, -it's commercially sensitive information. "So' I said "You are Not willing to answer Any question and therefore I believe you have something to hide, and are in fact No better than any other bank, yet you claim you are." That really got the poor man who then replied - "But we are better -and well-um -ah, off the record that answer is yes and no. We don't sell them, but we buy them." After stunning him into submittance I then concluded They were Half as good as they claimed, and to show good faith I would put out half the leaflets for the staff to read and return the surplus, and I did. We Need to put these banks In Their Place !

Patrick C Conway favorited Phyllis Maka's blog post Family members are speaking up about the vax totally changing others in the family that got it. - Jim Stone
6 minutes ago

cheeki kea commented on cheeki kea's blog post SAY THE DAMN PRONOUNS !!
"If there's one collective person who can serve up an insult like no other it is Of Cause the…"
2 hours ago

Phyllis Maka commented on Phyllis Maka's blog post Family members are speaking up about the vax totally changing others in the family that got it. - Jim Stone
"My hubby got vaccinated twice the free flu shot you get it once a year. He dropped dead at his job…"
3 hours ago

Central Scrutinizer commented on Patrick C Conway's blog post What is going on with 12160?
"'...any Publicity is good Publicity...and Free!" ~C. Beatty tried to contact the…"
4 hours ago

Less Prone commented on Larry Flinchpaugh's blog post Stimulus Checks Forever? One Lawmaker Wants $2,000 Checks Every Month.
"Importing the problems of the developing countries does not solve the original situation it only…"
4 hours ago