(See updates at bottom of the page)

Lots of speculation on the Net today regarding the recent announcement by the Trump campaign legal team about Sidney Powell not being a member of Trump's legal team.

From appearances it does seem like there has been a division of some kind. 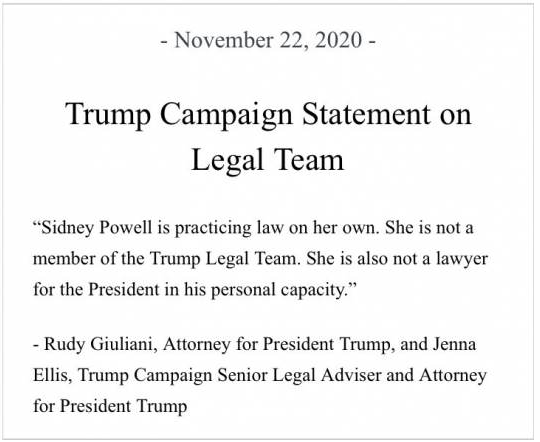 Today's statement appears to contradict a statement made on Thursday by Rudy Giuliani.

Then there was this tweet that has been circulating as well today attempting to explain this away.

A little confusing although it seems to make a lot of sense.

I am not a lawyer but it seems to me with Sidney Powell, Lin Wood, Joe DiGenova and others working independently it potentially allows for them to pursue legal remedies without any bias and that they could continue to pursue legal actions beyond the limits, scope and time restraints related to President Trump's  campaign legal challenges. This would allow them to fight on beyond any deadline.

We are due for some major news regarding various legal actions being sought by both Trump's legal team and the independent team headed up by Powell and Wood as early as tomorrow.

Other related stories circulating on the net:

"JUST IN: Trump Campaign Distances Itself From Sidney Powell"

“KRAKEN” is a CIA Hacking Program

"Events happened with head-spinning speed. On Thursday, Trump’s legal team held a press conference. Rudy Giuliani talked about traditional voter fraud (cemetery voters, faked ballots, etc.); Sidney Powell talked about corrupt, or corruptible, election software, a familiar topic to the State of Texas NPR, and MSNBC; and Jenna Ellison reminded the press that the conference was not an evidentiary hearing but was, instead, an opening statement.

For over a week, Powell has been making the media rounds, asserting that the system used in several states -- Dominion Software, running on Smartmatic machines – originated in Venezuela when Hugo Chavez wanted a system that could cleanly swing elections his way. She spoke about votes being counted abroad, software changes, and vote manipulation over the internet.

While her numbers were breathtaking (Trump “had at least 80 million votes”), Powell’s stated facts tracked available information: Smartmatic came out of Venezuela; in 2007, Smartmatic announced that it was selling its Sequoia Voting Systems to Dominion; the chairman of Smartmatic’s board is a George Soros crony; the system is easily hackable; Georgia’s system was vulnerable; and the data coming out of the swing states shows anomalies that cannot occur naturally. (You can see all the known evidence here.) These facts made Powell’s contentions sound credible."

I agree with the campaign's statement that I am not part of the campaign's legal team. I never signed a retainer agreement or sent the President or the campaign a bill for my expenses or fees.

My intent has always been to expose all the fraud I could find and let the chips fall where they may--whether it be upon Republicans or Democrats.

The evidence I'm compiling is overwhelming that this software tool was used to shift millions of votes from President Trump and other Republican candidates to Biden and other Democrat candidates.  We are proceeding to prepare our lawsuit and plan to file it this week.  It will be epic.

We will not allow this great Republic to be stolen by communists from without and within or our votes altered or manipulated by foreign actors in Hong Kong, Iran, Venezuela, or Serbia, for example, who have neither regard for human life nor the people who are the engine of this exceptional country.

#WeThePeople elected Donald Trump and other Republican candidates to restore the vision of America as a place of life, liberty and the pursuit of happiness.
You may assist this effort by making a non tax-deductible contribution to www.DefendingTheRepublic.org. ; #KrakenOnSteroids"

This observer is starting to wonder if Sidney Powell has uncovered something ie. through voting machine fraud via the US security apparatus that even the Trump Campaign legal team does not want to expose(a breach of National Security laws) . That might explain why Rudy Giuliani is concentrating on the illegal ballots aspect and not voting machine rigging.

Another curious point is the fact that Venezuela's Chavez and Moduro used the same software to steal their country's elections. You have to wonder where the software originated or was really developed and if the CIA provided Venezuela with the technology through a third party. If proven to be true that fact opens up a real can of worms. Why would the CIA help the Socialist regime in Venezuela? Former CIA Angola task force head John Stockwell wrote a book titled "In Search of Enemies" about how the CIA created their own bogey men to justify their interventions.

In solidarity with all good people

It seems NING does not like Twitter Embeded links at this moment so I have just linked the related tweets by url.

"Black Activist Arrested For A Role In U.S. Capitol Terrorist Attack"
2 hours ago

John Sullivan, a liberal activist, has been arrested for his alleged role in the U.S. Capitol…
2 hours ago
0 Comments 0 Favorites

Less Prone favorited Central Scrutinizer's blog post CNN-NPR Photo-Journalist Jade Sacker was Embedded with Antifa Leader John Sullivan During Siege of US Capitol – Cheered “We Did It!” After Inciting Riot
2 hours ago

Less Prone left a comment for MAC
3 hours ago

cheeki kea replied to Twilight Zone's discussion McCabe Says Trump’s Message Demanding Peace and Denouncing Violence is Actually “Coded Language” and a “Dog Whistle” to His Base to Fight
"He's a low down Fired employee with a big bee in his bonnet. Judge said "…"
9 hours ago

cheeki kea commented on Chris of the family Masters's status
"I'll try it from this end Chris and see if it works, have to think of something interesting to…"
13 hours ago

Twilight Zone commented on Aaron's blog post Breaking Nancy is Now Playing “Commander in Chief” By Addressing The Troops…and It Totally Backfired
"Marine Corps. Rebukes Pelosi: “WE DON’T WORK FOR YOU!” By…"
15 hours ago