(Support Free Thought) - The Governor’s Highway Safety Association calls itself “The States Voice on Highway Safety” and holds annual training meetings to indoctrinate law enforcement agencies all across the country. However, the GHSA should genuinely call itself “The Alcohol Industry’s Voice,” as its latest report is entirely funded by the alcohol industry in a blatant attempt to paint cannabis users as the real highway villains.

GHSA’s report was funded completely by the Foundation for Advancing Alcohol Responsibly (www.responsibility.org) and is titled “Drug-Impaired Driving: Marijuana and Opioids Raise Critical Issues for States.” The report was quickly broadcast across mainstream media outlets who are also largely funded by the alcohol industry’s advertisements. Curiously absent from the media coverage though was the fact the report was entirely paid for by Responsibility.org. 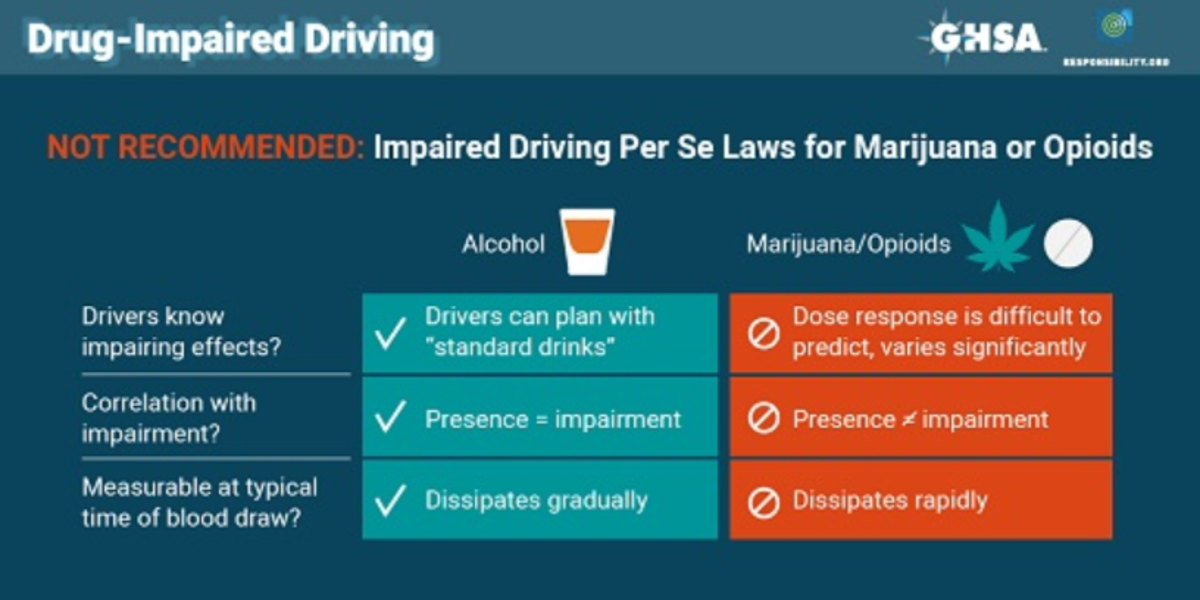 GHSA’s report pins the blame for impaired driving deaths on cannabis and opioids. Listed in the report are a number of disturbing encouragements to law enforcement agencies:

Nearly all of the “recommendations,” if implemented, will lead to increased mass incarceration of the U.S. populace, which already has the largest prison population in the world. The recommendations could lead to more completely innocent and unimpaired drivers being jailed by, as The Free Thought Project has reported on numerous occasions, so-called Drug Recognition Experts.

The costs of more DUIs will only enrich lawyers, drug-testing programs, probation companies, and vehicle-installed DUI device corporations. Additionally, research indicates that THC tests of saliva and THC-blood levels are no indication of impairment and can remain in a person’s system for up to 30 days following consumption.

While the GHSA’s report appears to be concerned with “highway safety,” it relies on highly subjective and unreliable data to arrive at its conclusions and subsequent recommendations.

Many Emergency Room doctors or nurses can testify that it is often the drunk driver who survives an accident whereby other drivers are killed. However, such qualitative data is absent from GHSA’s data analysis, which used the National Highway Transportation Safety Administration (NHTSA) stats from 2006, 2015, and 2016 to arrive at its conclusion that more drivers who die in accidents were on drugs than alcohol. GHSA reported:

Wow! Isn’t that a convenient statistic? The alcohol industry paid for a report that appears to show drugged drivers were more likely to die in accidents than alcohol-impaired drivers. All of which should come as no surprise to those who funded the report. Fortunately, as TFTP has reported, these myths have already been debunked by researchers who are not being paid by Big Alcohol:

Citing the National Highway Traffic Safety Association, Forbes reported that not only is marijuana use safer than alcohol use when it comes to driving, but far fewer fatalities are recorded when marijuana is present than when alcohol is present in traffic fatality instances. “It looks like marijuana’s impact on traffic safety has been greatly exaggerated,” writes Forbes.

Research from the American Automobile Association (AAA) has also shown that no scientific basis exists to legitimize current THC testing because a blood test threshold for THC—the chemical component of cannabis that makes people ‘high’—is not scientifically possible:

Those tests employ a blood level-based judgment similar to that used for determining alcohol impairment. But AAA found such tests for THC are wholly unreliable—sending potentially unimpaired drivers to jail and putting impaired drivers back behind the wheel.

There is understandably a strong desire by both lawmakers and the public to create legal limits for marijuana impairment in the same manner we do alcohol,” said AAA president and CEO, Marshall Doney, as reported by the Associated Press. “In the case of marijuana this approach is flawed and not supported by scientific research.”

Not only does it appear that the GHSA’s statistics are flawed, but it is also clear that they do not align with other non-biased organizations’ conclusions. However, one of the most disturbing issues that have been revealed by this report is the fact that the alcohol industry is training law enforcement officers, prosecutors, and lawyers on how to detect, charge, litigate, and prosecute cannabis users in the judicial system.

Welcome to my world, 3% Hydrogen Peroxide up to half hour before test may work for Ganga, Reducing the delta 9 THC to its Carboxylate form that's not tested for

cheeki kea commented on Central Scrutinizer's blog post California Halts COVID Vaccinations From Moderna Batch Linked To "Unusually High Number" Of Adverse Reactions
"Well this is no good for public confidence. How are they going to win the hearts and minds ~~ to…"
10 minutes ago

Chris of the family Masters posted discussions
12 minutes ago

Chris of the family Masters commented on Central Scrutinizer's blog post Hunter Biden Report is Out (Get the PDF here)
"Saved...."
25 minutes ago

A life of a political animal is full of deception, lies and underhanded deals. But don't overlook…
4 hours ago
0 Comments 0 Favorites

Less Prone replied to MAC's discussion Just a little private talk hear amongst our selves.
"A hell of a show they are giving us with all the twists, turns and drama. The future of not only…"
4 hours ago

MAC replied to MAC's discussion Just a little private talk hear amongst our selves.
"I hear yeah CS, I don't know why he called the people to DC, show of support, not sure. I know…"
5 hours ago

MAC replied to MAC's discussion Just a little private talk hear amongst our selves.
"Mike Adams came over to my way of thinking... Although, I believe the military will bus the…"
5 hours ago

Central Scrutinizer replied to MAC's discussion Just a little private talk hear amongst our selves.
"Hilarious interview years ago (now lost to the "U SHALL NOT PASS ether world) back when that…"
5 hours ago