How Mushrooms Can Clean Up Radioactive Contamination - An 8 Step Plan

How Mushrooms Can Clean Up Radioactive Contamination - An 8 Step Plan

Paul Stamets, the master of mycorrhiza, describes how to isolate the radioactive material at Fukushima, specifically Cesium 137, and reduce its impact on the surrounding land and its wildlife and people.

Many people have written me and asked more or less the same question: "What would you do to help heal the Japanese landscape around the failing nuclear reactors?"

The enormity and unprecedented nature of this combined natural and human-made disaster will require a massive and completely novel approach to management and remediation. And with this comes a never before seen opportunity for collaboration, research and wisdom.

The nuclear fallout will make continued human habitation in close proximity to the reactors untenable. The earthquake and tsunami created enormous debris fields near the nuclear reactors. Since much of this debris is wood, and many fungi useful in mycoremediation are wood decomposers and build the foundation of forest ecosystems, I have the following suggestions:

1. Evacuate the region around the reactors.

4. Chip the wood debris from the destroyed buildings and trees and spread throughout areas suffering from high levels of radioactive contamination.

5. Mulch the landscape with the chipped wood debris to a minimum depth of 12-24 inches.

6. Plant native deciduous and conifer trees, along with hyper-accumulating mycorrhizal mushrooms, particularly Gomphidius glutinosus, Craterellus tubaeformis, and Laccaria amethystina (all native to pines). G. glutinosus has been reported to absorb – via the mycelium – and concentrate radioactive Cesium 137 more than 10,000-fold over ambient background levels. Many other mycorrhizal mushroom species also hyper-accumulate.

7. Wait until mushrooms form and then harvest them under Radioactive HAZMAT protocols.

8. Continuously remove the mushrooms, which have now concentrated the radioactivity, particularly Cesium 137, to an incinerator. Burning the mushroom will result in radioactive ash. This ash can be further refined and the resulting concentrates vitrified (placed into glass) or stored using other state-of-the-art storage technologies.

By sampling other mushroom-forming fungi for their selective ability to hyper-accumulate radioactivity, we can learn a great deal while helping the ecosystem recover. Not only will some mushroom species hyper-accumulate radioactive compounds, but research has also shown that some mycorrhizal fungi bind and sequester radioactive elements so they remain immobilized for extended periods of time. Surprisingly, we learned from the Chernobyl disaster that many species of melanin-producing fungi have their growth stimulated by radiation.

The knowledge gained through this collaborative process would not only benefit the areas affected by the current crisis, but would also help with preparedness and future remediation responses.

How long would this remediation effort take? I have no clear idea but suggest this may require decades. However, a forested national park could emerge –The Nuclear Forest Recovery Zone – and eventually benefit future generations with its many ecological and cultural attributes.

I do not know of any other practical remedy. I do know that we have an unprecedented opportunity to work together toward solutions that make sense.

For references consult my latest book, Mycelium Running: How Mushrooms Can Help Save the World (Ten Speed Press, Berkeley or www.fungi.com). Click this link to see a video too! Utilizing search engines of the scientific literature will also reveal more corroborative references.

*This article is crossposted from hopedance.org* 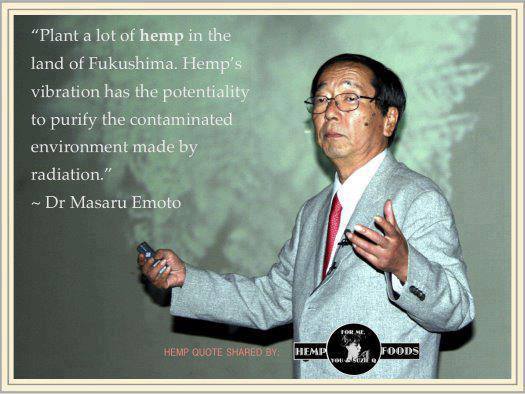 Dr. Masaru Emoto Discusses Industrial Hemp and the Need for This Plant in Japan, Especially Around Fukushima

Dr. Emoto suggests a lot of hemp be grown in the area around Fukushima. He is a great supporter of the  movement for Industrial Hemp world-wide. See here:

Hemps vibration? How about we grow some hemp on tainted soil and, instead of checking its "vibration", run a geiger counter over it?

Results count ... mystical hand-waving does not. 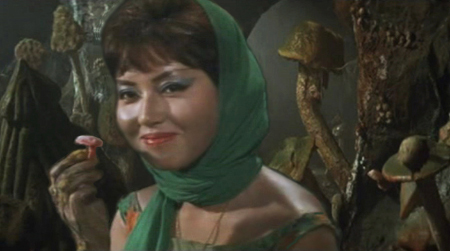 Just in case, I thought I'd ask if anybody knows or has heard that radiation dissipates in Ocean Salt Water???

Ocean Salt Water is Not just salty water. It contains the essence of LIFE and is like a "soup" containing minerals, large and very small plant and animal life, and also has sources which come from under ground from the inside of the Earth's Core as well as fresh water, sulfur springs, and there are also plants/algae that produce Oxygen.

Just asking for a few of you "scientists" out there.

Well yes it "dissipates" kind of like a drop of food coloring "dissipates" Or like light dissipates leaving a flashlight.

Now if you are suggesting does it render it inert? No. That can only happen in a fusion process. like when you use hydrogen and oxygen to weld.

If you use the two to basically weld the radioactive material the by product is inert non radio active metal.

The only other process is half lives and time.

You see in the fusion process atomic particles become bonded to the radio active particles rendering them stable and non ionic.

So I guess WE all know where Godzilla came from right???

Seems to me someone should be doing something about the contamination??? Or is there?? If Nuclear subs operate on nuclear energy, too bad they don;t have a special vaccum cleaner to suck in some contaminated sea water and extract the toxins??

I have heard a member of the "Silent Service" on George Noory/Art Bell last week and this Man admitted they had TWO water purification devices on board instead of just one. Which means they can operate indefinitely depending on how much food they have.  He also mentioned the SUB can go to depths all the way to the BOTTOM of the Sea(Marianas Trench ) which is about 6 miles or more???The Mariana Trench or Marianas Trench[1] is the deepest part of the world's oceans. It is located in the western Pacific Ocean, to the east of the Mariana Islands. The trench is about 2,550 kilometers (1,580 mi) long but has an average width of only 69 kilometers (43 mi). It reaches a maximum-known depth of 10.911 km (10,911 ± 40 m) or 6.831 mi (36,069 ± 131 ft) at the Challenger Deep, a small slot-shaped valley in its floor, at its southern end,[2] although some unreported measurements place the deepest portion at 11.03 kilometers (6.85 mi).[3]

Navy subs cannot go that deep. 450 to 600 feet maximum. Water purification plants on ships cannot remove single atom contamination. They are distilling plants, I operated the 2 each 20,000 gpd plants on the USS Ticonderoga CG 47and the USS Carr FFG 52.  They are not "filtration units" and their efficiency is based on the level of standard water contamination they are operating within.

I am not sure what "food" has to do with it but I do know when they are not operating to efficiency because of the crappy water near ports many a sailor has to go on shower hours, If one unit fails then it really sucks.

As for the "Silent Service" I am not sure what that really means. Silent operating refers to tactical maneuvers while at sea when being tracked by "enemy forces". Most times the masker air system reduce the vessel noise to the point of sounding like rain.

Quite often whackos get on alternative blog talk radio stations. I worked for NAVSEA and Mobile Technical Unit 10 out of Charleston Naval Station before it was closed. While in the Mediterranean I was assigned to the sub tender USS Puget Sound AD-38. While in the shipyard in Pascgoula Miss I worked on a few submarines brought in for refit.

The only "sub" that I worked on for deep sea was the DSRV assigned to the USS Ortolan.

I have four of Paul's books on my desk (was reading one, "The Mushroom Cultivator" immediately before I checked my e-mail and found the link to this excerpt) and cannot recommend him highly enough. If you think of yourself as a prepper, you need his books. If you are interested in treating disease (including stage 4 cancers), you need to view this TEDMed Talk. In the event of societal failure, mushrooms will move back into our medicine cabinets -- via our dinner plates -- anew; avoid the rush, school yourself now.

I missed this the first time it was posted - with all the recent and worsening news on the Fukushima nuclear power plant disaster, along with the equally important fact, of the underhanded and devious acts of TEPCO and Japanese 'officials', this mushroom/reforesting (Hemp) plan is worth implementing sooner, rather than later - they need to really start to do something worthwhile.

I think its a way to get rid of seven million people; given the way 'they' have dealt with the worlds greatest nuclear disaster - been seeing a lot of reporting on Fukushima on RT News lately.

Thanks again for re-posting.

"Strange they'll bring this in after the Queen had passed on. Actually perhaps it's not…"
8 hours ago

The WEF plan for '15 minute cities' is already rolling out to keep you from driving and leaving a certain radius. Now cities in England and launching these n...
10 hours ago
1 Comment 0 Favorites

"Would not be surprised if the polio vaccine caused HIV/AIDS.  This is how they do things,…"
19 hours ago

Much to the chagrin of the Democrats and the left, Elon Musk, the CEO and new owner of Twitter…See More
21 hours ago
0 Comments 0 Favorites

Watch The Origins of AIDS (2004) Full Documentary on TheGrapevineA documentary about the hypothesis that HIV may have been caused by mass vaccination against...
22 hours ago
1 Comment 2 Favorites