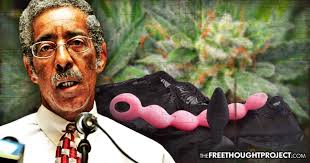 (Support Free Thought) - New Jersey — Just when we start to garner a little hope for humanity, almost like clockwork some insane politician comes out and tries to ruin it. For those who thought reefer madness was a thing of the past, a lawmaker in New Jersey will quickly reverse that thought.

State Sen. Ronald Rice (D) —a lawmaker who calls himself a “progressive” — recently told reporters that he believes marijuana is a gateway drug that if legalized will lead to the selling of “sex toys and oils” all over the state. Rice, completely contradicting the massive evidence to the contrary, claims that if New Jersey legalized cannabis, “the number of people who’ve never used any type of drugs goes up substantially in terms of drug use.”

However, as TFTP has reported, Rice is dead wrong. Even the government’s own studies show that legalizing weed actually reduces teen drug use, opioid addiction, as well as prescription drug use.

As TFTP reported last year, the Washington State Institute for Public Policy commissioned the study. It found that pot use among teens fell from 20 percent in 2010, to just 17 percent in 2016. The survey asked nearly 11,000 high school sophomores if they’d consumed cannabis within the last month. The results indicate not only are fewer teens using cannabis on a monthly basis, but the fears that teens would become pot addicted were unfounded.

What’s more, Rice’s comment about marijuana being a gateway drug is also an outlandish conspiracy theory, proven wrong time and again by science.

Legal weed is actually the opposite of a gateway drug as it helps people to stop using other drugs.

In the latest of dozens of studies proving the healthful benefits of cannabis, researchers in Canada found not only can marijuana be effective in managing pain, but it can reduce a user’s dependency on tobacco, alcohol, and can replace a number of prescription medications — including antidepressants.

The study specifically found that marijuana isn’t the “gateway drug” politicians and detractors have claimed it is for decades.

Published in the International Journal of Drug Policy, the study — comprised of 271 participants enrolled in Canada’s Marihuana for Medical Purposes program — is considered one of the first to evince how cannabis can help alleviate substance addiction.

But these facts are apparently irrelevant to the New Jersey lawmaker who thinks that legal weed will turn people into drug raged sex addicted zombies.

Rice had no problem expressing his reasoning behind his fear of legal weed either — it will mess up the “white” people.

“I’m five blocks away from Seton Hall University in South Orange, New Jersey which is a predominant rich, upper-middle class, white community, college community. What we know is that when you legalize marijuana recreationally, the number of people who’ve never used any type of drugs goes up substantially in terms of drug use,” Rice said.

Again, Rice is entirely wrong and has zero evidence to back up his claims. But facts be damned, no one will sell weed to his white upper-class friends.

Luckily — for the sake of sanity and humanity — Rice is opposed by many in the state who are pushing to legalize weed in order to stop the senseless incarceration of otherwise innocent people and even expunge the records of those who’ve been arrested for weed in the past.

Holley is also supported by the governor, Phil Murphy who noted that “You can’t incarcerate somebody who did something on Friday, and allow someone who did the same thing on Monday to do it legally.”

As the marijuana debate continues, those who continue to push the reefer madness on their citizens, are quickly being exposed for the lunatic drug warriors they are.

For Monkey Werx gear and products, go to https://www.monkeywerxus.com/shopYou can help support the channel and watch live SITREPs at https://www.patreon.com/...
2 hours ago
0 Comments 0 Favorites

MAC replied to Ragnarok's discussion 15,000-year-old viruses discovered in Tibetan glacier ice
"I'm sure Hes on it, don't let a virus go to wast."
3 hours ago

"Don't be put off by the title of the video. The guy also discussed the grave, very grave…"
14 hours ago