Nobel peace prize jury under investigation over choosing such winners as President Obama,

STOCKHOLM, Sweden (AP) — Nobel Peace Prize officials were facing a formal inquiry over accusations they have drifted away from the prize's original selection criteria by choosing such winners as President Barack Obama, as the nomination deadline for the 2012 awards closed Wednesday.

The investigation comes after persistent complaints by a Norwegian peace researcher that the original purpose of the prize was to diminish the role of military power in international relations.

If the Stockholm County Administrative Board, which supervises foundations in Sweden's capital, finds that prize founder Alfred Nobel's will is not being honored, it has the authority to suspend award decisions going back three years — though that would be unlikely and unprecedented, said Mikael Wiman, a legal expert working for the county.

For this year's award, Russian human rights activist Svetlana Gannushkina, jailed former Ukrainian Prime Minister Yulia Tymoshenko and Cuban rights activists Oswaldo Paya and Yoani Sanchez are among the candidates who have been publicly announced by those who nominated them.

Lol would love to see the MSM cover this story.

They're still wiping the egg off their faces after giving the prize to Obama.

... yea, and the brown off their noses. Bet they're still checking the bottom of their shoes too. 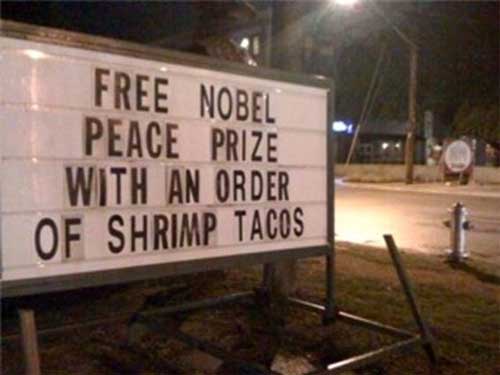 Permalink Reply by Central Scrutinizer on February 9, 2012 at 4:16pm

So thats where Barry got one from ;)

Hey KRYPKE,maybe they were howling and licking each other, when they made their decision for Obama too!

leave em a polite but opinionated comment (middle-right of page, "Comments" balloon), ya know I did ;)