Obama/Akhenaten, The Wrath of Pharaoh of AmunRA/ god of the Illuminati(Illuminatious Of Serpents) House of Pharaoh Deception Agenda. 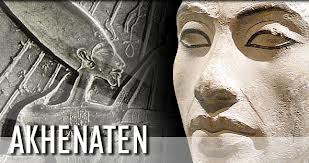 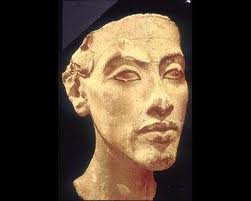 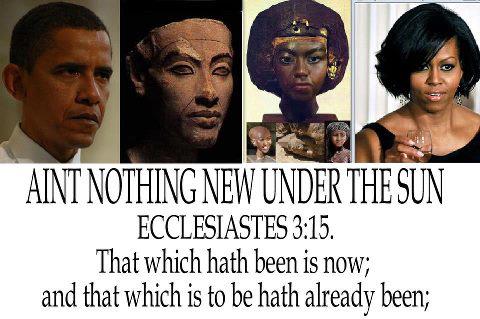 Here's my research on Obama, He looks like the Ancient Pharaoh Akhenaten/Tutankamun. I will show you pictures I have of him, his wife and 2 daughters. I have much to share that proves Obama is the Modern Flesh of Pharaoh!! The image of AmunRA/Osiris---Akhenaten/Tutankamun. Here's some pictures to show the match between the Pharaoh Royal Egyptian Family of Akhenaten/Tutankamun. And my second post will show the my first Revelation for 2013, and how the Illuminati and Obama have a Agenda of the Egyptian Pharaohs of the Babylonian System. And this Agenda can be found in these and Obama's character is sealed in these Ancient Egyptian Mystic books for the youth, published by Rick Riordan, Authored by Disney. So there will be a second posting to this.

Note: This will only work for those that have Facebook, not sure. 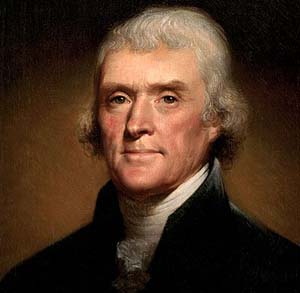 "There is scarcely a king (or would-be-king) in a hundred who would not, if he could, follow the example of Pharaoh—get first all the peoples money, then all their lands, and then make them and all their children slaves forever." — Thomas Jefferson Writings of Thomas Jefferson

I believe that the man Jefferson was writing about Obama, or he was writing about the coming of such a dictator of Ancient ways, if America ever lost its Freedoms and Liberty, I find this interesting.
Pictures of Obama's Family and they Mirror the Ancient Egyptian Royals of Akhenaten/Tutankamun, this is showing Michelle, Sasha and Malia and there Ancient Egyptian Busts that looks like them. 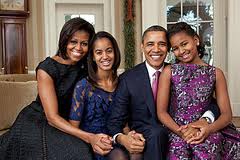 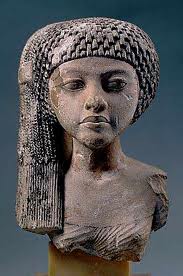 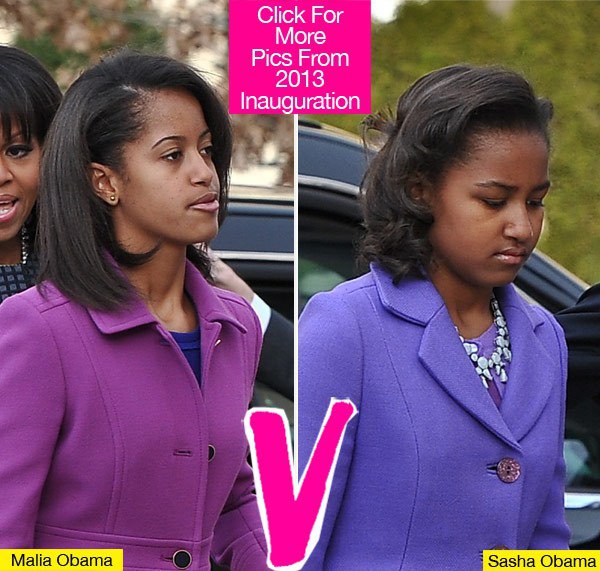 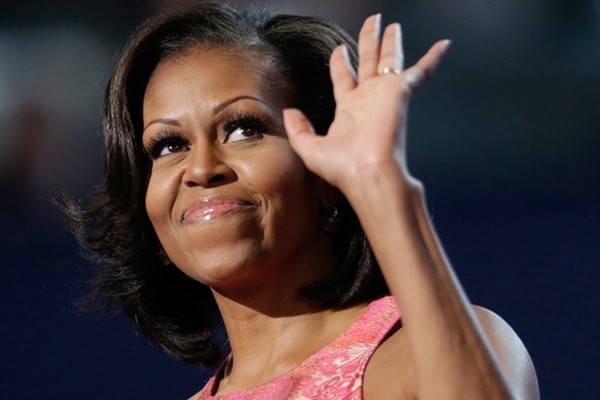 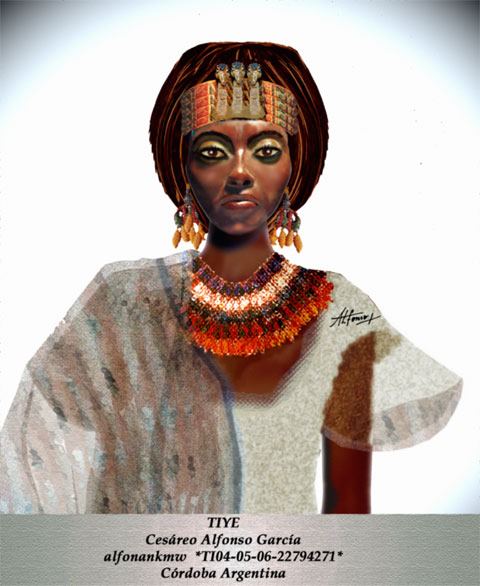 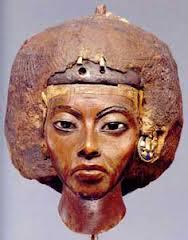 Those speculations are some years old

"... and how the Illuminati and Obama have a Agenda of the Egyptian Pharaohs of the Babylonian System."

Problem 1: What was "Illuminati" has been replaced.
Problem 2: We don't know the "Agenda of the Egyptian Pharaohs"
Problem 3: It is all beyond anyone's comprehension

Well I learned about this stuff in 2011, didn't want to believe it, God has shown me this to be so, and with our Christian Bible, nothing is hard to comprehend with his Gloryness, our God Jesus Christ. Yes by a physical sense all this is beyond comprehension. But with God it is not. And Obama is a very bad man and along with all the corrupted Government behind him. I don't go by my own knowledge and wisdom, but by the knowledge and wisdom of the Most God, our Lord Jesus Christ. :) And if you look around there is a real EYE of Horus system and Agenda, not saying this Agenda came form the Pharaoh's, this Evil Agenda was handed to them by Babylon and the Fallen Angels and others that fallowed Satan before the Ancient Egyptians. All this started in the Garden of Eden. The Agenda is Eugenics and mind-control by Electro Magnetic and manipulation, to destroy many for the coming Antichrist!! The New World Order!! This is Satan's goal!! And I do study the technologies and ways of the Ancient Egyptians, so also in a research fashion in more then one field in these studies, this is so.

"Obama is a very bad man and along with all the corrupted Government behind him."

I can relate to what is practical. I believe Obama was selected as posterboy .. by a people with 1000 years of political knowledge. These agendas about taking down France (they are anti-French), Russia (they are anti-Russian), Germany (they are anti-German), Russia a second time ... now USA (they are anti-American) (and China in future? - they are anti-Chinese) is not about one person (Obama is expendable). We are facing something bigger. Then you will say Satan. I prefer to think about them as just satanists at worst .. being in control of world's money. Sometimes they are easy to identify, like Diane Sawyer - but there is maybe 40 millions of them? They are afraid of losing their power of course.

Of course this is bigger then anyone can image, bigger then Obama's Image and I do agree Obama is selected a poster-boy also, all about Charm, to appear good so he can sway and charm the masses. So he can destroy America!! And yes There is definitely at least a 1000 years of Political knowledge and I would add to this. More like 5,000 years of Political Knowledge. That's how I see it. And this explains what I show here. The Pharaohs were part of the Ancient One World Global System of Babylon, Ancient Egypt was just one part of a bigger Empire, Babylon. And this is were we are headed for is The New World Order, Mystery Babylon. See the Ancient World was a completely World in itself, before the construction of Europe, then the Americas. Ancient Egypt was a Superpower for Babylon. Anyways I agree with you on that its much bigger then we can comprehend, I wait on God to give knowledge and wisdom. Yeah and I do believe Obama is expendable and yes its about other people as well that's in this. Obama ant the only one. But I believe hes the image of the godhead of the Illuminati, AmunRA/Osiris. The Illuminati and Masonry are very Ancient Egyptian in Rites and Ceremony. I know of people that are into Egyptian Kabbalaholgy , not good stuff. Its all about the bigger picture, what I call Satan and his Fallen Angels. AKA Mystery Babylon. Obama and his image is being used by these wicked bloodlines to take America down and Ancient Egyptian Spiritualism is there tools against America!! I know Obama ant to blame for all this, I am just sharing my side of this that God shows me and my research shows me. My stuff is much more then what Freeman states. I am going to be sharing some discoveries I have made about Obama, a school Teacher named Rick Riordan of San Antonio Texas of these Ancient Egyptian series books targeted at the Modern youth, to brainwash them to serve Obama's Despot Egyptian ways. Adolf Hitler did the same in Nazi Germany and I do realize many other wicked Despot leaders down the Ages have done this too, I'm sure. Making Youth Armies serving its wicked government. And there is much Spiritual Dark knowledge of the Ancients form Ancient Politics being put into the US Government to overthrow our Constitution and Freedoms. That a normal President could not do. yes realize many of our presidents were Masons. There is a allot of interesting History about the United States. And Obama plays like hes some Messiah, like he can take care of us, this is a Disillusion.

A closer look at Knights Templar

... The French Revolution was a Rothschild plot against the King of France for wiping out the Knights Templar. Every time their plot of Revenge comes back to the countries that oppose them. Khazar Jews were behind the Knights Templar, yet only French Nobles are mentioned as the Jews are kept out of Every plot that has them in it.

(but don't expect any Freemason to admit this. Here ( 0:00-20:00) http://www.youtube.com/watch?v=336N7Ud9Kso Rivero states Knights Templar learned many secrets from the Muslims. Knights Templar were keen archeologists during their time in Jerusalem)

Wikipedia wants us to believe it is a visualisation of "sin"

"Sins of the Flesh" were often represented by human figures poking out their tongues, stroking their beards, displaying their genitals or gorging on food.

Here's a Ancient Egyptian statue of Queen Tyie, the one that looks like Michelle Obama, the first Lady. Queen Tyie was Pharaoh Akhenatens mother. And now she is Modern Akhenatens wife, Obama, yuck!! I guess the system of the Pharaohs believed in keeping it all in the Family. They thought it made them like gods and goddess. 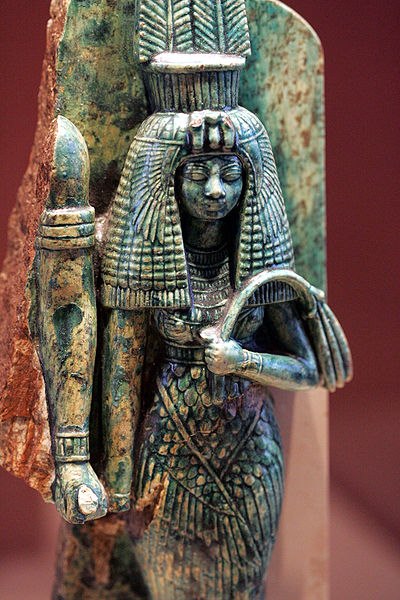