Revealed: Hundreds of words to avoid using online if you don't want the government spying on you

The Department of Homeland Security has been forced to release a list of keywords and phrases it uses to monitor social networking sites and online media for signs of terrorist or other threats against the U.S.

The intriguing the list includes obvious choices such as 'attack', 'Al Qaeda', 'terrorism' and 'dirty bomb' alongside dozens of seemingly innocent words like 'pork', 'cloud', 'team' and 'Mexico'.

Released under a freedom of information request, the information sheds new light on how government analysts are instructed to patrol the internet searching for domestic and external threats.

The words are included in the department's 2011 'Analyst's Desktop Binder' used by workers at their National Operations Center which instructs workers to identify 'media reports that reflect adversely on DHS and response activities'.

Department chiefs were forced to release the manual following a House hearing over documents obtained through a Freedom of Information Act lawsuit which revealed how analysts monitor social networks and media organisations for comments that 'reflect adversely' on the government.

However they insisted the practice was aimed not at policing the internet for disparaging remarks about the government and signs of general dissent, but to provide awareness of any potential threats.

Thanking his drug dealer in his yearbook and inventing the best ways to inhale: Book lifts lid on 'Barry' Obama's marijuana-smoking school days
Passengers restrain man on an American flight from Jamaica after 'he tried to rush the cockpit after landing'
Undercover US agents brought down our new Superjet: Russia’s extraordinary claim about crash which killed 45

The list has been posted online by the Electronic Privacy Information Center - a privacy watchdog group who filed a request under the Freedom of Information Act before suing to obtain the release of the documents.

In a letter to the House Homeland Security Subcommittee on Counter-terrorism and Intelligence, the centre described the choice of words as 'broad, vague and ambiguous'

They point out that it includes 'vast amounts of First Amendment protected speech that is entirely unrelated to the Department of Homeland Security mission to protect the public against terrorism and disasters.'

A senior Homeland Security official told the Huffington Post that the manual 'is a starting point, not the endgame' in maintaining situational awareness of natural and man-made threats and denied that the government was monitoring signs of dissent.

However the agency admitted that the language used was vague and in need of updating.

Spokesman Matthew Chandler told website: 'To ensure clarity, as part of ... routine compliance review, DHS will review the language contained in all materials to clearly and accurately convey the parameters and intention of the program. 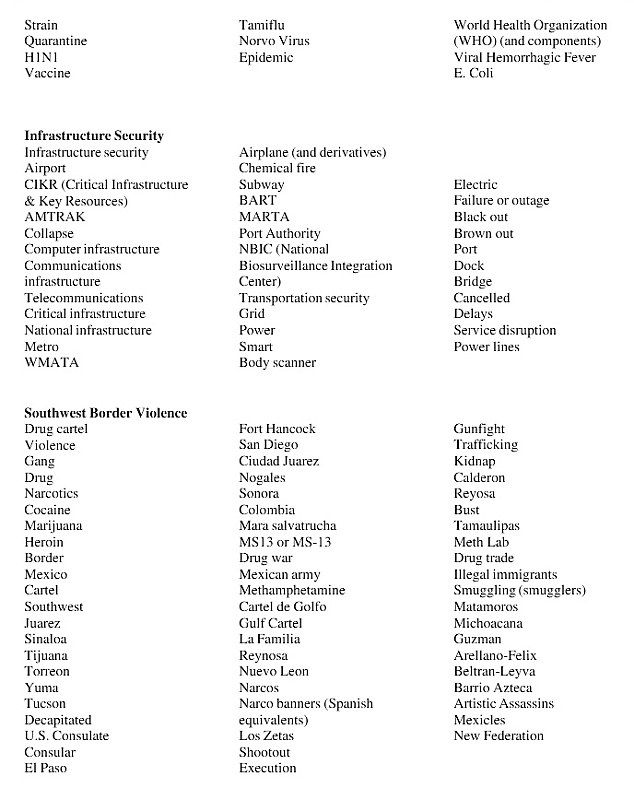 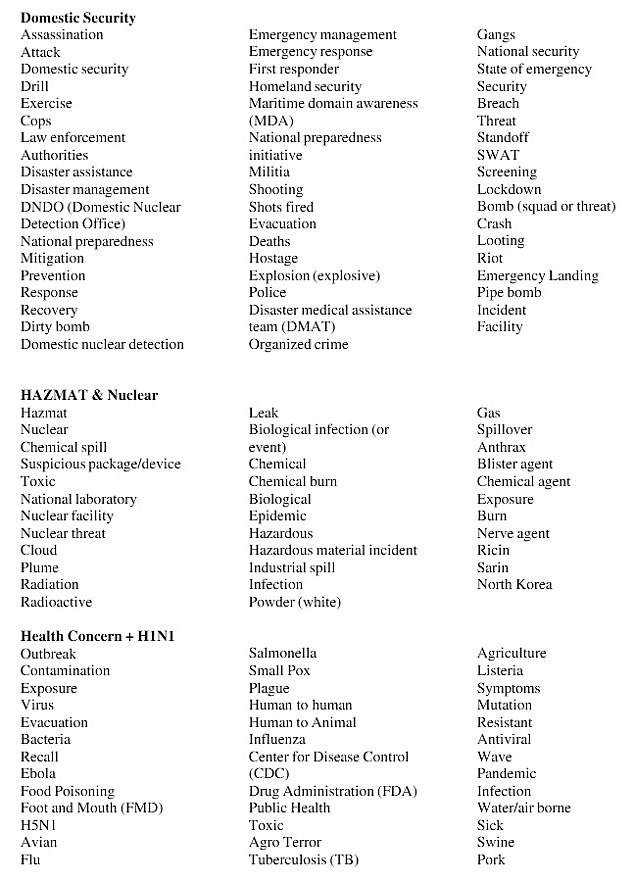 "https://telegra.ph/NATIONALISM-FOR-EXPORT-05-19  Azov fighters have failed and now resort to…"
14 hours ago

"Correct. Some of these truth diggers are so good they get the Full truth out there before the lie…"
16 hours ago