WASHINGTON -- The request for troops sent to President Barack Obama by the top U.S. commander in Afghanistan includes three different options, with the largest alternative including a request for more than 60,000 troops, according to a U.S. official familiar with the document.

Although the top option is more than the 40,000 soldiers previously understood to be the top troop total sought by Gen. Stanley McChrystal, the top U.S. officer in Kabul, 40,000 remains the primary choice of senior military brass, including Gen. McChrystal, the official said. 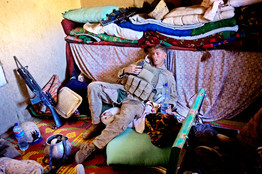 A Marine on Thursday rests during a mission in the restive Bhuji Bhast Pass in Afghanistan's southern Farah province. His company was inserted Wednesday via helicopter to clear insurgent forces from villages.

The details of the three scenarios were first reported by ABC News and confirmed by the U.S. official. The third option presented to Mr. Obama would be only a small increase that would keep U.S. forces largely at their year-end levels of 68,000 troops.

The troop request is expected to be deliberated today at Mr. Obama's fifth cabinet-level meeting of his war council amid indications of growing official unease about such a significant escalation.
Journal Community


Although most requests for forces include only a single troop figure, Pentagon officials have acknowledged that Gen. McChrystal's request was unusual given the continuing review of Afghan strategy. It is rather common in military planning, however, to discuss three different scenarios in order to illustrate why the middle option is preferable option.

Gen. McChrystal has warned that the U.S. faces possible "mission failure" in Afghanistan unless it quickly sends large numbers of forces there. But the Obama administration faces growing hurdles even if it decides to go with a buildup of tens of thousands of troops.

Senior Army officers acknowledged in interviews, for instance, that the U.S. doesn't have nearly enough helicopters in Afghanistan to meet the current demand for safe movement of troops around the country. And U.S. forces are just beginning to receive new vehicles meant to function better on Afghanistan's poor roads.

Separately, a recent study by the Institute for the Study of War -- a Washington, D.C., think tank headed by Kimberly Kagan, a military analyst who worked on Gen. McChrystal's assessment team -- suggested it would be difficult to move enough troops from other posts to deploy anywhere close to 40,000 troops before next summer at the earliest.

The military agrees with the institute's overall findings, although has identified different units it could deploy over the course of the next year.

White House officials acknowledged that Mr. Obama's review is centering on ensuring the war is focused on preventing al Qaeda's return to Afghanistan -- a narrower objective that could require fewer, if any, new American troops. The officials acknowledged that the administration's strategic review no longer sees the U.S.'s primary mission in Afghanistan as completely defeating the Taliban or preventing the armed Islamist group from any involvement in the country's future.

Despite the narrowed focus, several White House officials said the administration's broad review is ongoing and that the president hasn't made any decisions. They said Mr. Obama wants to decide on what military strategy to pursue before approving or rejecting Gen. McChrystal's request.

Still, focusing the U.S. mission in Afghanistan solely on destroying al Qaeda could make it easier for Mr. Obama to make a public case for giving Gen. McChrystal the lowest end of his three options, which would amount to only a small increase.

Political support for the war has been rapidly eroding among the public and on Capitol Hill, even as Gen. McChrystal and the nation's top military personnel argue for a counterinsurgency strategy designed to protect Afghan civilians.

At the center of the ongoing deliberations, according to officials involved in and briefed on the White House sessions, is an emerging belief that a broad effort to defeat the Taliban and shore up Afghanistan's weak central government may not be necessary to counter the threat posed by al Qaeda.

White House officials familiar with deliberations said that while some elements of the Taliban were inclined to harbor al Qaeda, which operated freely in Afghanistan through 2001, other members were focused on Afghanistan's internal politics and much less likely to support the international terror group.

White House spokesman Robert Gibbs told reporters Thursday that al Qaeda has focused on hitting the U.S., while danger posed by the Taliban "was somewhat different" and less threatening.

The argument that a return of some Taliban elements would not directly threaten U.S. security has been pushed by allies of Vice President Joe Biden, who has argued against a major increase in force levels. The distinction Mr. Biden draws is shared by Barnett Rubin, a top aide to the administration's special representative to the region, Richard Holbrooke.

Defense Secretary Robert Gates, arguably the central player in the deliberations, is one of the officials who appears to most strongly disagree with that assessment. Earlier this week, the defense chief said that a Taliban takeover of wide swaths of Afghanistan would allow al Qaeda to "strengthen itself" by creating new havens for the terrorist group.

But participants in the current review said that neither Mr. Gates, who picked Gen. McChrystal for his job, nor Secretary of State Hillary Clinton have yet made clear what strategy they favor in Afghanistan or what forces should be sent there.

The Institute for the Study of War report detailed how the White House must grapple with the fact that the stretched U.S. military has only limited troops ready for deployment, which could mean that many forces might not reach the war zone until the summer of 2010.

The study concluded that the U.S. has only three Army and Marine brigades -- about 11,000 to 15,000 troops -- capable of deploying to Afghanistan this year. An additional four brigades, or potentially as many 20,000 troops, could deploy by the summer of 2010, the think tank concluded.

Lt. Col. Lee Packnett, an Army spokesman, said that the Army wanted to only send units to Afghanistan that have had at least 12 months back in the U.S. between overseas deployments.

But Anthony Cordesman, a military expert at the Center for Strategic and International Studies, said that Mr. Obama could force the military's hand if he decides winning the war requires a quick infusion of large numbers of reinforcements. "In the real world you do what you need to do," he said. "You don't tailor the war to maintain peacetime readiness. You maintain peacetime assets precisely so you can consume them in war."

Lack of helicopters and other equipment problems could present a more intractable problem for a bigger force trying to reach Afghanistan's key battle zones. The country is mountainous and lacks reliable roads, so most troops and supplies are ferried to their bases aboard helicopters rather than on trucks or other ground vehicles.

Last summer, the Army deployed a second combat aviation brigade to Afghanistan, doubling the number of Army helicopters there from 114 to about 228. But with U.S. troop levels almost doubling in 2009, senior Army officers acknowledge that the U.S. still doesn't have nearly enough. "Simply put, we just don't have enough birds," one officer said in an interview this week. "The Taliban have made more and more of the roads inaccessible to us, so the need for helicopters keeps growing."

The military has also found that the signature vehicle of the Iraq war -- the giant armored trucks known as the "mine resistant, ambush protected" vehicles, or MRAPs -- don't function well on Afghanistan's poor roads. The Pentagon is in the process of purchasing hundreds of second-generation armored vehicles that are specially designed to function off-road or on dirt or gravel paths, but the first of the new vehicles only began arriving in Afghanistan in recent days.

"Hey thanks for your comments guys. I like to put up links to photos and blogs but when I looked…"
13 hours ago

steve replied to Sandy's discussion Nonbinary teacher boasts on changing students' genders without parents knowing: 'They need protection'
"This evil must be stopped, these fkn perverts are nothing but child predators and should be SHOT ON…"
14 hours ago

"Why is it that those who have the least power, not those who led us to die, are blamed. Many of us…"
19 hours ago

My job, which is a public service, is to protect kids… Sometimes, they need protection from their…See More
21 hours ago
1 Comment 0 Favorites

"The attacker, no details about him. Could it be a mental disorder like Islam? Oh but you can't…"
22 hours ago