Thank you for all you have done to help me in my journey over the past years. It has been an honor to stand shoulder to shoulder with you. Slowly but surely, in our struggle for freedom from authoritarianism, we are making progress. As long as we continue to hang together, we will not hang separately!

After leaving the Marine Corps, I joined the monumental fight to end the occupations of Iraq and Afghanistan, bring our troops home to defend America, and restore a Constitutional foreign policy. Having won the public to our side, it is time we take the fight to the capitol, to the real enemies of the Constitution. Posturing against war while voting to fund it is unacceptable! Tragically, we still have a government that behaves like it owns us, rather than serves us.

Since I was first politically active, people have been encouraging me to run for Congress, including a recent effort to “draft” me to run (draftkokesh.com). We need rallying points to keep our movement invigorated and growing, and if a run for Congress from my home town of Santa Fe can serve as one, I will gladly step up. In that spirit, I am excited to announce the formation of the Kokesh for Congress Exploratory Committee.

While I am asking for your financial support in this effort, I want to make it clear that I am willing to make the personal sacrifices necessary to raise the standard of our national leadership. If elected, I will not accept the Congressional salary of approximately $170,000, but only the national average income. It is unbearable in these difficult times, for Congress to tell the American people what is best for us economically while they vote themselves another pay raise and burden our children with impossible debt. Enough is enough!
There is a temporary website up now at kokeshforcongress.com. Please sign up and donate there as we prepare for the launch of a complete site on June 1st.

It is time once again to draw the line between patriots and loyalists. I am a patriot because I am committed to the ideals of liberty and equality this country is destined to achieve, loyal to no false authority. I know that much more than political resistance is required to achieve a paradigm shift, but we can do no wrong standing up for what we know to be morally right. Regardless of my decision, I remain eternally committed to the cause of liberty.

Welcome to a New Political Idea

You need to be a member of Adam Kokesh 4 Congress - Marine Corps War Veteran and Patriot Needs Your Support ! to add comments!

Adam is doing a special show today on his arrest at the Jefferson memorial for dancing.

The show is here http://rt.com/on-air/rt-america-air/

Every week day at 7pm EST he's on with a new show, check it out!!

The Federal Reserve will be audited to conduct a search for what many believe has been a problem of to much lending. Of course, the audit has a few conditions that the auditors will have to abide by. The audit will be conducted only this one time, it is not to interfere with authority to set monetary policies, it will have to focus on December 2007 until now and the results must be posted by December 1st. 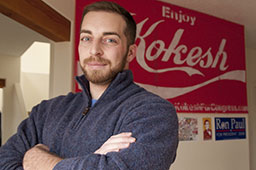 Adam is featured in the Santa Fe Reporter.

Comment by truth on January 31, 2010 at 10:31pm
Adam Kokesh Money Bomb - Midnight Tonight! "Keep Grassroots Money i...Submitted by Michael Nystrom on Sun, 01/31/2010 - 22:16
in
February 1st is Freedom Day, and also Adam Kokesh's birthday.
Let's give this grassroots Liberty candidate the biggest outpouring of support we can.

DONATE AT KOKESH FOR CONGRESS.COM

Comment by truth on December 24, 2009 at 12:36pm
Kokesh seeks donations of silver, gold for Congressional race

All politicians need money for their campaigns. But a congressional candidate from Santa Fe is asking supporters to give his campaign something he says is far more valuable than cash: gold and silver.

Doc Vega commented on Chris of the family Masters's blog post Game Over
"One of the reasons California is in drought mode, they rerouted a fresh water river into the ocean.…"
2 hours ago

This was recorded by Hunter on 1/18/19 & sent to his escort contact “Eva.” She had told him the…See More
6 hours ago
2 Comments 0 Favorites