Pope's key science advisor is atheist who believes in 'Gaia, not God

The scientist who influenced Laudato Si, and who serves at the Vatican's science office, seems to believe in Gaia, but not in God. 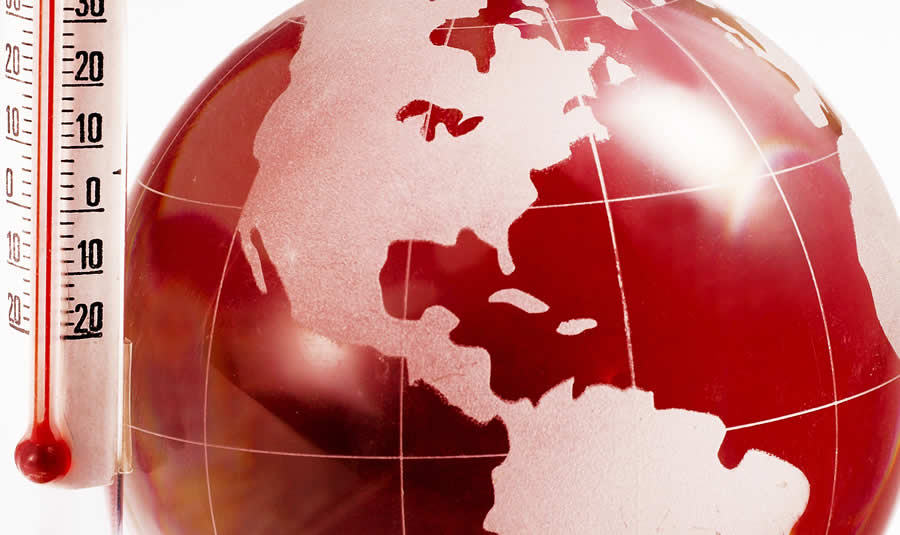 St. Francis of Assisi’s hymn Laudato Si’ spoke of “Brothers” Sun and Fire and “Sisters” Moon and Water, using these colorful phrases figuratively, as a way of praising God’s creation. These sentimental words so touched Pope Francis that he named his encyclical after this canticle (repeated in paragraph 87 of the Holy Father’s letter).

Neither Pope Francis nor St. Francis took the words literally, of course. Neither believed that fire was alive and could be talked to or reasoned with or, worse, worshiped. Strange, then, that a self-professed atheist and scientific advisor to the Vatican named Hans Schellnhuber appears to believe in a Mother Earth.

The Gaia Principle, first advanced by chemist James Lovelock (who has lately had second thoughts) and microbiologist Lynn Margulis in the 1970s, says that all life interacts with the Earth, and the Earth with all life, to form a giant self-regulating, living system.

This goes far beyond the fact that the Earth’s climate system has feedbacks, which are at the very center of the debate over climate change. In the Gaia Principle, Mother Earth is alive, and even, some think, aware in some ill-defined, mystical way. The Earth knows man and his activities and, frankly, isn’t too happy with him.

This is what we might call “scientific pantheism,” a kind that appeals to atheistic scientists. It is an updated version of the pagan belief that the universe itself is God, that the Earth is at least semi-divine — a real Brother Sun and Sister Water! Mother Earth is immanent in creation and not transcendent, like the Christian God.

What’s this have to do with Schellnhuber? In the 1999 Nature paper “‘Earth system’ analysis and the second Copernican revolution,” he said:

Ecosphere science is therefore coming of age, lending respectability to its romantic companion, Gaia theory, as pioneered by Lovelock and Margulis. This hotly debated ‘geophysiological’ approach to Earth-system analysis argues that the biosphere contributes in an almost cognizant way to self-regulating feedback mechanisms that have kept the Earth’s surface environment stable and habitable for life.

Geo-physiological, in case you missed it. Cognizant, in black and white. So dedicated is Schellnhuber to this belief that he says “the Gaia approach may even include the influence of biospheric activities on the Earth’s plate-tectonic processes.”  Not the other way around, mind you, where continental drift and earthquakes effects life, but where life effects earthquakes.

Although effects such as the glaciations may still be interpreted as over-reactions to small disturbances — a kind of cathartic geophysiological fever — the main events, resulting in accelerated maturation by shock treatment, indicate that Gaia faces a powerful antagonist. Rampino has proposed personifying this opposition as Shiva, the Hindu god of destruction.

Mother Earth gets the flu and instead of white blood cells and a rise in temperature to fend off the infection, it sends white ice and a decrease in temperatures. How? Geophysiologically! I remind the reader that our author, writing in one of the world’s most prominent science journals, does not use these propositions metaphorically. He proposes them as actual mechanisms.

Schellnhuber echoes the theme of a cognizant, i.e. self-aware, planet in another (co-authored) 2004 paper in Nature 2004, “Climbing the co-evolution ladder,” suggesting again that mankind is an infection, saying that mankind “perturbs … the global ‘metabolism'” of the planet.

Schellnhuber, a one-time quantum physicist who turned his attention to Mother Earth late in his career, was also co-author of a 2009 Proceedings of the National Academy of Sciences paper “Imprecise probability assessment of tipping points in the climate s...,” which asked select scientists their gut assessment about the arrival of various “tipping points.” Tipping points are a theme of Schellnhuber’s research (see inter alia this and this).

Tipping points are supposed moments when some doom which might have been avoided if some action had been taken, is no longer possible to avoid and will arrive no matter what. Tipping points have come and gone in climate forecasts for decades now. The promised dooms never arrive but the false prophets never quit.  Their intent is less to forecast than to induce something short of panic in order to plead for political intervention. When the old tipping point is past, theorists just change the date, issue new warnings and hope no one will notice.

One of the tipping points Schellnhuber asked about was the melting of the Greenland ice sheet, depending on what the temperature did. All of the selected experts (who answered the questions in 2004 and 2005) gave moderate (~15-25%) to quite high probabilities (50-80%) for this event to have occurred by 2015. The ice did not melt. 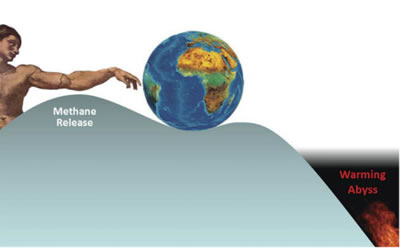 From a paper for the Pontifical Academy of Sciences by Hans Schellnhuber and Maria Martin, illustrating the idea of a methane tipping point. As a modification of Michelangelo’s iconic image from the Sistine Chapel, Earth replaces God, and Adam puts Earth at risk of descending into a fiery abyss.

Schellnhuber presented more tipping points to the Pontifical Academy of Sciences in 2014 in the co-authored paper, “Climate-System Tipping Points and Extreme Weather Events.” In that paper, Schellnhuber has a “scientific” graph with Michelangelo’s Sistine Chapel Adam “flicking” a planet earth over a methane tipping point, such that the earth would roll down into a fiery pit labeled the “Warming Abyss.” Hell on earth.

The Problem of People

Schellnhuber is most famous for predicting that the “carrying capacity” of the earth is “below” 1 billion people. When confronted with this, he called those who quoted him “liars.” But he then repeated the same claim, saying, “All I said was that if we had unlimited global warming of eight degrees warming, maybe the carrying capacity of the earth would go down to just 1 billion, and then the discussion would be settled.”  And he has often said that this temperature tipping point would be reached — unless “actions” were taken.

The man is suspicious of people. In that same interview he said, “If you want to reduce human population, there are wonderful means: Improve the education of girls and young women.” Since young women already know where babies come from, and since this knowledge tends neither to increase nor decrease population, the “education” he has in mind must be facts about how to avoid the consequences of sex. Austin Ruse discovered a 2009 talk in which Schellnhuber said the earth “will explode” due to resource depletion once the population reaches 9 billion, a number that the UN projects in 2050. Presumably he wants earth to avoid that fate, so he mustsupport the population control that Pope Francis so clearly repudiated in his encyclical.

Confirmation bias happens when a scientist manipulates an experiment so that he gets the outcome he hoped he would get. When Schellnhuber invites only believers in tipping-points-of-doom to characterize their guesses of this doom, his view that the doom is real will be confirmed. And when he publishes a paper that says, “Scientists say world is doomed” the public and politicians believe it. Scientists skeptical of the doom are dismissedbecause they are skeptics. This isn’t good science. It’s really bad religion, and a pagan one at that.

Global warming research is characterized by an insider’s club. If you believe, you’re in. If you doubt, you’re out. This is also so at the Pontifical Academies of Science where Schellnhuber was appointed by Bishop Marcelo Sanchez Sorondo. The bishop locked scientists with contrary views out of the process, scientists he has repeatedly dismissed as “funded by the oil industry.” Given this, how likely is it that the Holy Father was fully aware of the views of the chief scientist who advised him?