TSA Threatens To Cancel All Flights Out Of Texas If ‘Groping Bill’ ...

On Tuesday, the bill was set to be voted on in the Senate. This called for more of a response than a simple blog post. Federal government officials descended on the Capitol to hand out a letter (embedded below) from the Texas U.S. Attorney letting senators know that if they passed the bill, the TSA would probably have to cancel all flights out of Texas. As much as they love their state, the idea of shutting down airports and trapping people in Texas was scary enough to get legislators to reconsider their support for the groping bill…

"ALL YOUR CROTCHES ARE BELONG TO US!!!" -- The Tourism Suppression Agency

Setting aside that yet another "we guarantee your safety" TSA agent has been arrested for looting luggage, I would like to make a comment here.

A caller into my talk radio show reported that part of the application process for obtaining a job feeling up wives and daughters at the airports is an IQ test that one must FLUNK to be considered for hiring. I wasn't sure that was true, but it may well be so because the TSA seems oblivious to that is really going on here.

Barack Obama is headed into a rough 2012 re-election season. He cannot run on the economy. He cannot run on the wars. After a week of groveling before Israel, Obama cannot run on foreign policy. He cannot run on his handling of the Gulf Oil disaster. He cannot run on care and maintenance of our national infrastructure. Obama's attempt to play for sympathy over the birth certificate has cratered and most of the world knows the claim to have gotten Bin Laden May 1 was a total public relations hoax. What is a power-mad megalomaniac going to do to make himself look like a swell Joe to the American voters?

He's going to dump the TSA.

I mean, think about it. Michael Chertoff and his buddies have already made their fortunes with this scam. The TSA are totally useless and have never actually caught a single terrorist. Worse, the US Government is looking at a flood of lawsuits from TSA workers as they start to die from cancer from those scanners the US Government insists are safe, just as shoe store salesmen in the 1950s died of cancer from shoe store fluoroscopes the US Government insisted were safe. The TSA has utterly failed to transform the American people into sheep as planned, as was demonstrated last Thanksgiving when the TSA had to back down in the face of a near revolution at the hands of the enraged American people. Government Think Tanks hopefully understand that a riot starting at the airport security gates will likely not stop there. The revolution in Romania began at a sporting venue and did not stop until the machine-gunning of Ceausescu on Romanian National TV. Far from being an asset to repress the American people, the TSA has become a severe liability as a potential sparking point for violent revolution.

So why is TSA being encouraged to be total jerks?

Because they are all Obama's sacrificial lamp to get re-elected!

That's right TSA, go on glorying in the power to shove your hands down the pants of America, because you are being set up to get thrown under a bus when Obama decides he needs to disband the TSA in a desperate attempt to win his second term.

You think he won't do it?

And consider this. After the TSA is gone and you don't have those Nazi-uniforms and rubber gloves to hide behind, do you think anyone is going to give you another job when you have "TSA" on your resume?

Welcome to the ranks of the unemployed and homeless, losers. You are being played!

Permalink Reply by TheLasersShadow on May 25, 2011 at 2:11pm
Texans NEED to go out and make their voices heard!! NOW!! If your with in an hour of Austin TX you don't have an excuse, go down there!

I don't know who wrote this piece but Its right on the mark.

Now the question is are the sheeple going to be fooled by Obama when he does, and he will, dump the TSA to make the sheeple happy enough and elect a second time a no good fool of a president for a second term?

I hope his stratagy fails but the next president will surely bring back the TSA even bigger and...ug better then before.

I am convinced that the TSA has a second secret agenda,, one that does not get aired by the media at all..

Look at this simple image and,,, maybe the little girl has it right...,

and if you think this photo is about Pornogaphy, your sicker in the head than Presiden Obama is. 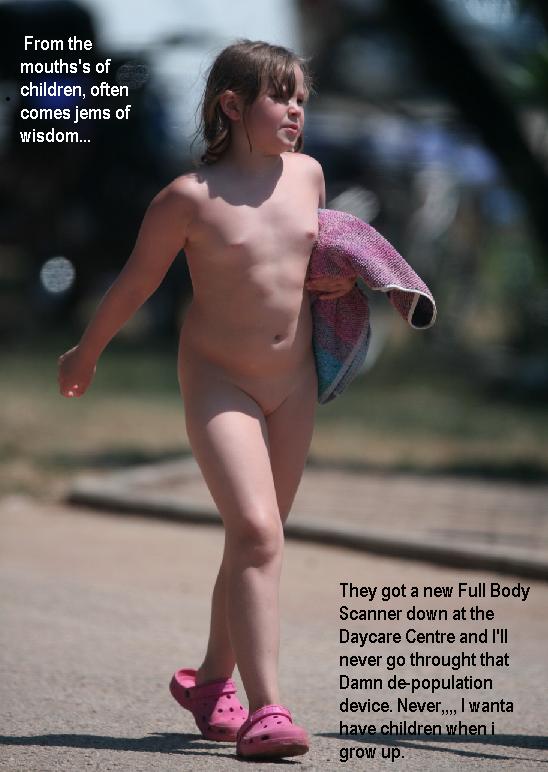 Doc Vega commented on Gary McCurry's blog post Case That Could Overturn 2020 Election To Be Reviewed By Supreme Court
"Gary McCurry yes he is a trator not to mention being a butt pirate! "
5 hours ago

"Strange they'll bring this in after the Queen had passed on. Actually perhaps it's not…"
16 hours ago

The WEF plan for '15 minute cities' is already rolling out to keep you from driving and leaving a certain radius. Now cities in England and launching these n...
17 hours ago
1 Comment 0 Favorites