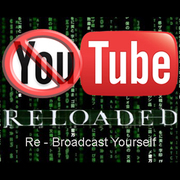 Welcome to 12.160Mhz, I hope to see you add some more videos from your dailymotion :)

Comment by Russell S.Wyllie on October 17, 2009 at 10:56am
My 3-year-running channel 'PoliticalVideos' at Youtube was removed in February 2009 after copyright infringements. A couple of my vids were claimed by a U.S-based Youtube group although they were British broadcasts. Youtube informed me to settle the claims before re-instating my channel, so I pointed out that I had used British material and the videos were re-instated, yet the channel itself has not been, despite settling the wrongful video claims.

I contacted Youtube on various occasions, yet nobody has got back to me. The Youtube admin have deliberately ignored my rightful channel, and have removed various other channels I used to subscribe to.

Political or private-parties have paid-off Youtube???
I call it shenanigans...

Comment by Fred Black on October 8, 2009 at 7:40am
BIG BIRD Calls Out Michelle Obama On Barack's BIRTH CERTIFICATE & PLACE OF BIRTH!! Re-Loaded

Comment by Fred Black on October 7, 2009 at 9:16am
Maguire Security Harass Photographers: Re-Loaded

Comment by Mark on October 2, 2009 at 4:14pm
Use Youtube for the masses, but if you want your videos to stay live, use Veracity Videos. We average 1000 unique visitors a day, and a lot of traffic comes from Facebook, Bing, and Google Search.

Comment by Tula on October 2, 2009 at 1:22pm
Great James... Can you give Jason Bermas the teleophone number of the CEO of the Crow Tribe?

Comment by Fred Black on October 2, 2009 at 12:14pm
Wow, cool Tula. I just did a search, is this the one? http://www.youtube.com/user/WhoIsLeonardPeltier

"Thanks Chris, my landlines hard wired in, so no batteries, or power required, excellent for…"
7 hours ago

"Good reasoning angle. No landline for me. It's Dects system. Worst than mobile/cell phone"
8 hours ago

cheeki kea commented on Chris of the family Masters's blog post This is what US would look like under leftists
"Don't sign CS, I got a geek to show me the video so no joining needed. It's worth…"
9 hours ago

Central Scrutinizer commented on Chris of the family Masters's blog post This is what US would look like under leftists
"damn, not on the Fecebook so it's unavailable to me....unless I sign up righhhhhhhhht...…"
10 hours ago

"that cannon dick got shit-canned today w00t!!"
10 hours ago

JoeG favorited Phyllis Maka's blog post The UN has been unsuccessfully attempting, for over 60 years, to bring about what it has been mandated to do by the Vatican.
10 hours ago

"Oops too late. Think what you said before you say it."
13 hours ago

Chris of the family Masters commented on Phyllis Maka's blog post Pharmacist Exposes a ‘Horrific Future’ Based on Her Recent Board of Pharmacy Practice Updates
"This woman is a hero. She's standing for the truth and the hardest thing to comprehend -…"
20 hours ago