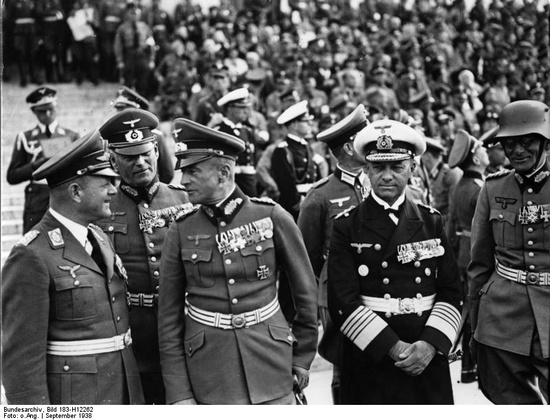 Thousands of men of Jewish descent and hundreds of what the Nazis called 'full Jews' served in the German military with Adolf Hitler's knowledge and approval.

Hi Herta, I just clicked on the link in your comment and this is what it showed. Are you sure you copied the right link?

A Leading Representative Of Holocaust Survivors In Spain Has Admitt...

A leading representative of Holocaust survivors in Spain has admitted to being "an impostor".
Enric Marco told Spanish TV he was never held in the Nazi concentration camp of Flossenburg as he had claimed for nearly 30 years.

Mr Marco, 84, was head of the Amical de Mauthausen group, named after the camp in Austria where the Nazis held most of their Spanish political prisoners.

His lies were discovered by a historian researching his story.

Mr Marco admitted: "I wasn't in a concentration camp. I was held in captivity and the Nazis did impose penalties on me. But that does not exonerate me from being an impostor."

Six of the alleged scam artists worked for the Conference on Jewish Material Claims Against Germany and helped orchestrate 5,500 bogus applications over 16 years. prosecutors charged.

"If ever there was a cause that you would hope and expect would be immune from base greed and criminal fraud, it would be the Claims Conference," said Manhattan U.S. Attorney Preet Bharara.

The conference administers funds to those who fled Nazi persecution or survived concentration camps. Among those charged was Semyon Domnitser, a former director of the conference who was fired last February.

In some cases the recipients were born after World War II and at least one person was not even Jewish. When a phony applicant got a check, the scammers were given a cut, Bharara said.

Eleven years after the publication of her best-selling Holocaust memoir - a heartwarming tale of a small Jewish girl trekking across Europe and living with wolves - the Massachusetts author yesterday admitted the whole story was a hoax.

In a statement issued by her Belgian lawyer, Misha Defonseca of Dudley, whose book, "Misha: A Memoire of the Holocaust Years," has been translated into 18 languages and is the basis for a new French movie, "Survivre avec les Loups" ("Surviving With the Wolves"), confessed that she is not Jewish and that she spent the war safely in Brussels.

The 1997 book was the center of a multimillion-dollar legal battle pitting Defonseca and her coauthor, Vera Lee of Newton, against publisher Jane Daniel of Gloucester. The book was a bestseller in Europe and Canada, and attracted attention from Walt Disney Co. and Oprah Winfrey, but it sold few copies in the United States, largely because the marketing stopped after the authors sued.

OMG! I learned about tnis very same thing about 5 yrs ago. I was so freaked out. Learned also about the Ashkenazis and started to wonder about who the real nazis were. I'm also wondering about Hitler himself, if he was really as evil as "they" want us to believe, considering how artistically inclined he was, and don't forget the Versailles treaty, and how so much was taken away from Germany for reparations from ww1, where Germany was blamed for something the money changers were behind. Then i learned about David Irving and read some of the stuff he had researched, and learned about the lies about Auschwitz. Its really crazy w true it is that the winners write history, except they didnt really win if they cheated

On December 17, 1862, General Ulysses Grant wrote to the Assistant Adjutant General of the US Army:
"I have long since believed that in spite of all the vigilance that can be infused into post commanders, the specie regulations of the Treasury Department have been violated, and that mostly by the Jews and other unprincipled traders. So well satisfied have I been of this that I instructed the commanding officer at Columbus to refuse all permits to Jews to come South, and I have frequently had them expelled from the department. But they come in with their carpet-sacks in spite of all that can be done to prevent it. The Jews seem to be a privileged class that can travel anywhere. They will land at any wood-yard on the river and make their way through the country. If not permitted to buy cotton themselves, they will act as agents for someone else, who will be at a military post with a Treasury permit to receive cotton and pay for it in Treasury notes which the Jew will buy at an agreed rate, paying gold."

General Orders No. 11 declared:
"1. The Jews, as a class, violating every regulation of trade established by the Treasury Department, are hereby expelled from the Department.

"2. Within 24 hours from the receipt of this order by Post Commanders, they will see that all of this class of people are furnished with passes required to leave, and anyone returning after such notification, will be arrested and held in confinement until an opportunity occurs of sending them out as prisoners, unless furnished with permits from these headquarters.

"3. No permits will be given these people to visit headquarters for the purpose of making personal application for trade permits.

"By order of Major Gen. Grant.

Indeed, there are Jews that are anti-Israel due to its Zionist takeover and they too are persecuted within Israel and everywhere else by the Zionist Jews. Jews belonging to the Nutrei Karta are the example of such Jews that condemn Israel and all those that support it in the name of Judaism.

I also agree it's ridiculous to hate people based on their faith. However, it is their ideology that is a concern and if that wasn't the case, think about it, why would they have been ousted from 109 countries throughput history? Was every country simply biased against them for no reason?

MARTIN LUTHER, Table Talk of Martin Luther, translated by William Hazlet, page 43
"But the Jews are so hardened that they listen to nothing; though overcome by testimonies they yield not an inch. It is a pernicious race, oppressing all men by their usury and rapine. If they give a prince or magistrate a thousand florins, they extort twenty thousand from the subjects in payment. We must ever keep on guard against them."

REV. WILLIAM S. MITCHELL of Philadelphia, quoted in Count Cherep-Spiridovich'sbook The Secret World Government, page 194
"If there is an ingrate in history, it is the Jew. In this land which befriended him he as conspired, plotted, undermined, prostituted and corrupted and (hiding to this hour behind the braver screen of other folks), dares to contrive and scheme the death of every Christian principle which has protected him."

ST. JUSTIN, martyr stated in 116 A. D.
"The Jews were behind all the persecutions of the Christians. They wandered through the country everywhere hating and undermining the Christian faith."

H. H. BEAMISH, in New York Speech, October 30, 1937
"The Boer War occurred 37 years ago. Boer means farmer. Many criticized a great power like Britain for trying to wipe out the Boers. Upon making inquiry, I found all the gold and diamond mines of South Africa were owned by Jews; that Rothschild controlled gold; Samuels controlled silver, Baum controlled other mining, and Moses controlled base metals. Anything these people touch they inevitably pollute."

W. HUGHES, Premier of Australia, Saturday Evening Post, June 19, 1919
"The Montefiores have taken Australia for their own, and there is not a gold field or a sheep run from Tasmania to New South Wales that does not pay them a heavy tribute. They are the real owners of the antipodean continent. What is the good of our being a wealthy nation, if the wealth is all in the hands of German Jews?"

Opposition to the Jews did not begin in Germany but dates back before the birth of Christ over 2,000 years ago! Researching writings of world's greatest men throughout history and one will know why the "wandering Jews" have made enemies out of every host country that ever accepted them.

What has been said/written about the Jews by the world's greatest men who wrote History and are revered even to this day?

CICERO (Marcus Tullius Cicero). First century B.C. Roman statesman, writer.
"Softly! Softly! I want none but the judges to hear me. The Jews have already gotten me into a fine mess, as they have many other gentleman. I have no desire to furnish further grist for their mills." (Oration in Defense of Flaccus)

Cicero was serving as defense counsel at the trial of Flaccus, a Roman official who interfered with Jewish gold shipments to their international headquarters (then, as now) in Jerusalem. Cicero himself certainly was not a nobody, and for one of this stature to have to "speak softly" shows that he was in the presence of a dangerously powerful sphere of influence.

And, on another occasion Cicero wrote:
"The Jews belong to a dark and repulsive force. One knows how numerous this clique is, how they stick together and what power they exercise through their unions. They are a nation of rascals and deceivers."

SENECA (Lucius Annaeus Seneca). First century Roman philosopher:
"The customs of that most criminal nation have gained such strength that they have now been received in all lands. The conquered have given laws to the conquerors." (De Superstitione)

DIO CASSIUS. Second century Roman historian. [Describing the savage Jewish uprising against the Roman empire that has been acknowledged as the turning point downward in the course of that great state-form]
"The Jews were destroying both Greeks and Romans. They ate the flesh of their victims, made belts for themselves out of their entrails, and daubed themselves with their blood... In all, 220,000 men perished in Cyrene and 240,000 in Cyprus, and for this reason no Jew may set foot in Cyprus today." (Roman History)

DIODORUS SICULUS. First century Greek historian. Observed that Jews treated other people as enemies and inferiors.
"Usury" is the practice of lending money at excessive interest rates. This has for centuries caused great misery and poverty for Gentiles. It has brought strong condemnation of the Jews!

BERNARDINO OF FELTRO. 15th century Italian priest. A mild man who extolled patience and charity in normal circumstances, he described himself as a "barking dog" when dealing with Jews:
"Jewish usurers bleed the poor to death and grow fat on their substance, and I who live on alms, who feed on the bread of the poor, shall I then be mute before outraged charity? Dogs bark to protect those who feed them, and I, who am feed by the poor, shall I see them robbed of what belongs to them and keep silent?" (E. Flornoy, Le Bienbeureux Bernardin the Feltre)

AQUINAS, THOMAS, Saint. 13th century scholastic philosopher. In his"On the Governance of the Jews," he wrote:
"The Jews should not be allowed to keep what they have obtained from others by usury; it were best that they were compelled to worked so that they could earn their living instead of doing nothing but becoming avaricious."

"The hive mindset also is part of this I would imagine..."
3 hours ago

"And now they want to add the covid jab. "
3 hours ago

"Have you seen the autistic explosion numbers, it's now like 1 in 25 children are brain burnt…"
3 hours ago

"Steve - Thinking about that, killing them is probably the most humane thing to do."
4 hours ago

"Have you heard what these sick pukes do to DEclawed  gerbils/hamsters ,filth nothing but…"
4 hours ago

"The Dark fears the Light."
5 hours ago

"We as a nation have been the BAD GUYS FOR A LONG TIME, murder and steal has been our M O since at…"
5 hours ago