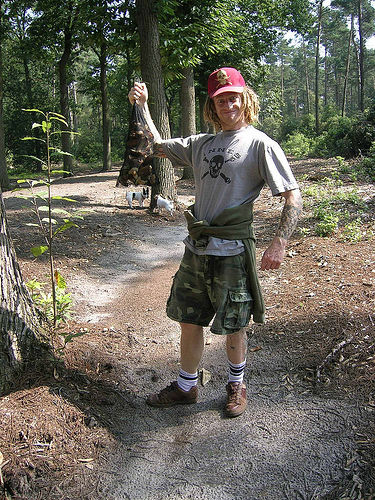 I’ve been in law enforcement for the past 18 years. I have attended a variety of training over those years. During the 1990s, most training I attended was community-oriented, sponsored by local agencies or private companies specializing in police training. Themes common to training of the past included topics such as Constitutional rights, community partnerships, youth-oriented programs and problem-oriented… Continue

With Gov. Gary Herbert’s signature on March 25, the state of Utah became the first in recent times to officially accept gold and silver coins as legal tender at their true value, prompting praise from sound-money advocates warning about the future of the Federal Reserve System and its fiat money.

The "Utah Legal Tender Act," as the… Continue

Transhumanism: The New Face of Eugenics Recognizing both the fact that "all politics are local", and the international readership of SurvivalBlog, I naturally de-emphasize politics in my blog. However, a recent article got my blood boiling: Motorists illegally detained at Florida tolls - for using large bills! So, not only are Federal Reserve Notes not redeemable "on demand" for specie, but effectively they are now no longer "...legal tender for all debts public… Continue

NEWPORT, Ore. – While the U.S. Department of Energy said in public statements that there are “no significant quantities of radiological material” deposited on West coast beaches, U.N. Secretary-General Ban Ki-moon said it was time to reassess the international atomic safety regime; meanwhile, there’s growing fears here in Newport and other West coast fishing communities that Japan’s radiation will spread from its coast to… Continue

HAARP is a project of which the public is almost completely unaware, and this needs to be remedied.”Toronto, Canada – [ZNN] The daily lives of people seem blissfully unaffected by events about which they know little or nothing. Daily news reports unfold with no mention as to why and how the powerful operate behind the scenes. We pay our mortgages, book our vacations and school our children, as a corporate and government… Continue

For the past month, Hawaii State Senator Sam Slom, the only Republican in the Hawaiian State Senate, has been trying to get answers from Kapi'olani Medical Center executives as to why the hospital has chosen to put under lock and key a letter from the White House that the hospital should have been proud to receive and display publicly.…

Obama: NO U.S. Forces On Ground In Libya-Except For 2200 Marines

NPR: “President Obama said Wednesday it was ‘absolutely’ out of the question that U.S. ground forces would be used in Libya.”

How would the president describe the 26th Marine Expeditionary Unit? There is no such thing as a purely air-based combat mission; planes have problems and pilots end up on the ground, and then U.S. forces have… Continue

Japan’s damaged nuclear plant in Fukushima has been emitting radioactive iodine and caesium at levels approaching those seen in the aftermath of the Chernobyl accident in 1986. Austrian researchers have used a worldwide network of radiation detectors – designed to spot clandestine nuclear bomb tests – to show that iodine-131 is being released at daily levels 73 per cent of those seen after the 1986 disaster. The daily… Continue

The Enemy of my Enemy is NOT my Friend

As with the BP Gulf Oil Spill independent scientists are finally stepping forward with research and analysis refuting government propaganda downplaying and minimizing the true scope of the disaster. For example in my last post I wrote about an article on New Scientist, Japan Radioactive Fallout Hits 73% of Chernobyl levels.

Radioactive Iodine In Fukushima Seawater Highest Ever, Reactors 5 And 6 Now Leaking Too

And while futures rise as the market anticipates the latest central bank intervention to paper over the global financial insolvency, the radioactive fallout from Fukushima continues to worsen as Iodine 131 levels in the seawater hits the highest since the start of the crisis. "According to Tokyo Electric Power Co., radioactive iodine-131 146.9 times higher than the legal concentration limit was detected Wednesday morning… Continue

The United States is the biggest funder of a U.N. program that helps countries to develop civilian nuclear technologies. Despite “dual-use” proliferation concerns, the program’s beneficiaries include Iran and Syria.

The Government Accountability Office has for years recommended that the U.S. government, as a result of those… Continue

I wasn't even looking for this. I just went to the ISAF website to see whether the grossly underreported weekend murders of two American soldiers (and shootings of four others) by an Afghan security contractor -- again -- was considered newsy enough to post by the official powers that be. "The slayings bring to nine the number of U.S. soldiers who have been killed by rogue Afghan security force members, whether uniformed… Continue

Four branches of the military have begun sending training material to 2.2 million active and reserve troops as a prelude to opening the ranks to gays, with instructions on, for example, what to do if an officer sees two male Marines kissing in a shopping mall.

Key themes are that sexual orientation will no longer be a bar to service,… Continue