We were told for months we’d never gather in public again ‘because Covid-19.’ Where do the week's riots leave ‘social distancing'? Helen Buyniski is an American journalist and political commentator …

We were told for months we’d never gather in public again ‘because Covid-19.’ Where do the week's riots leave ‘social distancing'? 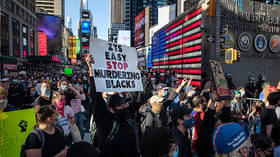 Black Lives Matter protesters kneel in Times Square during a march to honor George Floyd in Midtown Manhattan on May 31, 2020 in New York City. © Getty Images / John Moore
The same people who convinced Americans to lock themselves inside for months for fear of a killer virus have forsaken Covid-19 to urge us all to join nationwide protests. If anyone took them seriously before, those days are over.

Media, politicians and celebrities who spent the past three months lecturing Americans about the importance of staying home and keeping at least six feet away from all other humans lest they catch or spread the deadly coronavirus have suddenly pivoted on a dime – seemingly as one – to cheering on those Americans defying their advice to pour into the streets and join nationwide protests against police brutality.

Wall-to-wall Covid-19 coverage gave way overnight to endless footage of police whaling on protesters, rioters burning buildings and looting, and massive crowds in the streets of every major American city. Nary a word was spoken about social distancing, or lockdowns, or anything relating to the “new normal” we’d been ordered for months to understand was our only future.

ALSO ON RT.COM‘Who’s NECKst?’ Hundreds rally in London & Berlin to support protests in US over George Floyd’s death (VIDEOS)


Americans who’d spent months worried that their furtive trips to the supermarket would land them in the morgue were suddenly told to get out there and fight the power. News media, politicians, and seemingly every major corporation was suddenly pumping out messages of support for the protests, which were said to be happening not only all over the US, but all over the world. What happened to “Stay Home Or Die Trying”?

Sure, more and more information was emerging to suggest that the entire lockdown-shutdown response to the virus had been suicidally misinformed at best, based on a high-school student’s science project reviled by real experts – and nothing excites (and distracts) the American public like a good old-fashioned race war. 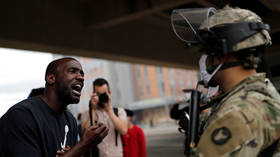 As Minnesota burns, media fans flames of race war... and everyone forgets about Covid-19

But where does that leave the people who dutifully shut down their businesses, eating seven-figure losses and forfeiting their savings because they trusted the word of their leaders and the media, who told them this was the only way to save their fellow Americans from suffocating to death in the grips of this new plague? What about those who were laid off or “indefinitely” furloughed because their employers saw no future for themselves in a socially distanced world?

These people are no doubt staring open-mouthed at the footage of thousands of protesters packing the streets of most major American cities, no sign of a six-foot distance between them, many masked but otherwise giving no indication that the past three months were anything but a bad dream.

It’s not like the media and political class haven’t lied to Americans before – they do it on a daily basis, so much so that we might start to get uneasy if they stopped. But there has always been an unspoken agreement that, in matters of life and death, like the killer world-ending pandemic Covid-19 was initially presented to be, they’d put aside the usual partisan bickering and ratings tug-of-war and tell us what we needed to do in order to stay alive. That trust convinced many to suppress their survival instincts and close down their lives for three months, believing the authorities knew what was best.

Now they’re getting the exact opposite message from a media-political nexus that seems bent on destroying every last shred of credibility it once had.

Americans sacrificed three months of their lives because they were told it was the only way to save their neighbors’. Now they’re being made to feel like fools as the same talking heads lecturing them about the critical importance of staying home a month ago are now telling them to get into the streets because racism is tearing their country apart.

What will regular Americans think?

I shuttered my dream business, my life 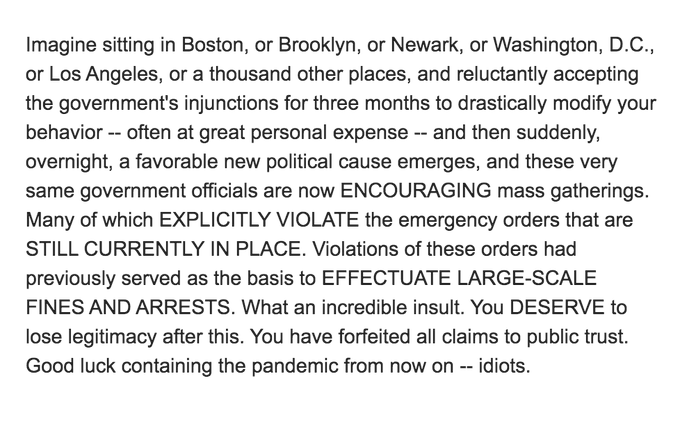 1,202 people are talking about this

It’s not clear how the narrative-managers can salvage any credibility from this journalistic equivalent of a self-handicapping gunshot wound to the foot, or even if they want to. They might hope fear of looters and race war can keep Americans in the same unquestioningly obedient state they were largely able to maintain throughout the pandemic, content to camp out in front of their screens because the outside world is a terrifying, uncertain place.

Perhaps they’re counting on a brief respite from all-coronavirus-all-the-time will give people’s brains time to recharge their stock of stress hormones, allowing for maximum fear to be unleashed once the dreaded “second wave” of Covid-19 hits in the fall (something health officials still say is possible). Or maybe they’re just planning to rely on good old learned helplessness – the “what choice do we have but to trust our leaders?” fatalism that settled over this country during the last economic crisis (speaking of looting…) and never really left.

ALSO ON RT.COMRussia’s to blame? MSM allegations that Moscow had a hand in US anti-police-brutality riots ‘entirely to be expected’


But one thing seems certain. If they don’t even make an effort to explain what happened to the “new normal” socially distanced dystopia we were told was inevitable just two weeks ago, and just pretend the lockdown never happened, we can expect howls of outrage from the millions of people who realize they’ve been betrayed by their leaders like never before – rage that will make the current unrest look quite tame.

Sure, they could simply admit they overhyped the pandemic, even apologize to the people whose lives they ruined with the shutdowns, and try to make amends that way. But that’s not their style.

Indeed, just about the only way the political class and their media enablers could further tank their credibility would be to blame that Covid-19 “second wave” on those “wildly irresponsible anti-police-brutality protests” everyone was somehow convinced to join in June. Wanna bet that’s the route they take?

Freedomrox commented on Phyllis Maka's blog post SHEEP MENTALITY !
"Way ahead of you…"
8 hours ago

In this video I start off slow but pick up steam as I submit the evidence and examples. By comparing our situation to the study of torture & coercion on Pris...
9 hours ago
0 Comments 0 Favorites

"Rockefeller scam medicine and Fauci has proudly stated that he is trained Jesuit.  That should…"
9 hours ago

Mr. Sizzle replied to steve's discussion Introducing the negro power militia. SO SAD IT'S COMICAL
"They have no idea how easy it would be for us and the powerful amount of patience we are allowing…"
9 hours ago

Phyllis Maka commented on Phyllis Maka's blog post SHEEP MENTALITY !
"Consciousness - Light - the higher frequency energy so much lighter than these lower energies being…"
10 hours ago

Freedomrox commented on Phyllis Maka's blog post SHEEP MENTALITY !
"Phyllis, I agree that all things are energy within an Electric universe, but will need to work…"
10 hours ago

steve commented on Chris of the family Masters's blog post Estonian Political Leader Wants to Legalize “Holocaust” Denial
"Only LIES need made up laws to protect them and keep them hidden in the dark. The TRUTH loves the…"
13 hours ago

Phyllis Maka commented on Phyllis Maka's blog post SHEEP MENTALITY !
"Gaia, in earth form, a living soul is clearing out and releasing these heavy dense energies from…"
13 hours ago