It seems quite transparent what the agenda is for Washington DC Mayor Muriel Bowser.  After giving the DC police orders to stand down; and after ending the previously declared state of emergency; and after cancelling the flow-through purchase contract where feds repay the city for national guard housing; she is now demanding that all national guard troops and security elements leave the nation’s capital city:

…”It’s our expectation that until soldiers are called home, we don’t think that soldiers should be in the nation’s capital patrolling or policing streets. We’ve made that formal request to the White House.”… (link)

Simultaneous to her demand that all security forces, including the added DC police, be withdrawn operations, the Mayor is helping to organize the introduction of far-left mobs under the pretense of her facilitating weekend mass protests against the White House.

In essence, Mayor Bowser is simultaneously removing DC security and introducing an extremist force.  This is beyond dangerous and appears to be an intentional effort by the mayor to force  and create a violent Kent State type confrontation.  This is Alinsky 101.

Provocation to a specifically designed conflict is why Mayor Bowser had the streets painted earlier today; and why she is pretending not to know what the end goal is for the operation where she is a key player.

D.C. Metropolitan Police said the event “may be one of the largest we’ve had in the city.”

Calls for action shared on Twitter, including one by a group called Refuse Fascism, say demonstrators will meet outside Lafayette Park.

[…] Trump was scheduled to fly to his Bedminster, New Jersey, golf club, but the trip was canceled. “The president’s looking forward to another working weekend,” a senior administration official told Politico. (more)

Let’s hope President Trump hasn’t been set up again by resistance operatives within the White House.

New Jersey @GovMurphy: I request that you remove your National Guard from our city. They were brought to the District without my knowledge and request.

I appreciate your service, but your presence encroaches on the rights of 705,000 tax-paying residents. 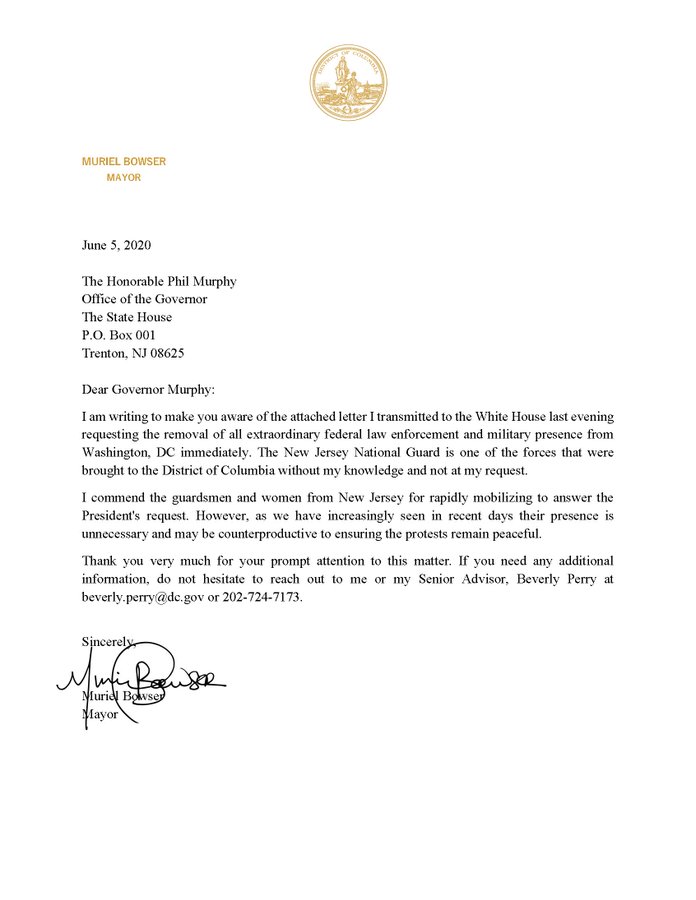 Ohio @GovMikeDeWine: I request that the Ohio National Guard be removed from the District. Without my knowledge and request, they were brought to our streets.

While I appreciate your service, we ask that you respect the right to self-governance of 705,000 tax-paying Americans. 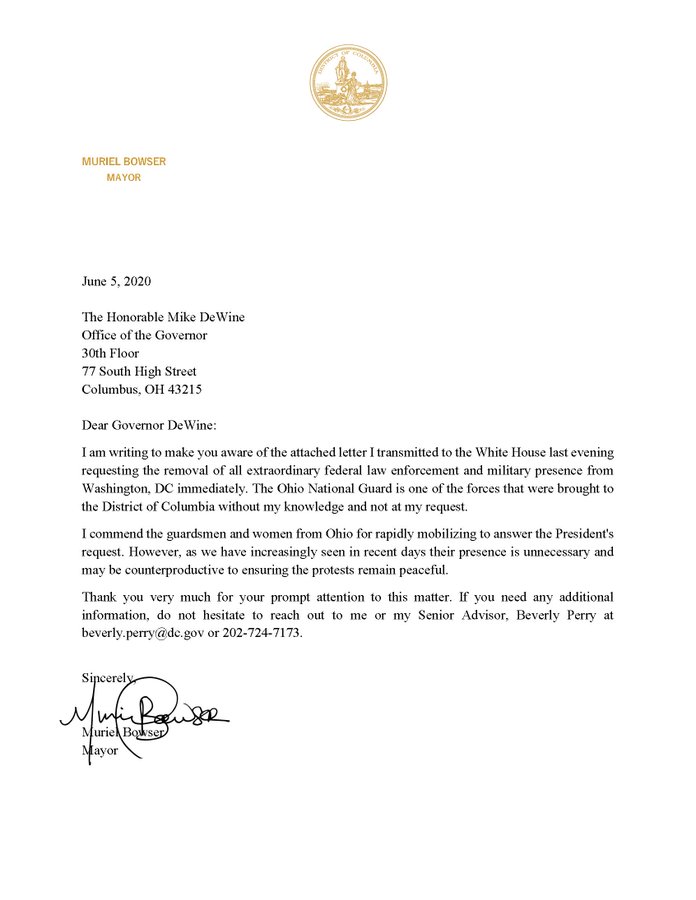 2,512 people are talking about this

Comment by Guardian of Scotland on June 6, 2020 at 9:54am
This woman is only a mayor. The United States Congress and the President of the United States have all authority in the District of Columbia. President Trump can over rule any edict from her office by executive order. Besides he does not need the D.C. National Guard. He has the 82nd Airborne immediate action force and The 278th armored cavalry regiment from Knoxville, The Tennessee Cavalry.