Egyptian People want the Muslim Brotherhood and Morsi and Patterson Evicted from Egypt!

This was an AMAZING sight today in Cairo. Military helicopters with Egyptian flags flew over Tahrir Square showing their support for the massive anti-Morsi crowd. Middle East expert Walid Phares says these are the true Arab Spring protests we are witnessing. Phares said nearly 20 million protested against Morsi on Sunday compared to 2 million who protested Mubarak in 2011. The Obama administration supports the Muslim Brotherhood Morsi regime... 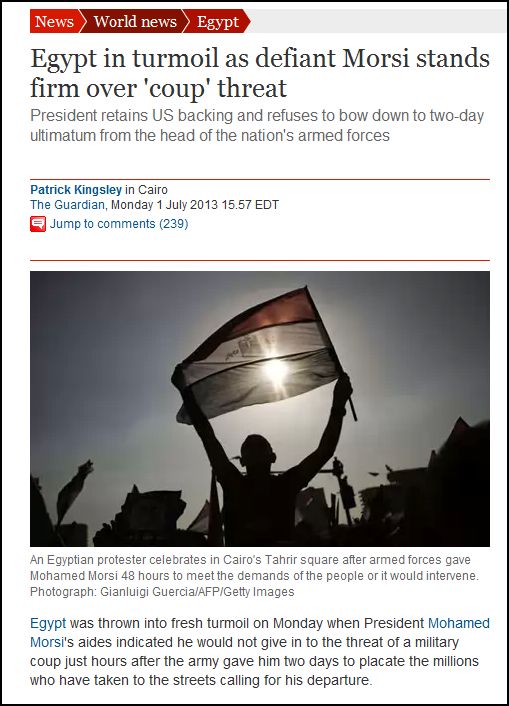 Egyptians words today: Here you are the new, the president saw the warning from the army as a military coup, so this betrayer asked Mrs Patterson to make Obama do something, his assistant said to the Guardian that the president will never leave the power despite the millions of protestors in the streets because USA support him, the assistant call United States to intervene and prevent the army from the coup in any way !!!!! Did you understand now why people here have negative feelings against USA ? They feel that USA prevent Egypt to be a democratic and modern country, and want Egypt to have always conflicts and never can stand up or going forward.
Also today this terrorism party muslims brotherhood call all the supporters to the president (they all are militant Islamists) to demonstrate tomorrow in every where in Egypt to support the president, they threatened if Moursi fall so they will convert Egypt to Islamic country.!!! I will ask you again my friend, did you understand why people here against USA? they think that USA want to convert Egypt ( the oldest civilized country in the history) to another Afghanistan.

The army commented on all that, the army announced to the media that he will face any violence in the streets with the utmost force, he repeat that again and said that the army will never allow to be blood or killing in the street between the same civilians.

The army forces now in everywhere in Egypt's cities, you can see while walking the tanks, armored cars and a very large number of army soldiers in the streets, they said in media they are in the streets for the security and to protect the protesters in demonstration, but it seems they prepare and ready to a combat or a battle.

Thanks my friend, I wish I could make all Americans people to know the policies of their leaders in Egypt, how their leaders insulting American citizens around the world by make people have a negative idea about America and Americans because of their policies which cares only about Israel no matter the stable or the secure of Egypt, even if Egyptians killed each other.

All my love and respect to the USA as a free country and to all great American people, but not for these leaders who serve zionism and the zionists in very sincerely. !!!

I feel that we will watch a very hard times this next hours, I'll tell you the latest update, moment by moment.

Link to happenings of yesterday http://fightingforliberty.ning.com/profiles/blogs/this-is-what-is-h...

"note all of the military ambulances!"
48 minutes ago

Larry Flinchpaugh commented on Larry Flinchpaugh's blog post Troop Deployment in DC and the states
"It looks like Trump is not going to declare martial Law to drain the swamp.  At least his…"
1 hour ago

Central Scrutinizer replied to MAC's discussion Just a little private talk hear amongst our selves.
"Exactly 24 hours left as President , I'd say now be a good time for any hidden "Power…"
1 hour ago

Larry Flinchpaugh commented on Larry Flinchpaugh's blog post Troop Deployment in DC and the states
"It doesn't look like Trump will initiate Martial Law.  Maybe the Republicans can gain…"
1 hour ago

HOLD UP...IF JOEY IS IN POWER IN 2 DAYS, WHY DID NANCY DO THIS TODAY?

"Bless roorol America!!! ;) Need a couple dozen more of these types all up in da house"
2 hours ago

HOLD UP...IF JOEY IS IN POWER IN 2 DAYS, WHY DID NANCY DO THIS TODAY?

Over 50,000 Restaurants in Italy Declare “I Am Open” Defying Lockdown Measures

Twilight Zone commented on Central Scrutinizer's blog post BIDEN TO DEPLOY FEMA, NATIONAL GUARD TO SET UP COVID VACCINE CLINICS ACROSS THE U.S.
"“We’ll help people understand what science tell us. That the vaccines help reduce the…"
3 hours ago

Doc Vega commented on Doc Vega's blog post Dividing America: Major Strategy of the Left
"Thanks for the favorite Twilight Zone."
3 hours ago