Flashback --- FBI: 9/11 Truthers Should Be Treated As Possible Terrorists

Update: We have also released an exclusive podcast transmission on these startling developments. You can listen and download the mp3 here.

In the last few weeks the FBI, in conjunction with the Department of Homeland Security and the Department of Justice, have sent out 25 flyers that label normal everyday activities as possible terrorist indicators.

These flyers also specifically target political speech and the belief that the CIA and others had a part in 9/11 in order to justify, among other things, multiple foreign wars.

That’s right, our government is teaching state and local law enforcement nationwide that 9/11 truthers should be immediately looked at as possible terrorists.

In an FBI, Bureau of Justice document on spotting potential sleeper cells within the United States it specifically states that someone may be a terrorist sleeper agent if they believe that the CIA had a hand in 9/11. (A fact that has been heavily documented by thousands of experts. Rogue elements does not mean the entire CIA)

Late last week Intel Hub contributing writer Madison Ruppert wrote an extensive article that highlighted the details of all the 25 flyers that were sent out.

The Federal Bureau of Investigation (FBI) has routinely released their “Communities Against Terrorism” advisories in the form of fliers which encourage the public to report suspicious activity, something which the DHS has heavily promoted under their “See Something, Say Something” citizen spying program.

Through releasing these fliers, the FBI has effectively made most activities possible indicators of terrorism. Many of these are so innocuous it is almost laughable to think of them as hints of terrorist activity.

These are intended to make the people of the United States live in a constant state of fear, constantly on the lookout for non-existent terrorists lurking behind every corner.

This also helps create a culture of citizen spying in which neighbors are reporting each other for what would otherwise never be considered noteworthy activities.

Thus, it makes it much easier for the government to track down supposed dissidents since just about everything they do is likely to be considered suspicious when applying all of the absurd guidelines promoted by the FBI.

Although all the supposed possible terrorists indicators are absolutely absurd, the fact that the FBI choose to specifically target 9/11 truthers shows how important, even after ten years, covering up the truth of the horrendous 9/11 attacks is to the powers that be.

In August 2011 a video report from media outlet Russia Today highlighted a bill introduced in Congress that would allow indefinite detention of any American that the government declares a terrorist or terrorists sympathizer. (which we now have with NDAA)

The report specifically spoke about the possibility of 9/11 truthers being locked up throughout the country and now, with an FBI flyer specifically stating this very thing, questioning 9/11 is becoming an increasingly dangerous use of free speech.

Meanwhile, the fact that the United States and Israel openly support and fund an al Qaeda affiliated terrorist group in Iran (MEK) is in the public domain yet everyday Americans are being labeled terrorists by the very officials who either indirectly or directly support terrorists themselves.

An article written by Tony Cartalucci on his Land Destroyer blog and syndicated on The Intel Hub outlined the documented facts that show that high levels US politicians and the Israeli government openly endorse and support the terrorist group MEK. (listed by the State Department as a terrorist organization) 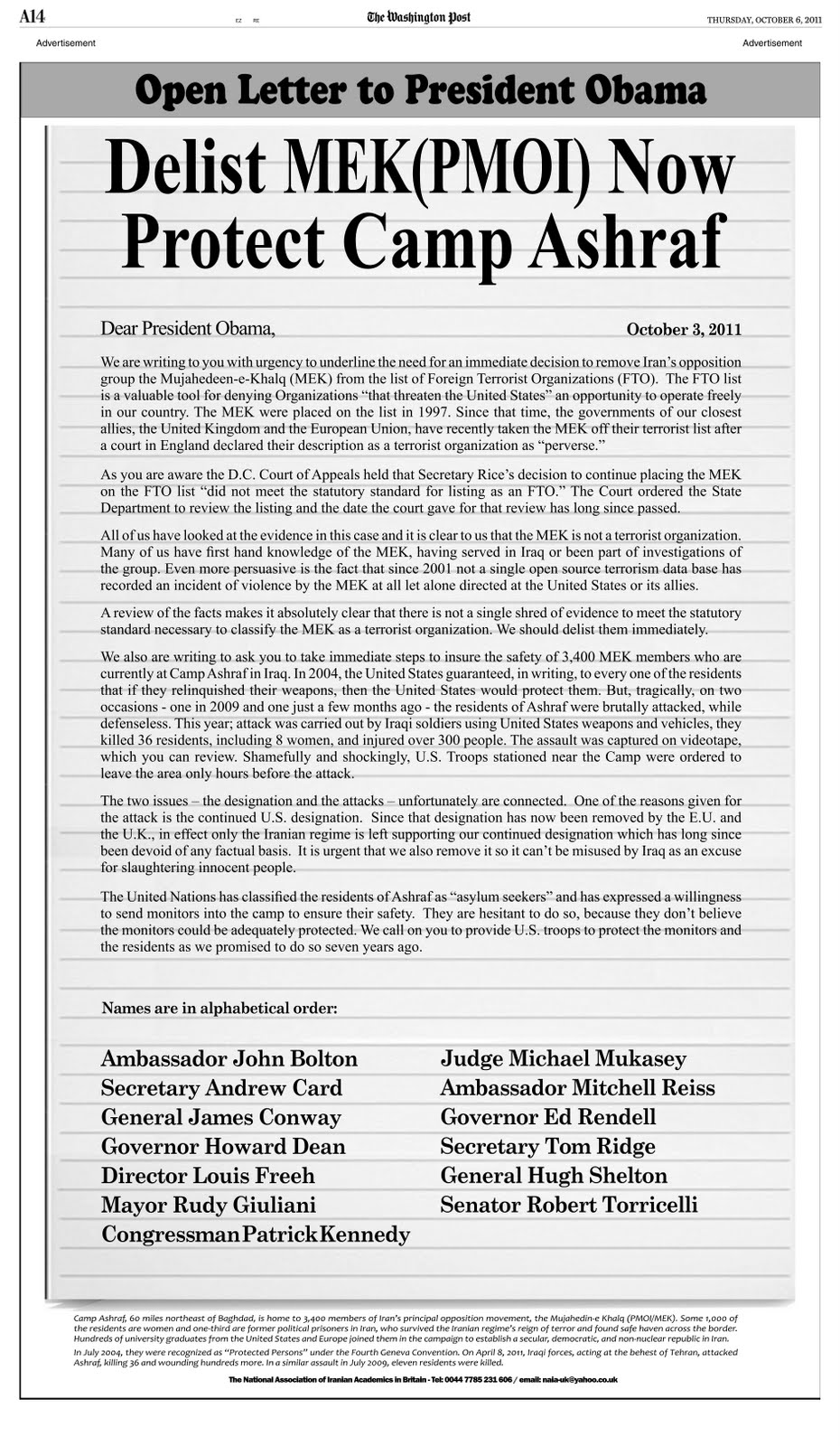 It was also revealed in Seymour Hersh’s 2008 New Yorker article “Preparing the Battlefield,” that not only had MEK been considered for their role as a possible proxy, but that the US had already begun arming and financing them to wage war inside Iran:

“The M.E.K. has been on the State Department’s terrorist list for more than a decade, yet in recent years the group has received arms and intelligence, directly or indirectly, from the United States. Some of the newly authorized covert funds, the Pentagon consultant told me, may well end up in M.E.K. coffers. “The new task force will work with the M.E.K. The Administration is desperate for results.” He added, “The M.E.K. has no C.P.A. auditing the books, and its leaders are thought to have been lining their pockets for years. If people only knew what the M.E.K. is getting, and how much is going to its bank accounts—and yet it is almost useless for the purposes the Administration intends.”

Seymore Hersh in an NPR interview, also claims that select MEK members have already received training in the US.

It was also revealed that US forces in Iraq had provided MEK’s main camp with security, and with the recent “withdrawal” of US troops from Iraq, the US State Department and even the UN have been scrambling to find a new safe haven for the US listed terrorist organization. Even more unimaginable is the fact that many of the foremost fearmongers and proponents of the “War on Terror” are engaged in desperate lobbying efforts to get MEK delisted by the US State Department. In October of 2011, a full page ad was taken out in the Washington Post on MEK’s behalf.

Image: Full-page treason – US politicians, many the most prominent proponents of the “War on Terror,” appeal to the President of the United States to delist MEK as a terrorist organization. While hand-wringing humanitarian concerns are cited, what the ad fails to mention is that MEK has long been sought after to serve as an armed US-proxy to be turned on Iran and carry out a campaign of terror, as stated clearly in the Brookings Institution “Which Path to Persia?” report. (click image to enlarge)

Among those signing the statement made in the ad were John Bolton, Howard Dean, Rudy Giuliani, Ed Rendell, and Tom Ridge. When reading the statement, it must be kept in mind that the Brookings Institution already confirmed that MEK was a terrorist organization and that it had verifiably killed US military personal and civilians.

Considering the fact that 99.9% of the so called 9/11 truth movement has been completly peaceful, the logical conclusion as to why 9/11 truthers and other everyday Americans are being labeled possible terrorists while certain American and Israeli officials publicly work with real terrorists is because of the threat they pose to the military industrial complex police state takeover plan that has been in the works long before 9/11.

You can view the full document here.