The Ambassador answered us that it was founded on the Laws of their Prophet, that it was written in their Koran, that all nations who should not have acknowledged their authority were sinners, that it was their right and duty to make war upon them wherever they could be found, and to make slaves of all they could take as Prisoners, and that every Musselman who should be slain in battle was sure to go to Paradise.

Jefferson, Adams and Franklin knew the United States did not have the money that the Muslim ambassador demanded. Their only hope was to get the U.S. Congress to agree to allow them to make a loan agreement with Holland.

Trending: The Muslims are Colonizing Under Your Noses – Putting Muslim Representatives Into Position Only to Attack!

John Adams, in his report to John Jay, gave his impression of Islam. He referred to Muhammad as a “military fanatic” who “denies that laws were made for him; he arrogates everything to himself by force of arms.”

In reviewing his experience, Franklin wrote: “Nor can the Plundering of Infidels be in that sacred Book (the Qur’an) forbidden, since it is well known from it, that God has given the World, and all that it contains, to his faithful Mussulmen, who are to enjoy it of Right as fast as they conquer it.”

When Jefferson became president in March 1801, the Barbary Coast pirates were extorting 25 percent of America’s GDP and were still attacking America’s merchant ships. Jefferson wasted no time and agreed to send the full might of America’s naval fleet to vanquish the Muslim pirates.

The Universal Goal of Islam. The goal of Islam has never changed since its inception over 1400 years ago: To conquer and subjugate the infidels wherever they may be found by any means possible and necessary. For the West and those in the United States to believe otherwise is pure folly and a potentially deadly error. As a zebra cannot change its stripes, neither can Islam be reformed into some passive, peacenik ideology.

In America, Muslims represent less than 2% of the total population. However, they have accomplished far more than in any other Western country in a very short time. Thanks to America’s diversity complex; desire to welcome all people; overall openness and kindness; Judeo-Christian heritage; ignorant and easily deceived church leaders and politicians; generous welfare laws that include non-citizens (including Social Security benefits); socialist-leaning government; adoption of the Islamist “Islamophobia” rhetoric and agenda and a host of other welcoming loopholes, Islamists are right at home in the country they seek to dominate.

Islamists—radical, fundamentalist Muslims—have successfully infiltrated America’s government (county, state and federal), military, law enforcement, educational systems (from elementary through university), legal systems, churches and every aspect of daily American life. Not fully, but effectively enough that it is changing the minds of Americans to accept the Muslim mindset more and more each day. The Muslims refer to it as the Civilization Jihad—the undermining of the very foundations of America from within.

This document, An Explanatory Memorandum, discovered by the FBI in a raid on a Muslim Brotherhood home in Annandale, Virginia in August 2004, details the agenda of the Muslim Brotherhood and its sympathizers in the United States. Despite the overt candor of the Memo, the media, most politicians and law enforcement have not taken it seriously. On the contrary, the media, politicians, law enforcement and America’s churches have become all too willing dupes of the Muslim Brotherhood. The MB is well on its way to accomplishing exactly what the Memo proclaims: destroying the Western civilization from within and “sabotaging” its miserable house by their hands.

“At what point then is the approach of danger to be expected? I answer, if it ever reach us, it must spring up amongst us. It cannot come from abroad. If destruction be our lot, we must ourselves be its author and finisher. As a nation of freemen, we must live through all time, or die by suicide.” –Abraham Lincoln, January 27, 1838

Islam and the U.S. Constitution are not compatible. The First Amendment of the United States of America Constitution reads: Congress shall make no law respecting an establishment of religion, or prohibiting the free exercise thereof; or abridging the freedom of speech, or of the press; or the right of the people peaceably to assemble, and to petition the Government for a redress of grievances.

America was the first nation in the history of the world to have such an extensive and all-inclusive “Bill of Rights.” Islam neither acknowledges nor believes in any of the freedoms presented in this treasured law of America.

In Islamic countries, it is the government that dictates the religion for its citizens. There is no freedom of choice for and individual to decide whether or not to worship Islam’s god. All must worship Allah or face severe persecution and consequences. Islamic governments, the mullahs and imams respect no religion other than Islam. In many Muslim countries, if one is allowed to remain a Jew or Christian, you must pay a “poll tax” that allows you to be a second class citizen. However, you cannot express your faith openly or share it with others. You are a prisoner of the confines of Islam. If your father is a Muslim, the moment you are born, you are a Muslim also. If you decide to leave Islam later in life, you risk abandonment by your family, at least, or death.

(1) Islam is the religion of the State.

(2) No religion other than Islam can be propagated in the country.

(3) No law can be enacted that is not compliant with the general principles and objectives of Shari’ah.

The Federal Republic of Somalia

Freedom of speech does not exist in Islam. It is Islam’s religious leaders and scholars that determine what one can say, especially if it pertains to Islam or its prophet, Muhammad. If one says anything critical or judgmental about Islam or Muhammad, one can go to prison or be executed. You are not allowed to question the ideology or its leaders. Their word is of Allah and infallible.

In Islamic countries, Islam is the Law. Islam functions as the Executive, Legislative and Judicial branches of government and dictates what every citizen is to believe and do. No freedom of thought or discussion is permitted.

Islam also does not observe freedom of the press. All official media must comply with Islamic teaching and not deviate in their presentations. Media releases are often fabricated to order to present the official positions of the Islamic government and to toe the line of Islamic propaganda.

The right to peacefully assemble or petition the government with grievances does not exist in Muslim countries. They are dictatorships. While there have been frequent citizen protests in places like Egypt and Iran, they are met with brutal force and death to silence any opposition to Islamic dictatorial rule.

Islam also dictates what women must wear, how they must behave, what she can do in public and basically suppress a woman’s life so that it is not her own, but only that which is dictated by her male superior.

Bottom line: Islam is oppressive, dictatorial and entraps men and women in a veil of bondage with no escape without severe consequences. It is the very antithesis of what America’s Founders envisioned and implemented by the wisdom of God Almighty.

JR, just thought about it when I saw Mr. Sizzle's meme.  Animal testing is horrible and I agree there needs to be protection in place.  Bush is a psychopath, so no surprise in his support.  It runs in the family.

Diana, well, that's good. The last thing Jesse Helms did in office was to sign a bill taking protections away from rodents and birds, so big pharma and consumer chemical product corporations could torture hundreds of millions of them to death, in the pursuit of poisoning us. Bush gleefully helped. 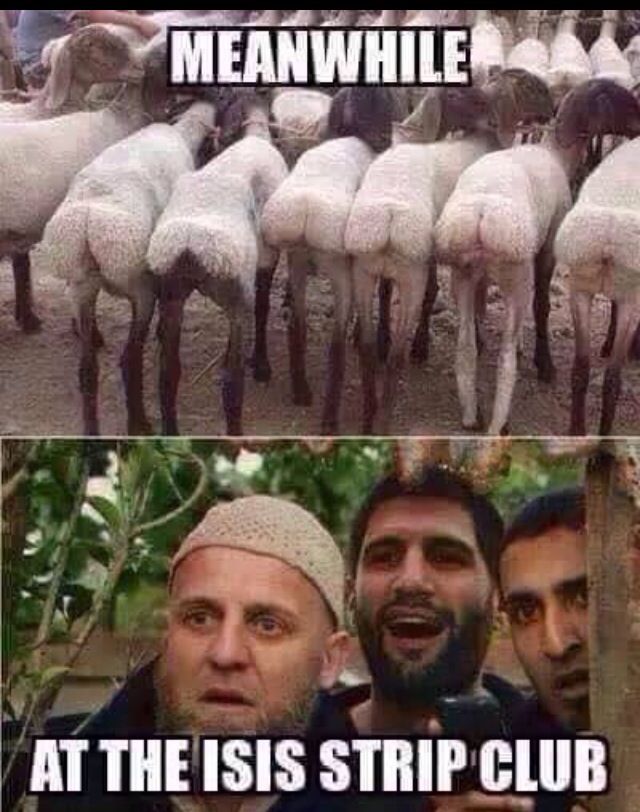