Kamala Father Donald, At Her Birth Had Been Sent To America As An Agent-In Grooming of The British Pilgrims Society 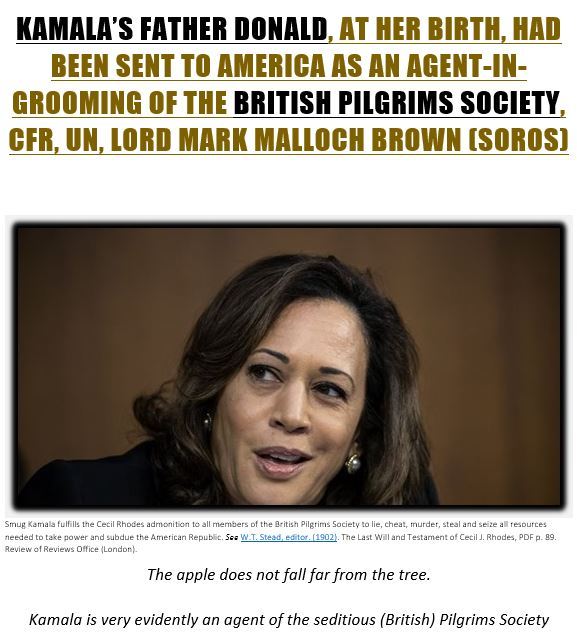 Aug. 08, 2020—A year ago we felt compelled to dig in to then candidate Kamala Harris’ family background to know her better. We were especially interested in vetting her support of reparations for black Americans, since she claimed she was black and had been persecuted. In fact, she attended only select schools and her tear-jerking story that she had been racially attacked during school busing has been proven false.

What we discovered was alarming. Many of Kamala’s claims are contradicted by the facts. Her Berkeley PhD student father, Donald Jasper Harris, was British/Jamaican, and listed himself so, on her birth certificate. Not black. Not creole. Not white. Jamaican.

Donald was being sponsored by foreign governments and diplomats associated with the British Privy Council, Pilgrims Society and United Nations. Therefore, her claim to anchor baby status does not apply. In addition, Donald and wife Gopalan were living in student housing and had no qualifying residence and domicile to qualify for 14th Amendment birthright status in that regard. Donald Harris was sent to the United States from Jamaica as a British citizen. See Donald J. Harris. (Aug. 07, 1959). Arrival, San Juan Puerto Rico Passenger and Crew Lists, Age 20, b. Aug. 23, 1938, Kingston, Jam., Nationality: British, A3534-San Juan, Puerto Rico, 1957-1959, Voyage No. 334/404. National Archives.

Most telling in this record is Donald’s declaration of Permanent Address. That line is mysteriously blurred out. But we can still read “Spanish Town, Jamaica.” There is a Spanish Town about 15 miles west of Kingston, the capital.

Corrupt Kamala immigration attorneys would have motivation to blur out Donald’s declaration of Permanent Address in Spanish Town, Jamaica. Because, in order for Kamala to claim “birthright citizenship,” Donald’s legal residence and domicile, as a student, would have had to have become his student housing address in California, just a few years after this declaration.

Foreign students rarely get such privileges, esp. one who had arrived in America as British, and then became Jamaican following home rule in 1962—unless you work for the (British) Pilgrims Society and get special treatment.

Anchor baby issues aside, Kamala is a fraud on the issues of reparations and so-called systemic racism alone—her great great grandfather Hamilton Brown enslaved both whites, blacks and creole, & trafficked those souls. She has no moral authority to speak on those issues. Kamala’s family background is systemically racist, by the fake news’ own definition.

Even more shocking is the fact that Kamala’s great great grandfather Hamilton Brown, by her father’s own admission, was a notorious British slave trader in Jamaica. Many times he records having taken slaves as payment for his legal fees from fellow slavers. He abused his slaves by direct testimony of a British eyewitness who was working for him as an intern.

Brown did not care from where he acquired his slaves. He had black, creole, white Irish, white German, white Portuguese slaves. How do we know? The British archives preserved the names of Hamilton Brown’s claimed slave properties. To this day Brown’s Town Jamaica is named after Kamala’s great great grandfather. So much for her moral authority on the issue of reparations, or systemic racism.

Mr. Sizzle replied to steve's discussion Look What WE Did.
"Should we say who’s the ownerships in the sports…"
12 hours ago

Mr. Sizzle favorited steve's discussion Look What WE Did.
12 hours ago

BITCH SLAPPING some sense into these sports NOTHINS. Mr. Salty has a laugh and splains to the got…See More
16 hours ago
1 Comment 1 Favorite

Phyllis Maka commented on Phyllis Maka's blog post Jim Stone: this was not a broadcast glitch, Pelosi actually glitched like that in real life. WTH is going on???
"frickin lizards their 3D world is breaking up! soon We will actually see it all with these human…"
17 hours ago

James Roberts commented on Phyllis Maka's blog post Jim Stone: this was not a broadcast glitch, Pelosi actually glitched like that in real life. WTH is going on???
19 hours ago

Phyllis Maka commented on Phyllis Maka's blog post Jim Stone: this was not a broadcast glitch, Pelosi actually glitched like that in real life. WTH is going on???
"She's a thoroughly programmed "cyborg""
20 hours ago