Well, a separation has happened. Mike Rivero has been banned on the Alex Jones show. JERRY! JERRY! JERRY! In comparison of the two sites, one is edgier with explicit words to describe the actions of the out of control governments and religions. The other is attempting to keep in mind the family at large and keep the verbiage minimal with its outrage of organized corruption at both levels of governments and religions. Having not heard Rivero's radio show, I am anticipating hearing it now where ever it lands. I have been checking both sites for news articles. Something I haven't seen Alex do is make similar statements as Rivero had on the subject of Wikileaks being a shill for the NWO. Rivero keeps crushing with the video of the 'Semitic' Settler cursing the camera crew and proud intoxicated rants of killing the Messiah. 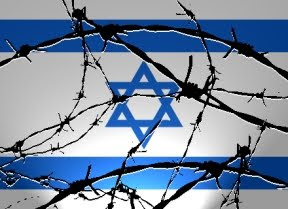 Jones and his handlers decide Michael Rivero must go. Not only from the Jones radio sideshow but from the GCN network as well. AJ waves his 'magic' zionist flag and makes things disappear.

"I have just been informed by the Alex Jones show that they are canceling my monthly interviews commencing this coming Tuesday. Imagine my shock and disappointment. No, really, just imagine it!"


WRH: "I have not made a big deal about the reasons for the move, but in a nutshell, GCN is a reflection of Alex Jones' views of the world, and more and more our points of view regarding Israel are diverging. I get a lot of email asking why I do not challenge Alex on his defense of Israel, or asking why every time I am on his show Alex feels obligated to have a pro-Israel representative on immediately afterwards to counter the points that I made.

I view the attack by Israel on a US flagged ship and Americans in international waters as an act of war and all who defend said attack as traitors to the USA. Alex holds a different view and I guess the breaking point was his rant in which he said that anyone who is a critic of Israel is a "weak-minded fool". That made it a personal attack, and I decided it was time to step out of Alex's shadow and go in a different direction."

Some interesting viewpoints, it seems some folks have their loyalties which is just human nature.  I had thought Alex Jones was actually Jewish because of his pro-israeli stance but because they have a right wing government with the Likud, is he just pro rightwing?  Alex is opinionated, you can't say he is not, his support of Tommy Robinson who is Jewish makes me think like in WW2 there are different factions in Jewish society, both right and left politically in competition with each other.  I have followed whatreallyhappened.com for 5 years or more, but although Mike has an opinion, it seems more balanced or in the very least is supported well with sources.  The criticisms of Israel are completely justified.  In the end, what serves folks better is a complete picture of events, not a biased or incomplete and I believe this is why the divide.  Mike Rivero gives a complete picture, Alex Jones gives a manufactured picture that still has merits but is incomplete.  Just my observations.

Comment by Burbia on January 14, 2011 at 12:35pm
right    on. chemtrails are there. he falls short as all do. a researcher exposing jewish zionist corruption?

Comment by Burbia on December 2, 2010 at 10:27pm
yeah. i don't know. he may have said so on air since the blog was written. here are the links to what i was referring to. i thought my blog was pointing out that jones was not reporting all the news out there. that rivero was making points about jewish zionism and its corrution not covered by jones. i think that when jones says, "don't believe me. do your own research." that he is referencing the elephant in the room that he is not acknowledging. perhaps i missed the retraction. no. the zionist jews are not the only ones behind the nwo. they are but a component of the cabal of corruption with a list of others doing the dirty work to achieve the nwo. thnx4 your concern though.

Comment by fireguy on December 1, 2010 at 4:52pm
Old Eleanor said a lot of crap, this is a pretty good quote KLC but for the most part I would not give two hoots in hell for any Roosevelt maybe one hoot for Teddy. LOL

Take the case of her notorious endorsement of Alger Hiss, in her column of August 16, 1948.

"Smearing good people like Alger Hiss and Lauchlin Currie [both Soviet espionage agents] is, I think, unforgivable...Anyone knowing either Mr. Currie or Mr. Hiss, who are two people whom I happen to know fairly well, would not need any denial on their part to know they are not Communists. Their records prove it."

Comment by Burbia on December 1, 2010 at 2:39pm
oh yeah. bill cooper was an opponent to the early alex jones media machine. apply all those tactics spoken by jones that the nwo use to take out their opponents then superimpose it onto the death of cooper and make your decision...

Comment by fireguy on November 30, 2010 at 1:27pm
"It is the DUTY of every patriot to make the tyrants life miserable"

Comment by fireguy on November 30, 2010 at 1:19pm
Alex Jones has always said he was not the leader if he wants to loose face by banning people so be it.

Comment by TheLasersShadow on August 4, 2010 at 4:48am
LOL but i would add the storys I've heard from Nancy Koernke about John Stadmiller make Jones look like a total angel. And you forgot Jack Blood and how he got booted from the Infowars team then harassed at other radio stations by Jones influence.

Comment by truth on August 3, 2010 at 7:07pm
"THEY CAME FIRST for John Stadmiller
and I didn't speak up because I wasn't a RBN listener

THEN THEY CAME for the Mike Rivero,

and I didn't speak up because I wasn't Mike Rivero.

THEN THEY CAME for me
and by that time no one was left to speak up."

British Plans to Depopulate the WorldBefore reading the information below, listen to a quick…See More
26 minutes ago
0 Comments 0 Favorites

Chris of the family Masters commented on King Of Cups's blog post The Satanic and Masonic Unholy Church of Darwinism and Neo-Darwinism. Brought to you by the Illuminati controlled Royal Society
"Feel free to claim your ancestors originated from monkeys, mine didn't."
53 minutes ago

Guardian of Scotland replied to stormtruther's discussion Are They Burning Dead Bodies In Wuhan, China To Hide The Inadvertent Release Of A Mortal Nerve Toxin? ( I vote plausible)
"I agree that the situation in China can not be from a nerve toxin. It has to be either a biological…"
4 hours ago

Doc Vega replied to stormtruther's discussion Are They Burning Dead Bodies In Wuhan, China To Hide The Inadvertent Release Of A Mortal Nerve Toxin? ( I vote plausible)
"I don't agree with the nerve toxin hypothesis at all. This appears to have all the telltale…"
4 hours ago

Guardian of Scotland replied to stormtruther's discussion Are They Burning Dead Bodies In Wuhan, China To Hide The Inadvertent Release Of A Mortal Nerve Toxin? ( I vote plausible)
"How do we know what exactly they are incinerating in China pigs or humans? Why is all of this…"
7 hours ago

"This kind of shit is already being shoveled into kids TV shows."
8 hours ago