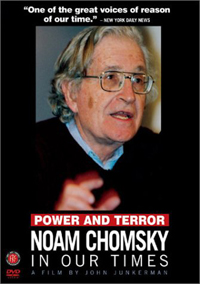 He enjoys a slavish cult-like following from millions leftist students, journalists, and activists worldwide who fawn over his dense books as if they were scripture. To them, Chomsky is the supreme deity, a priestly master whose logic cannot be questioned.

However as one begins to examine the interviews and writings of Chomsky, a different picture emerges. His books, so vociferously lauded in leftist circles, appear to be calculated disinformation designed to distract and confuse honest activists. Since the 1960's, Chomsky has acted as the premier Left gatekeeper, using his elevated status to cover up the major crimes of the global elite.

His formula over the years has stayed consistent: blame "America" and "corporations" while failing to examine the hidden Globalist overclass which pulls the strings, using the U.S. as an engine of creation and destruction. Then after pinning all the worlds ills on American imperialism, Chomsky offers the solution of world government under the United Nations.

Since 9-11, he has steadfastly refused to discuss the evidence of government complicity and prior knowledge. Furthermore he claims that the Council on Foreign Relations (CFR), Bilderberg Committee, and Trilateral Commission are "nothing organizations." When critiquing poverty, he never mentions the Federal Reserve and their role in manipulating the national debt.

Similarly, he claims the CIA was never a rogue organization and is an innocent scapegoat; that JFK was killed by the lone assassin Lee Harvey Oswald; that the obvious vote fraud in 2004 did not occur; and that peak oil is real and good for humanity.

What he does advocate is population control, gun control, support for U.N.E.S.C.O., and the end of national sovereignty infavor of a one-world government under the UN. In other words, the major goals of the New World Order.

Chomsky’s role in propaganda paradigm is much like that of Karl Marx: to present a false liberation ideology which actually supports the desired solutions of the elite. Marx pointed out the inequalities and brutality of capitalism and then advocated a one world bank, army, and government with the abolition of private property and religion; in other words, the major goals known of the New World Order.

Tens of millions of activists worldwide still remain trapped by this scam, failing to recognize the inherent autocratic and elitist structures of Marxism-Leninism or the newer incarnation under Chomsky.

The Globalist elites and their army of social scientists at the Tavistock Institute understand that people are going to question the inequities of the current economic system. For example, why is wealth distributed so unequally between classes and countries? Why are those living in third world nations allowed to die from preventable diseases and starvation? Why does the U.S. government sponsor and direct such murderous foreign policy? Why was America attacked on 9-11?

In other words, why is the world embroiled in such violence? Who is behind all this suffering? And most importantly, what solutions would relieve the poverty and destruction plaguing the worldwide population?

Enter Chomsky, the controlled opposition, to play the role of re-direct agent. He discusses a mere fraction of the real elite manipulation and then quickly pushes his followers into dead-end solutions and alienating rhetoric. Chomsky’s hero status is further amplified by Left gatekeeper publications like Z Magazine, DemocracyNow! (Amy Goodman),The Progressive, and The Nation.

Is it a coincidence that all of those magazines receive major funding from Globalist front-groups like the Rockefeller Foundation, Ford Foundation, Carnegie Endowment, and MacArthur Foundation?

Chomsky may be the head gatekeeper, but he works alongside a network of fellow Globalist assets like Amy Goodman who do their best to appear radical while avoiding all the hardcore issues and deliberately leading the Left into oblivion.

The following analysis will show that Chomsky, a deep cover agent for the New World Order, a master of black propaganda whose true motives become clear with a sober and honest examination.

911
Noam Chomsky has acted as the premier Left gatekeeper in the aftermath of the 9-11 crimes, lashing out at the 9-11 truth movement and claiming any suggestions of government complicity are fabrications.

The "radical" Chomsky takes a position so deeply rooted in denial that it makes the staged 9-11 whitewash commission look like an honest study. He belligerently refuses to discuss any of the massive evidence proving government foreknowledge and participation in the crimes, claiming it would destroy the activist movements worldwide:

"If the left spends its time on this, that's the end of the left, in my opinion: the mainstream would be utterly delighted. It is highly likely that nothing significant will be found. And if -- which I very greatly doubt -- something is found that would quickly send everyone in Washington to the death chamber, the left is unlikely to emerge triumphant." - Chomsky

In other words, Chomsky is telling his followers to ignore the evidence because according to him, none exists. However even if there is massive evidence, responsible activists should ignore it because it would be "the end of the Left." Chomsky’s role as a 9-11 gatekeeper goes even further as he denies each piece of evidence individually. The following examples should suffice:

1) As most honest 9-11 researchers know, 7 of the accused 19 hijackers are alive, proving the official story is a fabrication. Many of the remaining 12 were trained as U.S. Air Force bases and CIA-connected Huffman Aviation. Many of the accused "religious fanatics" acted more like degenerate contract agents, as they flashed wads of cash, visited strip clubs, drank profusely, blew cocaine, smoked weed, cavorted with strippers and had strange meetings in the drug-rich Florida keys.

Men like Mohammed Atta fit the MO of an undercover CIA drug runner: a man trained at U.S. Air Force bases, fluent in many languages, able to evade INS regulations, working with drug dealers, and receiving wired bank funds from CIA-linked Pakistani intelligence. There remains no photographic evidence of these supposed hijackers ever getting on the planes (walking through airport security does not count). Furthermore, the autopsy list of Flight 77 which supposedly hit the Pentagon listed none of the accused hijackers.

Regarding the evidence of government complicity in training the hijackers, Chomsky wrote the following:

"Nothing empirical is impossible. Thus, it is conceivable that everyone in the White House is totally insane. And in my opinion, that's what they would have had to be to try something that would have been very likely to turn into an utter fiasco, and if by some miracle had succeeded, would almost certainly have leaked, so that they would all be facing the death sentence. Possible, but not likely."

2) What about the unprecedented NORAD stand down on 9-11 which broke standard operation procedure? Over 67 times in 2001, NORAD had dispatched jets when they deviated from their flight path. In 1999, when golfer Payne Stewart’s single engine Lear in depressurized, NORAD planes were flying around the vessel in 20 minutes.

But on 9-11, Ben Sliney, in his first day on the job as hijacking coordinator for the FAA, delayed calls to NORAD. Meanwhile NORAD ran at least 7 hijacking drills that morning like Operation Vigilant Guardian where commercial jets crashed into government buildings in Manhattan, Washington DC, and Virginia. These "mock" drills, designed to give live on 9-11, helped to distract the honest people within NORAD and the FAA, and to evade suspicion from patriotic investigators within the CIA, FBI, and NSA’s Echelon network.

Of the subject of the NORAD stand down, Chomsky wrote the following:

"Whether NORAD followed SOP, I have no idea, not having investigated the matter. I think the case is very weak, and diverts people from the really serious issues."

3) How about the document called "Operation Northwoods" signed off in 1962 by the Joint Chiefs of Staff like Generals Lemnitzer and Landsdale? These men, sworn to protect the Constitution, devised a plan to create false-flag terrorism in order to engineer a war with Cuba. Their treasonous plans included the following:

-"Hijacking attempts against civil air and surface craft could appear to continue as harassing measures condoned by the Government of Cuba."

-"Exploding a few plastic bombs in carefully chosen spots, the arrest of Cuban agents and the release of prepared documents substantiating Cuban involvement also would be helpful in projecting the idea of an irresponsible government."

- "We could blow up a U.S. ship in Guantanamo Bay and blame Cuba . . . casualty lists in U.S. newspapers cause a helpful wave of indignation."

This document was discovered in the National Archives and has been the subject of mainstream articles by ABCNEWS and others. It stands as clear evidence that the U.S. government has designed plans to engineer terrorist attacks and blame them on foreign enemies. Yet Noam Chomsky does not think the Northwoods document matters: Operation Northwoods example is only one of many reasons for being skeptical about this: it doesn't even come close, and it was not carried out. Furthermore, there is nothing in history that even remotely resembles what is being proposed. Of course, that does not show that the thesis is impossible: nothing could show that, by definition. And if someone can put together some evidence and refute the arguments as to why it is extraordinarily unlikely, then the matter will be worth pursuing.

Chomsky’s role as the chief 9-11 gatekeeper proves he is distracting his leftist followers from the truth. Instead of facing the clear facts, he claims that 19 hijackers did it and that al-Qaeda is a real terrorist enemy. When presented with documented evidence, from living hijacker patsies to the NORAD stand down, he simply claims it doesn’t exist. He resorts to emotional "they would never do it" appeals in order to deny the obvious.

Chomsky is exhibiting far more than logical skepticism, but instead is actively engaging in disinformation.

He has NO credibility.

Chomsky is a member of the Knights of Malta

"If this is not a comedy, it's diabolical propaganda..."
50 minutes ago

February 25, 2021The central bankers regard humanity as so much unnecessary baggage and have begun…See More
5 hours ago
0 Comments 1 Favorite