Occupation in Canada: Stand Up

Occupy Canada is gearing up. I know that many of you in Canada might not think that "Occupying" Canada is important, but I'd like to take a moment to explain WHY you should be standing up and telling the government that we're pissed off.

Occupation in Canada: Stand Up.

With Occupy Wall Street well into it's third week, and Occupy Canada gearing up, I know that many of you in Canada might not think that "Occupying" Canada is important.  Many here in Canada might think that since our government has policies in place to (hopefully) insure that our banks and money machines don't fall apart like has/is happening in the US that there is no reason to protest,  that the protests planned in Canada's major cities are just an excuse to go out on the streets and wave signs and beat drums.  Talking about  the "Occupations" are not the usual topics that I tend to focus on, but I'd like to take a moment to explain WHY you should be standing up and telling the government that we're pissed off.

As a mom of 5, a breastfeeding and natural child birth advocate, and someone who spends hours a day researching subjects to do with health and family, I can tell you that we have a LOT to protest about. With two little sick boys today, I won't be able to get into huge details with lots of links, but I'd like to give you some basic thoughts to mull over and perhaps research for yourself.
I'm not an economist or a political science graduate, so I'm not going to get into those deep dark details of money and inflation.  I want to point out  those things that directly effect me and my family, and perhaps effect your family as well. I want to talk about what pisses me off and what's wrong with our current system.
Mega corporations are running our government.
Big Pharma: We are constantly bombarded with the government pushing the agenda of the mega corporations and we are faced with policies and regulations that have been set up to herd the public to do what the Mega Corps want.  Examples?  How about Big Pharma?  You all know that I'm not a supporter of the vaccine schedule that Health Canada is pushing.  But have you thought about the influence that Big Pharma has on our government- at all levels from municipal to federal?  Have you thought about how their money and power is used to bend the government to push their agenda?  Let alone the fact that  Big Pharma has convinced Canada to add more and more vaccines to the "schedule" (the number of vaccines  scheduled has doubled since 1980), lets talk about the massive waste of money of the H1N1 vaccine.  Through the machinations of the major power players of the pharmaceutical world, the Canadian Government spent $1.5 Billion on Vaccines between Oct and Nov of 2009 alone! ... and near half of those doses sit expiring in storage. Oh and that doesn't include the money spent on the Tamiflu medication that (doesn't work) was stockpiled by the government. The taxpayers paid for those vaccines. Vaccines that were suppose to save us from a "Pandemic" that never happened and was a nothing more than a money grab for Big Pharma from  countries all over the world.
...sorry, I'm ranting.  The topic of Vaccines does that to me.
Lets talk about how the government lets Big Pharma get away with charging unbelievable amounts of money for life saving drugs.  5 years ago I had some serious migraine headaches and my doctor gave me a sample pill to take- she saved these samples for patients like myself who don't have drug coverage/insurance- because these pills were $75 EACH!!  Even if these tiny pills were made with pure gold, they couldn't possibly be worth that much money!  Cancer drugs, heart medications, drugs for debilitating diseases..... family loose their homes to save the lives of their loved ones.  Yes, In Canada.
How about the pressure of Big Pharma to get the government to ban health foods and alternative medicines? They don't want you to know about simple cures that they can't make money on, and our government follows along in their agenda by creating laws that make health foods and alternative medicines difficult if not impossible to buy/market/use.
Infant Formula companies: Canada signed the World Health Organizations International Code of Marketing of Breastmilk Substitutes  when it was adopted by the World Health Assembly in 1981.  Since then the Canadian government has done absolutely NOTHING to promote the Code, or to protect the Code through the creations of laws.  Infant Formula companies, like Nestle, give millions of dollars to our government, major health agencies and hospitals, and they use the power of their money to influence government policies. Earlier this year I organized a working group that wrote a detailed response to Health Canada's call for submissions on their Draft Document "Infant Nutrition- birth to 6 months".  One of our biggest concerns, echoed by INFACT Canada, was that three of the members of the Committee in charge of writing and editing this draft doc were in the pay of infant formula companies!!!  When Infant formula companies are allowed to do whatever they want, the health of our youngest citizens are in jeopardy.
Mega corporations are raking in the money hand over fist, and paying their upper management and CEOs ludicrous amounts of money..... that we pay for.  Take a look at what the Ontario Hydro companies are paying and then ask yourselves why your electric bill so high.  Take a look at what your banking executives salaries are and ask your self why you still have to pay fees every month for the banks to use YOUR money to make money.
Our provincial health care coverage is being chipped away every year.  The cost of living is going up almost as fast as the cost of gold, yet our salaries pretty much stay the same.  Our farmers are going out of business, yet the cost of flour has doubled in the last 3 years.  The price of buying a house anywhere near a major population centre has increased to the point that only the rich can afford to even think about buying a house.  The cost of rent has risen to reflect these costs and many families can barely afford to put a roof over the heads of their children.  The price of gasoline continually jumps higher and higher making it harder and harder to afford to drive to work from outlying regions (but you can't afford to move any closer to work because the prices are too high).  Food costs are soaring.  Energy costs are soaring..... everything is soaring except the money in yourwallet...... and taxes just keep going up and up
. 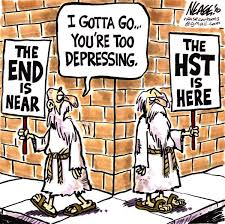 Canada has the largest freshwater stores in the world, produces the most wheat, has more oil that Saudi Arabia, more arable land per capita than any other country. We have natural gas coming out the wazoo, every precious mineral known to man, the best fresh produce and livestock in the world.....

....Yet we are in debt up to our eyebrows, and one in 6 children in our great nation lives in poverty.
Now I don't know  how you feel, but in my opinion this is WRONG.  I don't know about you, but I'm planning on standing up to my government and telling them that I don't believe in them anymore, I don't want them any more, and things HAVE to change.

Less Prone commented on Central Scrutinizer's group Agnostic & Atheist Patriots
"This is a quote from CAT'S CRADLE by Kurt Vonnegut., "The fourteenth book of Bokonon...…"
6 hours ago

"Why is it only WHITE COUNTRIES need DIEversity, how about china ,japland ,or ANY WHERE ON THE WHOLE…"
6 hours ago

"The ideas of white privilege and so on are crazy. Take the slave issue and understand that the…"
6 hours ago

"It is nonsense V nonsense LP But we are in clown world here, we are segregated in the binds of…"
6 hours ago

"The seeds of chaos have been planted and those who did it observe us from a safe distance."
6 hours ago

JADA SNOWDEN is now a member of 12160 Social Network
7 hours ago
Welcome Them!

"What "nonsense " are you referring to?  Why don't these white haters go back to…"
8 hours ago

"So, fighting nonsense with more nonsense is the solution."
8 hours ago

"What purpose, other than dividing the population into groups hating each others, does this twaddle…"
9 hours ago