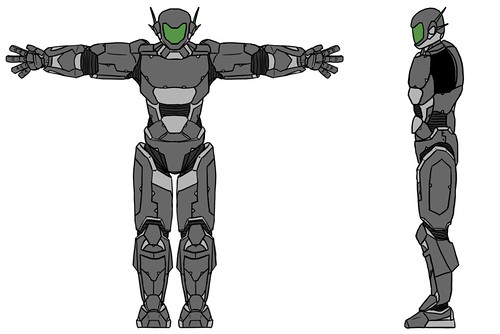 Prototype model Giga Voltwent berserk within the Area 17 facility, killing several workers and severely injuring Mr. Synthe, his creator. Within the chaos, Giga Volt escaped into the the desert and ventured to nearby towns, killing any humans he came across.

The United States Artificial Intelligence Weapon Program (A.I.W.P.) is America's leading force in technological research and development. Originally a branch of the Armed Forces concerned with the military application of the growing trend of technologies in both robotics and computers, it has evolved into a branch of the government concerned with a wide range of technologies and their applications. With both their government backing and commercial enterprises, they have an enormous budget which allows them to tackle anything from biomedical research, to commercial and household products.

While over the years the A.I.W.P. has become more involved with research, they are still a branch of the Armed Forces, and therefore, employ soldiers. Although small compared to the amount of scientists and engineers at the facility, they are highly trained in all aspects of combat, and usually treated as special forces units. One of the more famous teams are those who make use of the A.I.W.P.'s Ion Cannon technology. Usually comprising of a squad of 3 or more, these teams are trained with the use and maintenance of high-energy particle beam weaponry, and have been proven to be highly effective in combat situations.

Of all the projects undertaken by the A.I.W.P., few have generated as much attention as Project Voltaic, and is responsible for many positive and negative outlooks on the organization.

The project began in the late 1990's as a collaboration between the A.I.W.P. and Synthe Technological Enterprises to create a new age of unmanned warfare. The world's increased reliance on technology and machines prompted the two partners to create a line of unmanned robotic soldiers, with the hope of being effective against both human and mechanical threats. With the A.I.W.P.'s research and Synthe Tech's resources, they were able to progress more quickly than either group could have alone.

In less than 10 years, despite the initial projection of 15-20, the two groups had a fully functioning prototype capable of autonomous activity. Prototype BT643012, code name "Giga Volt", was gifted with the mind of a supercomputer, able to easily calculate and strategize on the battlefield, as well as generate complex plans and tactics resulting in quick and decisive victories. In addition to being trained in the basic use of many different weapons and artillery, Giga Volt was capable of emitting and directing large arcs of electricity with extreme accuracy, thanks to advances in energy storage technology. Ecstatic about their progress, the two groups immediately threw their creation into battlefield simulations to evaluate its effectiveness, confident of it's abilities and eager to start mass production.

But as Giga Volt experienced simulation after simulation of warfare, glitches began to occur. The prototype began to have trouble distinguishing between targets, and sometimes couldn't correctly evaluate that a target posed no threat to him. Despite some minor warnings, the simulations proceeded until one day in late October. At that time, Giga Volt was fully unable to tell the difference between hostile and friendly forces, choosing instead to see every target as a potential threat. That day, Giga Volt overpowered its escort squad and began wreaking havoc throughout the Area 17 facility. Having only a small squad to try and detain him, those at the facility instead decided to let Giga Volt escape, rather than suffer more losses at the hands of the AWOL robot.

By the time adequate backup had arrived, Giga Volt had been long gone from the facility and had escaped the notice of both state and federal officials. With almost no trail with which to track him, the companies had no choice but to inform the local populace of the threat.

The media backlash was enormous, going from local news story to national response within the week. People were appalled with how the two organizations had handled this situation, causing widespread negative opinions of both. The A.I.W.P., with their government backing and multitude of other projects, were able to survive the negative attention relatively unscathed, and continued to focus most of their efforts on finding their escaped project. Synthe Tech, however, was devastated by the backlash and nearly went bankrupt when all their investors withdrew.

Devlin Synthe, founder and C.E.O. of the company, was faced with losing his life's work, and demanded compensation from the A.I.W.P. A fierce legal battle between the two organizations erupted, undermining efforts of the A.I.W.P. to track down Giga Volt and causing more negative media attention for both companies. Because of this, it was nearly two years before Giga Volt was found, and not before causing the deaths of dozens of innocent people due to his faulty programming.

Giga Volt was the first robot student to join the Academy. Formerly a rogue military droid, he gained a large reputation as a murderous villain before finally being detained, memory-wiped, and reformatted. He was sent to the Academy's Dr. Nakagawa for further repairs, later to be initiated into the school to gain "social training". Basically it was extra assurance that he wouldn't go AWOL again. He now lives and attends classes with the other students, and has a habit of displaying antisocial behavior towards other students and faculty. In time he's become known by many as "a big jerk".

Giga's original personality was that of a stereotypical robot; Calculating, emotionless, and uncaring. The students only knew him like this for a brief period, however. When he was first activated by the students, Giga attempted to hack into the surveillance system of the airplane hangar in the Viper-controlled Academy. The viruses in the system attacked him, causing him to involuntarily shut down. He was able to be salvaged by Dr. L33t, an AI created by Dr. Nakagawa, but his personality was changed when he was reactivated. Due to some combination of Dr. L33t and the viruses going around in his brain, Giga developed an almost human personality, though still containing a few traces of his formerly robotic way of thinking.

Since then, Giga has gained a bit of a reputation as a cruel person and a jerk to mostly everyone. He's taken to calling most humans "meatbags", and has an inflated sense of self-worth when comparing himself to them. He will occasionally pull pranks and delinquent acts on those around him, and his behavior will usually get him into trouble with his teammates and the Academy faculty. This behavior has diminished somewhat as he gravitated towards isolation, but continues to hold a low opinion, and a lower tolerance, of those around him. Nevertheless, he is more than dependable in any serious situation, and can be counted on to put bygones aside in light of a mission.

Parrhesia commented on tjdavis's blog post Canadian Actress Jennifer Gibson on Jabs
"She makes the connection to the jab, but "it's what we must do" so jab me…"
20 hours ago