Red August: When One's Race Is Determined by Ideologues and Demagogues 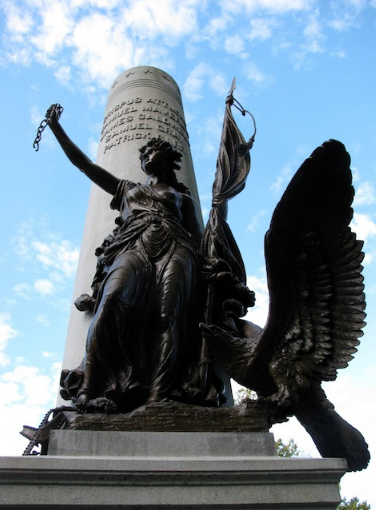 God cannot give us a happiness and peace apart from Himself, because it is not there. There is no such thing.  –  C.S. Lewis

There is but one mass of concrete, mortar, and bronze that seems out of the reach of the Extreme Leftists of Our Day.  Mind you, for the moment, it is out of reach but, certainly, not out of mind.  At Boston Common, between Tremont St and Avery St in Boston, Massachusetts, there arising from the Earth is a cylindrical monument to the revolutionary deeds of America's first martyrs of patriotism.  It honors the deaths of Crispus Attucks, James Caldwell, Patrick Carr, Samuel Gray and Samuel Maverick.  They that perished on Monday, March 5, 1770,  during the "Incident on King Street", would harness the revolutionary spirit of one-third of the American colonists.  Paul Revere and Samuel Adams led the "propaganda war" that would memorialize their deaths and lead to the overthrow of British rule.  Standing 25 feet high and 10 feet wide, it has weathered the mighty blasts of winter and the intensive heat of summers.  Those that gave their lives for the causes of liberty, freedom, natural rights, and sovereignty will be eternally observed by the Boston Massacre / Crispus Attucks monument.  Less the Extreme Leftists wrest this mighty symbol of individual sovereignty with a hammer, sickle, and chain.

The Nation has been seized by the Extreme Leftists' and Establishment Apologists' narratives regarding race, expunging history, and political correctness.  The term is not merely crafted as a metaphor but, used as a literal expression of how millions of Americans are held captive by those that report and commentate on the violent intentions of such vile groups as ANTIFA, the Ku Klux Klan, BlackLivesMatters, The Triangle People’s Assembly, Workers World Party, Industrial Workers of the World, Democratic Socialists of America and others.  Reporters and commentators, with tears that neither Frederick Douglass or Hariett Tubmen ever wasted,  provocateurs to their coming American revolution, tear into the President of the United States Donald J. Trump for being morally depraved and others questioning his mental stability.  Amazingly, since he only spoke words in observation, the Leftists organized every unit of their revolutionary army to attack the innocent and defend the guilty.  Like clockwork or deceitful strategy, the Establishment cowered accepting blame for over 400 years of Democrat oppression.  When time passed, the world discovered that Trump was right yet, the damage was done.  Millions of Americans were indicted as "racists" in the Court of Public Opinion.  History began to disappear before our very eyes.  The Radicals cried aloud for Impeachment and even their Legislative Statesmen demand his assassination. Their comics raised the severed head of Trump and, now, even his "friends" on Capitol Hill were questioning his resolution towards ending slavery in the United States.  Wait a minute, we have done that already?!  The Leftists brought the Hammer and Sickle and the Establishment the chains and ropes.

Envigorated, the Leftists' armies marched from Charlottesville, VA to Chicago, IL and then, onward to Pheonix, AZ.  Throughout their campaign, Leftists stole the spotlight as beleaguered and misunderstood "peace protestors", killed a woman, and destroyed public and private property throughout.  Liken General Nathan Bedford Forrest, the Left coalesce their independent corps and raid cities, drawing attentions away from more immediate matters, both foreign and domestic.  Their sympathizers in governance order their law enforcement to "stand down".  Whether to burn down Ferguson, MO, Baltimore, MD, or terrorize Dallas, TX, the Leftists are a "resistance" that is determined to overthrow the current Administration and, if given the proper winds of battle, the United States. 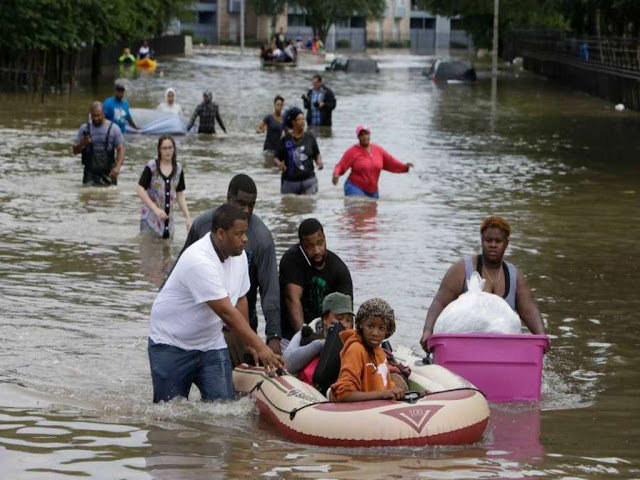 Even within states facing imminent natural disaster, the Left is willing to sacrifice the lives of hundreds of thousands for the sake of withstanding the wisdom of conservatives.  Texas Governor Greg Abbotttold Houston residents, on August 25, 2017, that even in the absence of an official evacuation order that leaving was essential to sustaining life and health.

"Even if an evacuation order has not been issued by your local official, if you are in areas between Corpus Christi and Houston ... you need to strongly consider evacuating," Abbott said mid-day Friday in a basement bunker at the state emergency operations center in Austin.

Houston Mayor Sylvester Turner said on Friday evacuation was not necessary: “There are a number of people who are in Hurricane Harvey’s direct path, and evacuation orders have been given to them. But for the Houston area… this is a rainmaker for us. There’s no need for people to be thinking about putting themselves in greater danger.”

Harris County Judge Ed Emmett said: “stay where you are and ride out the storm… We don’t anticipate any kind of massive evacuation.”

How dare the white governor of Texas order us to leave our fair city of Houston.  Does he not know that we stole the rainbow from Noah and no harm shall come our way?  What could a stinking conservative know about Life?  We built the largest abortion clinic in America within our borders.  We know how to protect life.

Yes.  What will 50 inches of rain do to Houston?  "Just a rainmaker for us."  Riiiiiiiiiiiiiiiight.  So you must know that federal help through the State Governor will help the many in need in Houston, Mr. Mayor.  No sense being prideful Mr. Mayor about this mistake.  I mean as a prophet, and you are a believer in prayer, you appeared on the "Isaiah Talk" Show on Fox 26 and told the people, "Peace, Peace, Peace".  The Show Host, the Vice-Mayor, and you sang from the same music sheet "No Worries, Be Happy".  I know that there are other major concerns for Blacks in Houston than flood waters from Hurricane Harvey.  Last week, more than 400 socialists, liberals, and Black Lives Matteractivists showed up to demand the removal a controversial Confederate monument in Sam Houston Park.  They were concerned that you had to toil in the shadow of the Confederacy:

"It's deeper than statues," said Ashton Woods, Black Lives Matters organizer. "The statue is a symbolic gesture on both sides. It was erected to intimidate people who look like me...[Houston's black leaders, such as Sylvester Turner, are forced to work] in the shadow of a Confederate statue".

The Left's radicals will not mind you relenting your "blackness" for a moment and then, asking for some help.  I know he is white and you are black.  I know that he has looked very successful and you foolish.  Certainly, the lives of the good people of Houston are of greater value than your demagoguery.  Certainly, you may bend from your ideological tree branch, from whence your blackness grows, and say, "Mr. Governor, we need your help."  Maybe just a private call from your cell phone.  No one will have to know.

Continue Reading at The Voice of Liberty

Red August: When One's Race Is Determined by Ideologues and Demagogues

"HEARTLESS GREEDY MONEY GRABBING PAID OFF BOUGHT OFF WHORES. Is the only logical explanation I can…"
2 hours ago

"Can you just imagine a world without all the marvels created by men, all the anger and slander that…"
2 hours ago

Parrhesia replied to Parrhesia's discussion Good News: ‘We had ZERO percent inflation’: Biden dazed and confused after July 8.5% inflation rate announced
"It must be true Joe said so.  lol “The Party told you to reject the evidence of your…"
2 hours ago

steve replied to Parrhesia's discussion Good News: ‘We had ZERO percent inflation’: Biden dazed and confused after July 8.5% inflation rate announced
"Can anyone anywhere name one thing that REALLY WENT DOWN, going from 2$ to 5$ then down to 4$…"
3 hours ago

"Pretty damn giddy for just "losing his son", what a fkn scumbag hoax actor playing on…"
3 hours ago

"I am 63 years old and have NEVER VOTED, WhenI was a youngin it seemed a foolish thing to vote for…"
3 hours ago