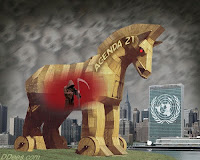 In an example of just how deep the roots of Agenda 21 can reach, it is now obvious that the UN-generated guidelines are making their way through state legislatures as well as the federal branch. Not only that, but such legislation has expanded from inside the boundaries of the usual suspects like California and New York, and is now even reaching into southern states like South Carolina, which have traditionally been opposed to such policies.

In a nutshell, the plan calls for governments to take control of all land use and not leave any of the decision making in the hands of private property owners.  It is assumed that people are not good stewards of their land and the government will do a better job if they are in control.  Individual rights in general are to give way to the needs of communities as determined by the governing body.  Moreover, people should be rounded up off the land and packed into human settlements, or islands of human habitation, close to employment centers and transportation.  Another program, called the Wildlands Project spells out how most of the land is to be set aside for non-humans.

This definition seems to fit a new resolution in the South Carolina State Congress, entitled the Commercial Center Retrofit Act, or. H.3604. Indeed, much of the bill reads as almost a direct translation of the mission of Agenda 21.

The Commercial Center Retrofit Act, now in Congressional subcommittee, has been introduced under the cover of merely encouraging the South Carolina Council of Governments to adopt ordinances and guidelines that will “enable the retrofitting of shopping malls and shopping centers into dense, walkable, mixed-use town centers.”


Now, let me first say that this idea, in and of itself, is not such a bad thing. Allowing and encouraging the retrofitting of buildings so that they use less energy, have less impact on the environment, and blend in with the rest of the community is actually something that should be encouraged. However, the Commercial Center Retrofit Act is not about encouraging such “green” improvements and environmentally-conscious building. This new resolution is solely dedicated to the implementation of Agenda 21.

It also bears noting that the South Carolina Council of Governments is an unelected body made up of regional “local” governments. Each sub-council within the larger council is made up of a grouping of local governments belonging to a specific region of the state. This body is not accountable to the people of South Carolina, yet they are clearly involved in making very important decisions.
With this in mind, it is not surprising that the Commercial Center Retrofit Act contains language right out of the Agenda 21 playbook. For instance, the preamble to the bill reads:

To encourage the South Carolina Council of Governments to adopt ordinances intended to enable the retrofitting of shopping malls and shopping centers into dense, walkable, mixed-use town centers, and to encourage other measures to promote a human habitat that is hospitable and accessible to more South Carolinians while lessening environmental impacts on the state.

You can find your legislator by using this helpful search engine provided by the South Carolina State House.

You can support this information by voting on Reddit:  http://www.reddit.com/r/conspiracy/comments/su1d1/south_carolina_mo...

Brandon Turbeville is an author out of Mullins, South Carolina. He has a Bachelor's Degree from Francis Marion University and is the author of three books, Codex Alimentarius -- The End of Health Freedom, 7 Real Conspiracies, and Five Sense Solutions. Turbeville has published over one hundred articles dealing with a wide variety of subjects including health, economics, government corruption, and civil liberties. Brandon Turbeville is available for podcast, radio, and TV interviews. Please contact us at activistpost (at) gmail.com.

Chris of the family Masters replied to Guardian of Scotland's discussion Why are magnets sticking to the injection sites of those that have taken the Covid 19 injections?
"I second what the one girl said - "We are fucked"...."
9 minutes ago

Chris of the family Masters favorited Guardian of Scotland's discussion Why are magnets sticking to the injection sites of those that have taken the Covid 19 injections?
11 minutes ago

Chris of the family Masters posted discussions
53 minutes ago

"Literally. A fucking fruitcake."
4 hours ago

"What a race of WHINY ASS NUTHINS ,always handsout beggin for somthin for nuffin from the evil…"
5 hours ago

cheeki kea commented on Chris of the family Masters's blog post NOTE TO EMPLOYER
"Take Note Workers. Well worth the effort."
7 hours ago