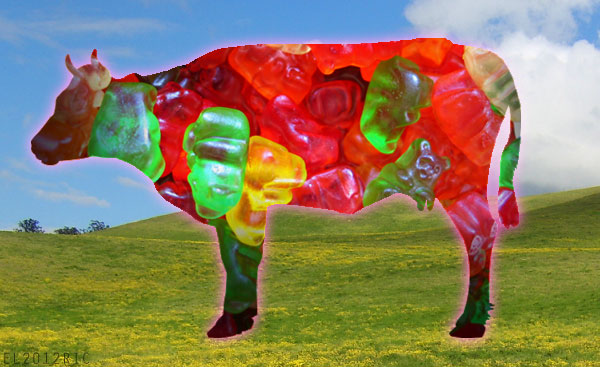 Mike Yoder’s herd of dairy cattle are living the sweet life. With corn feed scarcer and costlier than ever, Yoder increasingly is looking for cheaper alternatives -- and this summer he found a good deal on ice cream sprinkles.

"It’s a pretty colorful load," said Yoder, who operates about 450 dairy cows on his farm in northern Indiana. "Anything that keeps the feed costs down."

As the worst drought in half a century has ravaged this year’s U.S. corn crop and driven corn prices sky high, the market for alternative feed rations for beef and dairy cows has also skyrocketed. Brokers are gathering up discarded food products and putting them out for the highest bid to feed lot operators and dairy producers, who are scrambling to keep their animals fed.

In the mix are cookies, gummy worms, marshmallows, fruit loops, orange peels, even dried cranberries. Cattlemen are feeding virtually anything they can get their hands on that will replace the starchy sugar content traditionally delivered to the animals through corn.

"Everybody is looking for alternatives," said Ki Fanning, a nutritionist with Great Plains Livestock Consulting in Eagle, Nebraska. "It’s kind of funny the first time you see it but it works well. The big advantage to that is you can turn something you normally throw away into something that can be consumed. The amazing thing about a ruminant, a cow, you can take those type of ingredients and turn them into food."

Feed is generally the largest single production expense for cattle operators. Whatever is fed needs to supply energy and protein levels that meet the animals’ nutritional needs. High prices for soy has operators seeking alternatives for both corn and soy.

Corn alternatives are in particular demand as supplies are so tight that in some areas of the country, feed corn is not available at any price.

Pricing and availability of the many different "co-products" as they are called, varies from place to place, but buyers report savings of 10 percent to 50 percent.

The savings for operators are shrinking, however, as savvy resellers tie pricing for their alternative offerings to the price of corn, which surged to record highs this summer due to drought damage.

The U.S. Department of Agriculture said last month the harvest now underway will yield the smallest corn crop in six years due to the drought that is still gripping more than half of the nation.

"They are using less corn in a number of these rations, but as corn prices go up, prices for really every other co-product go up too," said Greg Lardy, head of the animal sciences department at North Dakota State University.

Operators must be careful to follow detailed nutritional analyses for their animals to make sure they are getting a healthy mix of nutrients, animal nutritionists caution. But ruminant animals such as cattle can safely ingest a wide variety of feedstuffs that chickens and hogs can’t.

The candy and cookies are only a small part of a broad mix of alternative feed offerings for cattle. Many operators use distillers grains, a byproduct that comes from the manufacture of ethanol. Other common non-corn alternatives include cottonseed hulls, rice products, potato products, peanut pellet.

Wheat "middlings," a byproduct of milling wheat for flour that contain particles of flour, bran, and wheat germ, also are fed.

And every now and then, there is a little chocolate for the hungry cows.

Hansen Mueller Grain out of Omaha, Nebraska, which markets chocolate bars alongside oats and peanut pellets, said it all comes down to fat, sugar and energy.

"That’s all it is," said Bran Dill, a spokesman at Hansen Mueller. Demand is high, he said.

"The price of this stuff has gone up so much it’s gotten ridiculous," he said.

Feeding cattle with confectionary made from animal gelatin and soya, not to mention the issue of processed refined sugars.

Oh it doesn't matter, it's cheap, just as the ground up animal meal fed to cows that led to the outbreak of BSA was cheap.

The absolute stupidity of some beings walking the planet, makes me despair.

"A Real Phone ! Give it the drop test and it'll damage the floor, but drop the hand set and it…"
21 minutes ago

Kyle Rittenhouse - The Truth in 11 Minutes

To support Kyle and his fight for justice, text "KYLE" to 36413 Visit Our Website https://fightback.law/ Paypal Donation Page https://www.paypal.com/donate/?...
3 hours ago
0 Comments 0 Favorites

Central Scrutinizer left a comment for EDWIN
"Sup EDWIN, Glad ya made it... to 12160 ,...where you'll find an enormous collection of…"
10 hours ago

Central Scrutinizer left a comment for Travis Bins
"Sup Travis, Welcome to one of the few remaining digital representations of rationality, logical…"
11 hours ago

Central Scrutinizer left a comment for Daz
"Sup Daz, Glad ya made it,... here,...one of the few remaining vestiges of rationality, sanity,…"
11 hours ago

William S. Stickman IV... A name to remember. Discussing his recent judgment in which he strikes down 2 Pennsylvania lockdown measures, deeming them to be un...
12 hours ago
0 Comments 0 Favorites

Recently uncovered fraud allows us to disqualify any document. They all contain intentional…See More
12 hours ago
0 Comments 0 Favorites