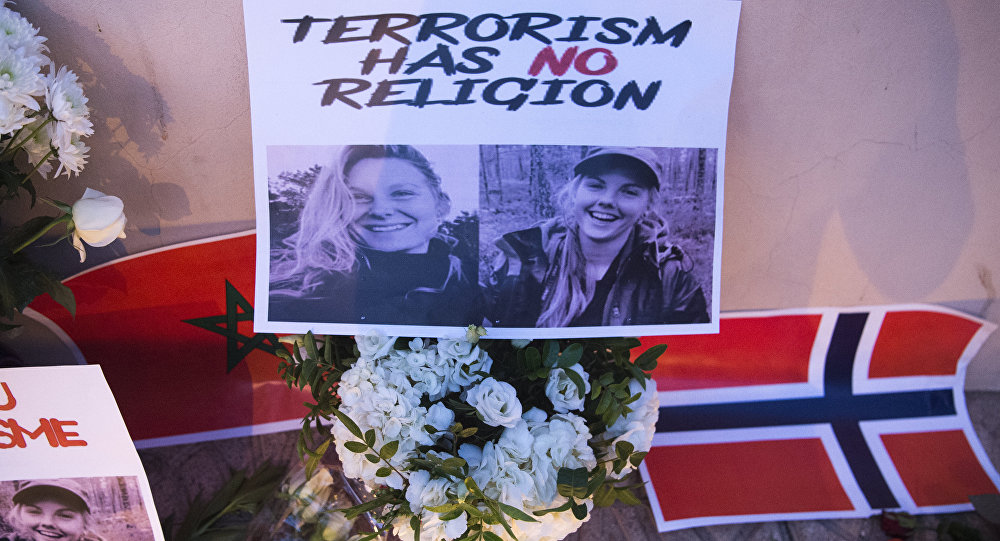 Not only did the state broadcaster run an article claiming that the bestial murder of two Scandinavian girls in Morocco "had nothing to do with Islam", but it also put the emphasis on the fact that sharing the graphic video of the killing is illegal, while downplaying the sheer brutality of the murder itself, many viewers complained.

Swedish national broadcaster SVT has come under a storm of criticism for its coverage of the double murder of Louisa Vesterager Jespersen (24) and Maren Ueland (28) by Islamists in Morocco.

Many viewers complained that the state broadcaster was more concerned by the video of the killing being spread than the grisly murders themselves. While one of the victims was decapitated alive in the style of Daesh* executions, SVT didn't mention the beheading at all, instead merely reporting about "neck wounds".

The clip is so brutal that many people who have watched it admit to it having a deep impact and regret having ever played it.

"Happened to watch the movie clip that is being circulated. The one where one of them gets her head cut off. I wish I could unsee it. I've seen many horrible things. For a while I felt a responsibility as a journalist to see the movie clips that Daesh (and AQ*) released. Still, this was much worse. It is the worst I have ever seen. It will haunt me", Svenska Dagbladet columnist Ivar Arpi wrote on his Facebook page, calling the murderers "beasts".

SVT, however, chose another angle, warning fellow Swedes not to share the graphic clip, informing that violation of the law may be punished with up to four years' imprisonment.

"We have got very good legislation in place called unlawful infringement. This law is aimed at just this kind of case when someone spreads information or images of somebody in a vulnerable position", former prosecutor Sven-Erik Alhem told SVT.

Previously, SVT also ran a report from a memorial ceremony in Marrakesh condemning the murders. In the clip, an anonymous woman claimed that the victims "could have been anyone", with another person stressing that "This is not Islam" and "has nothing to do with it".

"To sum up SVT's coverage of the Muslim terrorist attack in Morocco and Daesh 'warriors': 1) You'll be sent to prison if you spread the beheading film, you racist Nazi! 2) Daesh warriors have returned home to Sweden 3) They died of knife wounds, sort of 4) The murder in Morocco has nothing to do with Islam!" a user wryly commented.

​"The murders in Morocco and the PC media: first, the fake media attempts to hush up the brutal execution in Morocco. When the people start sharing pictures of what happened, those who do so are threatened with several years' imprisonment", former Sweden Democrat leader Anders Klarström tweeted.

"I myself would never watch such a film, let alone share it. But now we are more upset about the crime of proliferation than the crime of beheading. PC people have once again upset the applecart for us", another user wrote.

"Have now seen this very strange report. A new law that has been created to protect, say, rape victims from having films of the crime spread, is now being applied to the beheading clip of the Danish and Norwegian girls in Morocco", journalist Ingrid Carlqvist commented.

"You know that you are in Sweden when Daesh murderers receive benefits, housing and protected identity, but people who post movies of what they have done can get four years in prison", another user noted.

"Torchlight marches in murdered 28-year-old Norwegian Maren Ueland's hometown of Bryne. Had the murder victim had been Swedish, torchlight march against racism and Islamophobia would be held immediately", blogger Julia Caesar tweeted.

"Have the killers already been awarded jobs at SVT?" another user inquired sarcastically.

"225 years ago Marie Antoinette suffered 'knife damage to her neck' during the French Revolution", another user scoffed at SVT's coverage.

​​Jespersen and Ueland were brutally murdered near the village of Imlil en route to Toubkal, North Africa's and the Arab world's highest peak, which is also a popular hiking and trekking destination.

I thought about posting WARNING / NSFW before this image, but to be absolutely blunt, I am fucking done with this...

The (((MAINSTREAM MEDIA))) use terms like 'injuries to their necks' so that the braindead and apathetic will continue as good little consumers - financing their own national, cultural and literal biological extermination.

If you don't want to or can't face up to the reality of where we find ourselves, maybe 12160 isn't the place for you. This is what we now face...and it is going to start in the now 'diverse' West.

This was the plan of (((THOSE))) who have opened the gates of the west to the world's effluence.

Friendly reminder - the followers of both of these desert cults are NOT like us - and they NEVER will be.

EVERYTHING about them is an anathema to us - our culture, heritage, values and people.

Neither CANNOT co-exist with us - it is an impossibility, because their ideologies demand that ultimately all alien cultures and belief systems be parasitised, subverted and conquered.

As long as society and the media continues to deny the truth about Islamic terrorism, this kind of thing will continue to happen.  Remember the American couple killed by Islamic terrorists about 6 months ago?  Same ideas in their heads about how all people are good.