The Insurrection That Never Was January 6th Anniversary 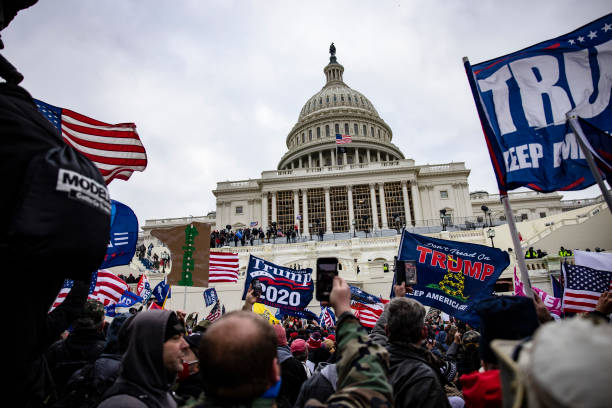 It all happened at the beginning of 2021 with the shadow of a stolen election cast upon the proceedings. Crowds had gathered for President Donald Trump’s speech. Patriots from all over America had flown in to see their duly elected President who had been swindled out of what was a landslide election due to massive, well planned, and law breaking actions of polling workers, wireless remote programming of voter machines, and officials who were part of the false flag operation. They wanted the government to delay a senile installed Manchurian candidate (Biden) to do the bidding of the shadow government. 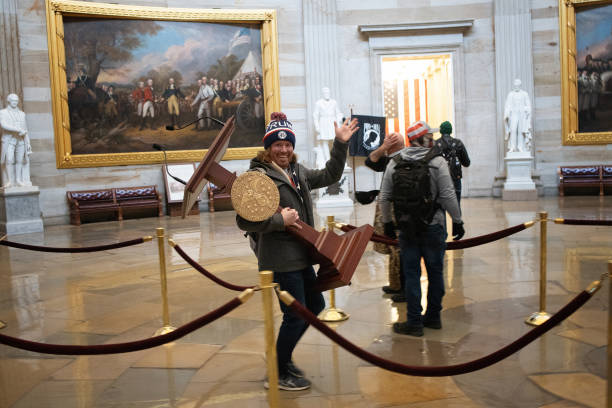 President Trump was 45 minutes to an hour away from closing down his farewell speech leaving it to his Vice President, Mike Pence, to cast the vote to determine whether or not the electoral votes needed to be re-evaluated and investigated before allowing the new illegitimate oval office occupier to take over, or capitulate. However, at the same time over at the Capitol Building some unidentified people, some Trump supporters, but others who were not part of the supporters began to tear down a barrier. The DC police for some reason were undermanned and made a request for more back up. Denied by Nancy Pelosi. When President Trump ordered National Guard troops to be sent in, that order also was countermanded by Nancy Pelosi. 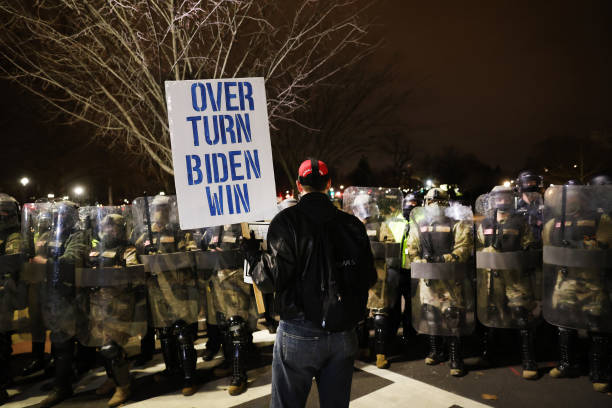 Meanwhile Capitol Police in some cases were allowing a peaceful entrance by visitors not rioters who came into the building wanting to know what had happened to their country. Embedded with them were ANTIFA members. Even though the FBI claimed no ANTIFA or BLM members were present in the building photographic evidence contradicts that lie by our federal agency. It was claimed one policeman died as a result of the violence that went on in the building when, in truth, as reported by his own family, he had died from a stroke at home. Yet, we hear from the media and Democrats there were five deaths! Really? The only death was from US Air Force veteran who was shot unprovoked by a black DC policeman who clearly was not under threat and the woman was merely climbing over an inside office makeshift barrier. 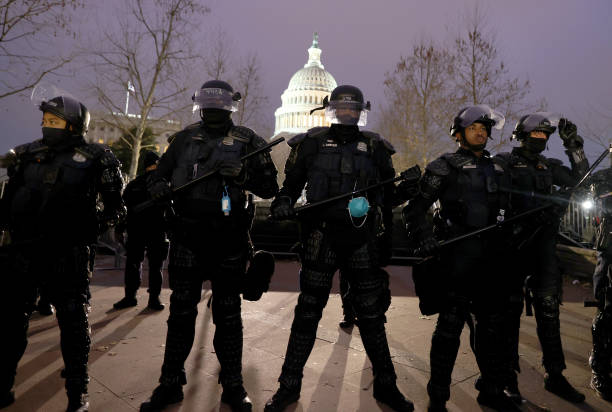 14,000 hours of surveillance tapes from a myriad of surveillance cameras have not been released for examination. There were peaceful people approaching the Capitol Building who were hit and injured by non-lethal anti-riot ordnance fired by officers who were not under assault or crowd stress. An elderly woman was hit in the foot by a DC policeman on the roof using a riot suppression projectile. Tear gas canisters were thrown at the crowd who in turn threw them back. A US Marine veteran had to pull a DC policeman off a woman then was sucker punched in the stomach so that he would be provoked into fighting. Many of the actions of the police that day seemed more about provoking violence than maintaining the peace. There were masked agitators within the crowd exhorting them to burn the place down! 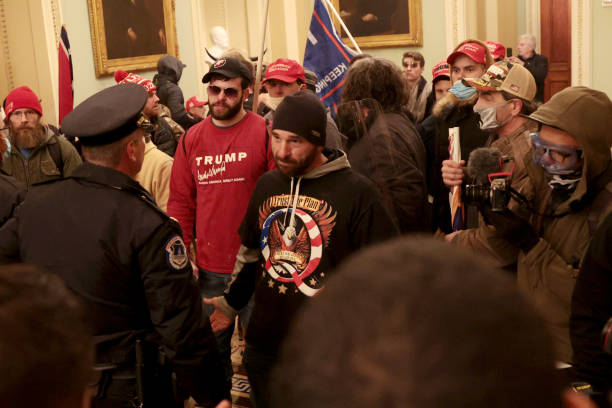 It is clear that this was all a case of planned entrapment. It is a proven fact that the FBI had their personnel embedded in the crowd. Why? It sure doesn’t seem that they did much to quell any violence that day. Who brought a trailer of pipe bombs and Molotov cocktails to the curb of the entrance of the Capitol Building and if the so-called rioters were going to conduct a resurrection why then weren’t they throwing bombs and trying to burn down federal property? We all know just months before during the summer of love in 2020 that fires were started, conservative leaders like Rand Paul were harassed while Capitol Police were conspicuously absent. Yet, we know how heavily guarded Democrats like Nancy Pelosi and Chuck Schumer would be in a threatening situation! But, in the months of summer Trump supporters in DC as tourists or attending ceremonies were assaulted, cars were attacked, and rioters who were detained were magically released where as those people who showed up on January 6th have been treated like hated political prisoners because they are! 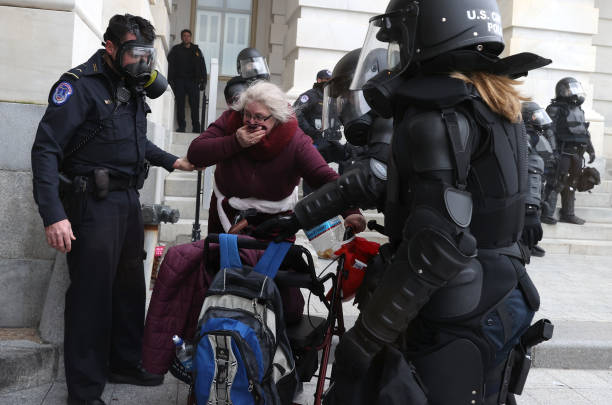 Figures are somewhat misleading, but some 270 people have been questioned, detained, and even accosted by heavily armed agents at their homes at gun point, doors busted down, and right in front of their children and neighbors! Many, in such cases were wrongfully accused because they were not on the grounds or in the Capitol Building itself or even in DC at the time! Does the term “False arrest” have meaning anymore? Presently, 100 suspects remain imprisoned indefinitely! Their families have declared bankruptcy and lost their homes, at least 2 people have died after being denied medicine or treatment, others reported they have been beaten by DC jail guards! Are these the actions of a Constitutional Republic or a Communist dictatorship? 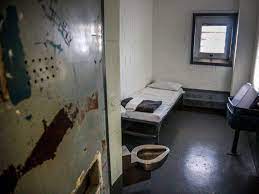 While rioters for ANTIFA and BLM committed acts of assaulting police, burning down businesses, burning police cars, blinding policeman with lasers, murdering innocent people caught in the middle of the violence, they were released or given zero bail. In Democrat run cities like Seattle, Portland, and Minneapolis police forces stood down or refused to protect property as wide spread damage to shopping malls, public property, and other outdoor facilities were left destroyed. How could this have been allowed to happen week after week? Yet, in one day on January 6th we have honest hard working conservatives who came to the Capitol Building many forced in by the crowd surge while people who have been identified as FBI, ANTIFA, and even other federal law enforcement agencies who exhorted the crowd to burn down the Capitol Building! Just ask yourself, among the so called insurrectionist not one gun or instrument of brutality was recovered! Who really were the criminals? 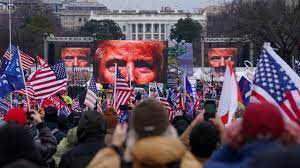 The people known to be imprisoned are being fed deplorable food, dirty water, are being harassed by the guards, refused medical treatment, and are being treated worse than the terrorists at Guantanamo Bay who have killed US troops and even murdered US guards in attempted break outs! Yet, how are these Jihadists treated? They’re given Muslim prescribed food, brand new soccer fields, vending machines, and are allowed to watch TV and movies, just the same as illegal alien detainees during the Obama administration. Remember now, we have those terrible SUSPECTS being held in the DC jail who are unconstitutionally detained, being charged with felony type violations, being abused, and these are hardworking Americans who came to the nation’s capital as concerned citizens! This is the way your federal government treats “We the People” not “We the paid agitators” “We the foreign terrorists” “We the illegal aliens”. Something is wrong in America people. The federal government is corrupt and doing the work of our enemies! Why is all this happening? Because the Democrats don’t want Trump back in office! They will do all they can whether they have to lie, cheat, and steal, even murder if that’s what it takes to keep America from being once again governed! 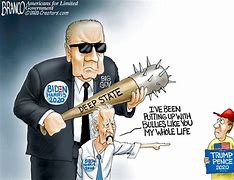 cheeki kea replied to steve's discussion I told you so na na na na na
"Thanks steve that's a good video. Funny how that little white cat seems to have a way of…"
23 minutes ago

"Hey Kea, I completely reject that thought ,these guys are shedding the so called variants caused by…"
26 minutes ago