Slovakia: Before the election, the premier rushes against foreigners

Campaign in Slovakia "We will never accept a single Muslim"

Slovakian Prime Minister Fico is campaigning with one topic: Refugees. He is not squeamish. The integration of people of other faiths can not work, he claims.

Slovak Prime Minister Fico wants to be re-elected Saturday. His favorite topic in the election campaign: Refugees. The integration of people of other faiths can not work, he claims.

Actually, the capital Bratislava is not its pavement. The city is politically dominated by intellectuals, has been conservative since the "Wende", is one of the richest regions in the EU thanks to massive investments in the West, has even left Prague and Vienna behind in this ranking. However, at the end of the election campaign, Slovakian Prime Minister Robert Fico represses his reluctance against the captains, especially since, contrary to expectation, several thousand of them have arrived for his last appearance before the parliamentary elections this Saturday. Fico gives it all, his poll numbers go down slightly in the last few days.

The integration of people with different faith and culture can not work
Robert Fico, Slovenian Premier

His words about the rising prosperity that his current government has organized are just the gallop. He starts right on his favorite topic of the election campaign - the refugees: "Also this year, more than one million refugees will come to Europe. The integration of people with different beliefs and cultures can not work. We will never bow to dictation and accept the EU quotas, "he calls into the microphone.

"The government has information from the German secret service that among the migrants also terrorists and IS fighters were introduced. The warnings of the Visegrád states (Poland, Hungary, the Czech Republic and Slovakia) have come true, the EU refugee policy has failed. "Once again he asks people if they still remember the New Year's Eve pictures from Cologne. "We do not want something like that here", he exclaims under the applause of his followers.

The Schengen borders resemble an "Emmentaler", complains Fico. And he announces fences on the borders of his country to Austria and Hungary. Objective: to not allow alternative escape routes via Slovakia and the Czech Republic to Germany. "For my government, the safety of Slovakia comes first! We will never accept even a single Muslim on the quota system! "And as an example of his resolve, he recalls that his country, before Hungary, was the first in Europe to file a lawsuit against compulsory distribution of refugees to all countries of the continent before the European Court of Justice ,

The Slovakian Prime Minister is in line with the question of refugees on a line with his Hungarian colleague Viktor Orbán. This is remarkable inasmuch as he had been his favorite enemy for years. Fico suspected the head of the Budapest government, wanting to win with ten percent of the population large Hungarian minority in Slovakia for his dream of a "Great Hungary". Today, Fico and Orbán are in complete agreement - at least on the refugee issue.

Before the EU summit, the Eastern European countries Czech Republic, Poland, Hungary and Slovakia meet in advance in Prague. They are absolutely in agreement on one point. They refuse Merkel's refugee policy.

Fico's listeners, most of them over fifty, thank him with strong applause for his recent campaign appearance. The Slovakian Prime Minister looks contentedly in the round, descends from the podium and retires with his party friends to the nearby headquarters of the Social Democratic Party Smer (direction). There the champagne bottles are cold since days. Their content is to be doused in the night of Sunday Fico's third election victory.

Never before has a politician been in power in Slovakia after the separation from the Czechs. In the meantime, Fico has trumped even the first prime minister, Vladimír Meciar, whose autocratic behavior and closeness to Moscow had thrown back Slovakia on its way to the EU and NATO.

Two years ago, Fico, exhausted, wanted to say goodbye to the government office. He aspired to the rather representative role of the President. But he lost the election crashes against the policy newcomer Andrej Kiska, who considers Merkel's refugee course right and fully supported. Kiska could not intervene because of his office in the election campaign for the parliament. Fico once again considered his chances following the defeat in the presidential campaign and decided to attack again as Premier.

How that will affect the counting of votes on Saturday night is open. The latest polls say it may not be enough for a renewed single government. "The population has realized that it does not really affect the problem of refugees," says Grigory Meseznikov of the political think tank for public affairs. "In contrast to the social needs that they feel very close."

But there is caution. In no European country so far, the forecasts so far diverge with the actual results in elections as in Slovakia. Should Fico not get the absolute majority in parliament, the currently extra-parliamentary right-wing populist national party (SNS) would be ready as a coalition partner. It represents even harder positions in relation to xenophobia than the ruling party.

That the many small bourgeois opposition parties together could beat Fico is unlikely. They are also too divided among themselves to be able to take over the government permanently.

With a few exceptions, they have made refugees as much a topic as the PM. There would have been plenty of other open construction sites: the completely underfunded social and educational policies, for example. Although Fico has pleased its country children with the reduction of VAT on basic foodstuffs. For months, pupils, students and pensioners have been traveling by rail for free through the country. There are households that parts of the high gas prices are repaid by the state. But all this is only possible because Slovakia is booming economically. Above all, thanks to foreign investment, which are lucrative given the low wages. Slovakia is still the largest per capita car manufacturer in the world.


Hungary, Poland, the Czech Republic and Slovakia allegedly want to block the so-called Balkan route for refugees. An approach that would explicitly oppose the plans of Chancellor Merkel.

The low wages but drive more and more Slovaks on the street. Eva, a 21-year-old primary school teacher, has given Fico's last election appearance. Refugees who do not exist in their country do not frighten her. "I'm really scared of the monthly view of my bank statements. I earn just over 500 euros, "she says in her small room, which is located in the apartment of the parents in the large prefabricated housing estate Petrzalka in the south of Bratislava. "I can only make ends meet because I can still live at home. After all expenses, I currently have no penny for extras. This means: a maximum of once a month cinema, no theater, no concert, no vacation. I do not think about a family or at least a small apartment of my own. Mum and dad understand. Fortunately."

At the hospitals, too, the other economic upturn in Slovakia is over. A nurse or a nurse earns little more than the teacher Eva. Most of those who can speak only a little German, hike off to Austria, such as in the local care for the elderly. Without Slovak sisters, the comparatively rich neighboring country would collapse.

The strikes for higher salaries are extremely inconvenient for Fico. The government has completely ignored the demands and then rejected them as completely exaggerated. But the next government, whoever you may lead, will have to deal with social problems. And even if Fico is re-elected, many Slovaks expect a more moderate tone after the elections. If only because Slovakia is chairing the EU Council in July. Full broadsides against Brussels or Merkel Fico could not afford in this role.

The Slovaks and their Czech neighbors have endured several occupations over the past century.

However, despite this, their culture and heritage survived.

Believe me, they are NOT about to give that up.

Slovak gun laws aren't as free as their Czech neighbors ( who also manufacture some of the best smallarms in the world) ...but I could see that changing.

Ultimately, gun laws will mean nothing as things progress.

Mate, writing in all caps indicate Dog Latin, also called Glossa. It's a bastardized grammar. Have a look at the blog "Justinian Deception. Cheers.

SO THIS GROUP WILL NOT GET IN THERE .. HUMM... HOW ABOUT LETTING THEM COME HERE.

OF COURSE THEY WILL LEAVE THEIR WEAPONS BEHIND BUT THEY CAN GET REPLACEMENT ONES HERE! 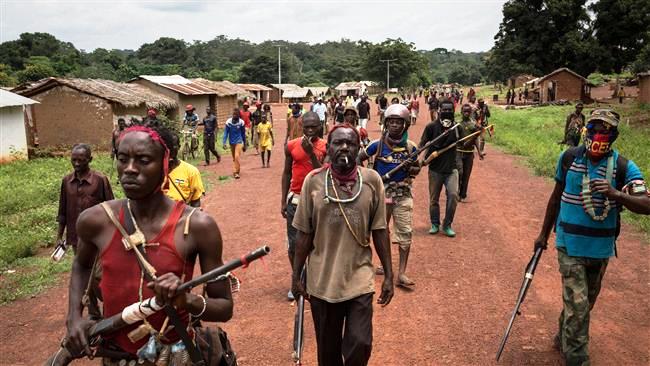 MAC replied to Chris of the family Masters's discussion Public International Notice
"Thanks Chris, good stuff, I think AUSTRALIA, NEW ZEALAND and every country under the controls of…"
17 minutes ago