You won't believe what those Israelis are saying about Jesus!

You remember this accurate description of your last life, bringing the memory with you from the realm/plane from which you came. The memory of those lives and much more are embedded within your blood if targeted cells in it were not stripped from you when you entered this one via blood transfusions or insidious drugs administered at the demand of men whose power they know you will grow to surpass and threaten, again.  The Rh negative newborns memory has been preserved in a process similar to but more complex than DNA methylation.

This is why this bloodline has been reduced to 1%, globally. This figure does not include the "jew", most of whom share a contaminated type of the gene. They are also the very developers of the "pharmaceuticals" that are oftentimes administered to these newborns, said to "save their lives through blood transfusions" performed by doctors of medicine, being predominately "Jewish" as well.

Let that set in real good.

You have never seen me go H.A.M, I assure you. You will likely understand the parts that you can not now at a later stage.

Anytime a large group of people claim to be children of my Father's kingdom yet remain isolated from the "heathen" and "damned" inside their "members only" website, one that features "Top 10 Reasons YOU Hate Atheists" discussions, I feel  it appropriate to crash the party, and inform those who ignorantly worship a god of bloody sacrifices, that they are embracing a religion that corrupts the soul not saves it.

Yeah, I was banned from a from a Christian forum this morning, charged with blasphemy.

I would have showed far more of my a$$ had I known I'd get get kicked out of the WWJD club..

Yes they have, they claim it hyers and the only thing that makes the pain go away is....eating brains!

*Although Vampires are considered a tad bit cooler.

Except when they get mistaken for a Black chicken & tossed into a frying pan.

That change is called DEATH.....as is certain.

It's all about changing, especially the Bible, science of astrology, the science of who we are.

Ever see the movie "Alien?" with Sigourney Weaver? What about it's prequel, "Prometheus?"

Eitherway, on some 'ole "Ancient Aliens" type 'chet, if there is a creator, why create us?

Necessity is the mother of all inventions.

Nothing is 100% certain in life

That 'chet was on point like a fax machine, but somehow...I doubt anyone has ever accused you of being politically correct! 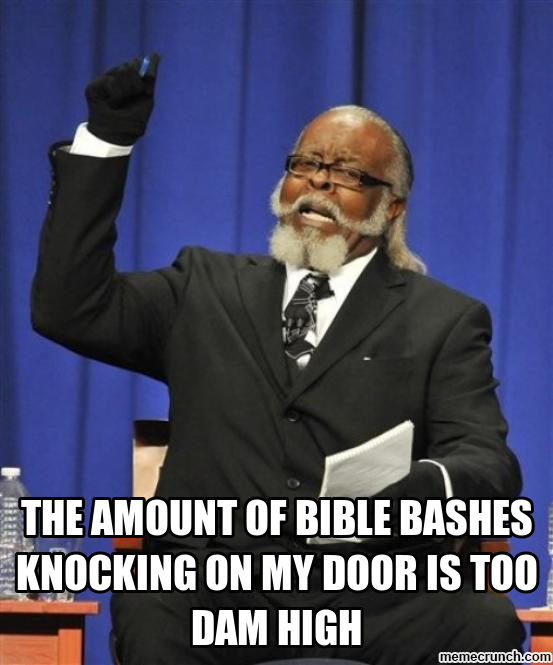 The Bible isn't pure, to many errors influenced by man, IMHO.


The Bible in its current state is worse than full of errors, it is the most insidious invention man has ever known. And John 3:16 was added to bring in the worship of death, the doctrine of the cross and the death of He who can not die and the sacrificial practices that use drinking blood and eating flesh of men. This is a "Judiac" ritual, has been for ages, and by adding it, Christian's now practice what can only be described as Cannibalistic Majic. Also, John 3:16 was not ever in the original manuscripts, it was added at the hand of the "Jew", not taken to appease them. Wherever you read that it was taken out for Jew approval should be noted as"Jew" controlled. They have controlled the Bibles contents for centuries. In fact, they were responsible for its translation into English. Again, they are only currently calling themselves "Jews". They will change that title when they destroy this era, along with all it's records and pull a new title out of their arses.
And the "Jew" owns all publishing companies and have one director. Media that is available in this hell we call America is nothing more than manufactued lies delievered and released by the same cheap whores, peddling trash that is destroying our minds and reducing the intelligence of those that are forced to exposure to their filth to that of the average rapper/ gangsta thug. See above race baitor and pet goy.

Christians, as a whole, do countless good deeds, no disputing that.

I will dispute that myself. Christians follow Jesus Christ. Whatever that entity is, it is not He who came to leave messages for man on returning to the kingdom of His Father in heaven. Furthermore, this group named Christians are not only following and worshiping the Son of Man's enemy, they behave worse than any group I've ever been forced to sit among. Judgmental, arrogant holier than thou types who peddle and sale lies and false doctrine to the innocent seeking heaven, and they have become devils by converting the innocent and trusting into sons of hell. Claiming to be "forgiven" and "saved" they preach upon elevated alters to "sinners" the fear of hell and use the terror they inflict doing so to control them and their wallets. Deliberately using the words of the Son of Man, they use their power to control every child who recognizes His voice. They then trust everything else wrote or said and are tricked into everything from giving pedophiles in robes all their money, to sending off their young sons to fight and die in wars.  Preachers use linguistics, a trance inducing techniques to manipulate listeners and always "Pass the plate" after said trance has set in.


I wouldn't accept anything from the Bible available in today's market. Not unless by God you mean the ruler of psychopathic killers. The word God did not exist in Arabic nor in Greek nor Latin but was introduced only when the language Old English was created as a stratagem, a complex weapon that enslaves minds after destroying it's ability to critically and analytically.  The language we write these posts in was created primarily to destroy the minds and souls of those who had no other place to access the words of He who many call "Jesus". Victims seek Him Who has no name fall into a hellish pit full of direct quotes of he who many erroneously call "Satan" never understanding that "Jesus" can mean EITHER  the Son of Man (who they think is named Jesus) OR the enemy of Him, (misnamed Satan). They have the same numerical value and the stratagem now enables the words of both to be interwoven in any fashion, and usually are done so in a way that deceive readers into worshiping the very enemy of the Son of Man. (He who calls our the Creator His Father)

It's about 98% inaccurate. Well unless you want to worship and embrace the religion of body mutilation, flesh eating, blood drinking, animals who butcher the genitalia of infants on alters.

I'd estimate only 15-25 statements in the entire Bible are words spoken by He who has no name but is recognized by His own.

"I desire mercy, and not sacrifice. For I came not to call the righteous, but sinners.” -Those are His words."