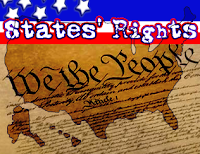 It has been the biggest week yet for states introducing bills across the board to nullify federal tyranny. The Tenth Amendment Center has highlighted progress toward halting drone use in American skies, eliminating the "indefinite detention" provision of the NDAA, promoting hemp freedom, and nullification of Obamacare. (Source)

Three states are also taking a stand against federal restrictions being proposed for gun ownership: Kentucky, Montana, and Alaska.

It has been exhaustively proven that tighter gun regulations do not result in a safer society, but in fact do help pave the way for democide. As pressure from the U.S. government to disarm the population intensifies, it is important to look at the legislation introduced by these three states as models for what can be implemented across the nation.

1. Kentucky approved bill SB 129 by a vote of 34-3, which seeks to render all federal rules and regulations as unenforceable. Significantly, it mentions gun registration:

(a) Ban or restrict ownership of a semi-automatic firearm, magazine, or other firearm accessory; or

(b) Require any firearm, magazine, or other firearm accessory to be registered in any manner.


The one-page bill can be found in full HERE.

Contact your state Representative. Strongly, but respectfully, let him or her know that you want them to vote YES on SB129.


2. Montana introduced House Bill 302, which, as The Tenth Amendment Center states, doesn't even have "to rely on the goodness, courage, and constitutional understanding of their own local Sheriff – HB302 would make it state law that no state agent, agency or peace officer working in the state of Montana would be allowed to enforce such violations of the 2nd Amendment."

This statement is important, as it has been argued that even though hundreds of sheriffs have declared that they will not comply with federal demands, there is plenty to suggest that many already have compromised the rights of citizens in the past and very well could be willing to stand aside if federal pressure becomes too intense.


Montana's two-page bill seeks to address this possibility by prohibiting compliance, even with a ban on semi-automatic weapons and large capacity magazines. Additionally, it highlights that taxpayers shall rightly direct the course of action when expending public funds, deeming to criminalize their unauthorized use. Section 3 states in part:


The full Montana bill (.pdf) can be found HERE

Contact your State Senator. Make sure they know you want them to vote YES on HB302. If the federal government is going to try even more attacks on the 2nd amendment, Montana will not have ANY part of it. And, by doing so, Montana will help play an important part in the demise of such unconstitutional plans.


3. Alaska has passed House Bill 69, The Second Amendment Preservation Act, by a margin of 31-5. The bill focuses on the right of the state of Alaska to supersede any Congressional regulation that should seek to end-run the state through interstate commerce laws:


The bill goes on to highlight that it is a class B misdemeanor punishable by a $2,000 fine and up to 90 days in jail under AS 12.55 for, "an official, agent, or employee of the federal government who enforces, attempts to enforce a federal statute, regulation, rule, or order that is unenforceable under this section."

The full text of this bill (.pdf) can be found HERE

Contact your state Senator. Strongly, but respectfully, let him or her know that you want them to vote YES on HB69.


Alaska representative Mike Chenault stated perfectly the sentiments of those who wish to preserve the bedrock of freedom, even as we acknowledge that tragedies using firearms will occur: "Tragedy is not a license for federal encroachment of constitutionally protected freedoms."

There is a simple reason why tragedy can never be permitted to re-write essential freedom: the possibility that tragedies can be manufactured by the very government that later rides in to make emotional appeals for sweeping changes. It has happened before, and it is sure to happen again.

It is a positive sign that the hard work of activists on many fronts is finally coming to fruition and coalescing to such a degree that states are clarifying and solidifying their lines in the sand.
Main source for this article:

The Tenth Amendment Center -- Please visit and donate to their tireless efforts to preserve freedom and uphold the principles of our Constitutional Republic. Also visit their page for model legislation to preserve the Second Amendment. Get their free newsletter here.

DazNick is now a member of 12160 Social Network
6 hours ago
Welcome Them!

During the opening ceremony for the European Figure Skating Championships 2023 in Espoo Finland, a 59 year old man by the name of "Minna-Maaria" Antikainen f...
15 hours ago
0 Comments 0 Favorites

"I guess we'll have the climate change then and get it Over with. Loser."
21 hours ago