Back from recess, Congress to consider bill to vote from home! 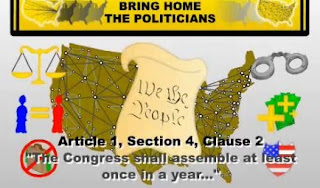 With Congress back from its 4th of July recess, it will consider a
bill introduced by Democrat Representative Eric Swalwell of California.

Rep.
Swalwll's bill proposes that Congressfolks be able to vote from home,
citing the technology exists to make this possible and secure. However,
the details of Representative Swalwell's proposal seem a bit sketchy at
present.

Regular readers will recall that this writer wrote an
article supporting a similar, but non-partisan, grassroots, proposal to
Bring the Politicians Home (aka http://eCongressNow.com)
on March 9, 2012. (In fact, a link to the website of the organization
who made that proposal has been in the closing credits of almost all of
this writer's articles since that date)


The convenience of Congress folks is not high on the list of advantages touted by Bring Home The Politicians.

First, Bring Home the Politicians does not support a willy, nilly free for all vote from where ever you are format.

Rather,
Bring Home the Politicians proposes that each Representative should
have an office in their district which is upgraded to......

Please join with me in mutually pledging to each other and our fellow
citizens our lives, our fortunes and our sacred honor to our mutual
endeavors of restoring liberty and economic opportunity to WE THE PEOPLE
as our Founding Fathers envisioned and intended. [Last Paragraph,
Declaration of Independence http://bit.ly/ruPE7z ]

This article is written with the same intentions as Thomas Paine http://ushistory.org/paine. I seek no leadership role. I seek only to help the American People find their own way using their own “Common
Sense” http://amzn.to/kbRuar

Critical Thinking Notice - This author advises you as no politician would dare. Exercise Critical Thinking (http://bit.ly/ubI6ve)
in determining the truthfulness of anything you read or hear. Do not
passively accept nor believe anything anyone tells you, including this
author... unless and until you verify it yourself with sources you trust
and could actively defend your perspective to anyone who might debate
you to the contrary of your perspective.

This one figures. Now, with the ever growing prominence of computerized banking and cell phones, there is no reason for the mewling congress to travel to D.C. to do their 'special dance' to collect bribes. A photoshopped video gets the point across and any 'special performances' can be arranged on a case by case basis.

DazNick is now a member of 12160 Social Network
5 hours ago
Welcome Them!

During the opening ceremony for the European Figure Skating Championships 2023 in Espoo Finland, a 59 year old man by the name of "Minna-Maaria" Antikainen f...
14 hours ago
0 Comments 0 Favorites

"I guess we'll have the climate change then and get it Over with. Loser."
20 hours ago