The Tablets of Thoth are imperishable, resistant to all elements, corrosion and acids. In effect, the atomic and cellular structure is fixed, and no change can take place, thus violating the material law of ionization, according to Bibliotecapleyades.

Upon them are engraved characters in the Ancient Atlantean language; characters which respond to the attuned thought waves of the reader and which release much more wisdom and information than the characters do when merely deciphered. The Tablets are fastened together with hoops of a golden colored alloy suspended from a rod of the same material. 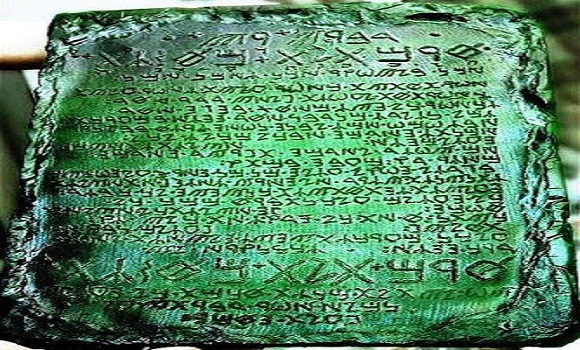 Dr. M. Doreal has translated this Work, and has published through the Brotherhood of the White Temple, a translation of ten of these twelve Tablets. He has divided the ten into thirteen parts for the sake of convenience. The last two Tablets are found in the “Interpretation of The Emerald Tablets”, also by Dr. Doreal.

When Thoth, the Atlantean and Master raised the people of Khem (Egypt) to a great civilization, and when the time came for him to leave Egypt, he erected The Great Pyramid over the entrance of the Great Halls of Amenti. In the Pyramid, he posited his records and appointed Guards for his secrets from among the highest of his people.

In later times, the descendants of these guards became the Pyramid Priests, while Thoth was deified as the God of Wisdom, the Recorder, by those in the age of darkness which followed his passing. In legend, the Halls of Amenti became the underworld, the Halls of the Gods, where the soul passed after death for judgment.

During later ages, the ego of Thoth passed into the bodies of men in the manner described in The Emerald Tablets, a Book of Record and Occult Wisdom which he wrote and left in the Pyramid for those of a future Age of Light.

This is the First episode on the Emerald Tablets and its engravings by Lou Bernedetto, written by Thoth, the Atlantean from the Lost city in Time of Atlantis. Thoth is an imortal who was once a very long time ago a regular human being who lived in a time over 50 000 years ago

Donald Trump Jr. issued a dire warning on the threat of vaccine passports. Trump Jr. said that Democrats were going to try and use them to track Americans.
27 minutes ago
0 Comments 0 Favorites

Phyllis Maka commented on Phyllis Maka's blog post Family members are speaking up about the vax totally changing others in the family that got it. - Jim Stone
"Someone an NWO TROLL has a stick up his ass does not like what I post why is there TROLLS on this…"
1 hour ago

Phyllis Maka commented on Phyllis Maka's blog post Family members are speaking up about the vax totally changing others in the family that got it. - Jim Stone
"why am I suspended?"
2 hours ago

"Have to go through hoops to get on this site from Google and DuckDuckGo. No problem on Safari."
2 hours ago

Doc Vega commented on Doc Vega's blog post A quick Journey on the King Crimson Highway of Enlightenment
"And to the 88.7% of the Maxi Pad using targeted audience I'd have to defer to trusted…"
4 hours ago

Patrick C Conway favorited Phyllis Maka's blog post Family members are speaking up about the vax totally changing others in the family that got it. - Jim Stone
6 hours ago

cheeki kea commented on cheeki kea's blog post SAY THE DAMN PRONOUNS !!
"If there's one collective person who can serve up an insult like no other it is Of Cause the…"
8 hours ago

Phyllis Maka commented on Phyllis Maka's blog post Family members are speaking up about the vax totally changing others in the family that got it. - Jim Stone
"My hubby got vaccinated twice the free flu shot you get it once a year. He dropped dead at his job…"
9 hours ago

Less Prone commented on Patrick C Conway's blog post What is going on with 12160?
"Doc Vega, There is plentiful propaganda about Germany from the beginning of the last century until…"
10 hours ago

cheeki kea commented on Phyllis Maka's blog post Family members are speaking up about the vax totally changing others in the family that got it. - Jim Stone
"I think for the vaxxed up there's a sense of sacrifice on their part and that very action in…"
10 hours ago

"All bachelors, wake up. There's a rich widow in England, if only you can stand her guts for a…"
10 hours ago